Smart, structured training took Scott, an already-strong rider, to the next level.

Through a training programme with Njinga recorded an impressive FTP score of 297 watts and new PB.

Impressive power to weight score  of 4.14 watts/kilo through training with Njinga and new PB

Supplementing my long outdoor rides with structured, training zone-specific classes twice a week meant my pedal technique improved and I was more disciplined during my races and ride-outs.

I've been cycling for most of my life with BMX and mountain bikes. In the last ten years, though, I've transitioned more to road cycling than anything else.

I’d seen the Njinga Lab on a number of occasions coming back home from my rides and decided to try out one of their classes in December 2015 to escape the winter and keep my fitness levels up.

The camaraderie of the Collective is infectious, and helping and supporting others to ride up hills around the country and break their 100 mile barriers has been unimaginably rewarding.

I very quickly realised this wasn’t just a spinning class.

The combination of wattbikes and power zone-specific training made each class as effective as possible.

The power zones enable you to train in line with what you’re trying to achieve: for example, a recovery ride in zone two or three or an endurance ride in the sweet spot of zone 4 and 5 for when you need to get used to hard efforts.

For me, the Lab classes were great as I was able to get a feel for the zones and then translate them to my outdoor rides with my power metre.

Couple this with Njinga’s thorough stretching sessions (one after each class does the trick) and one of their protein recovery drinks and you’ve got yourself a balanced and complete workout routine! 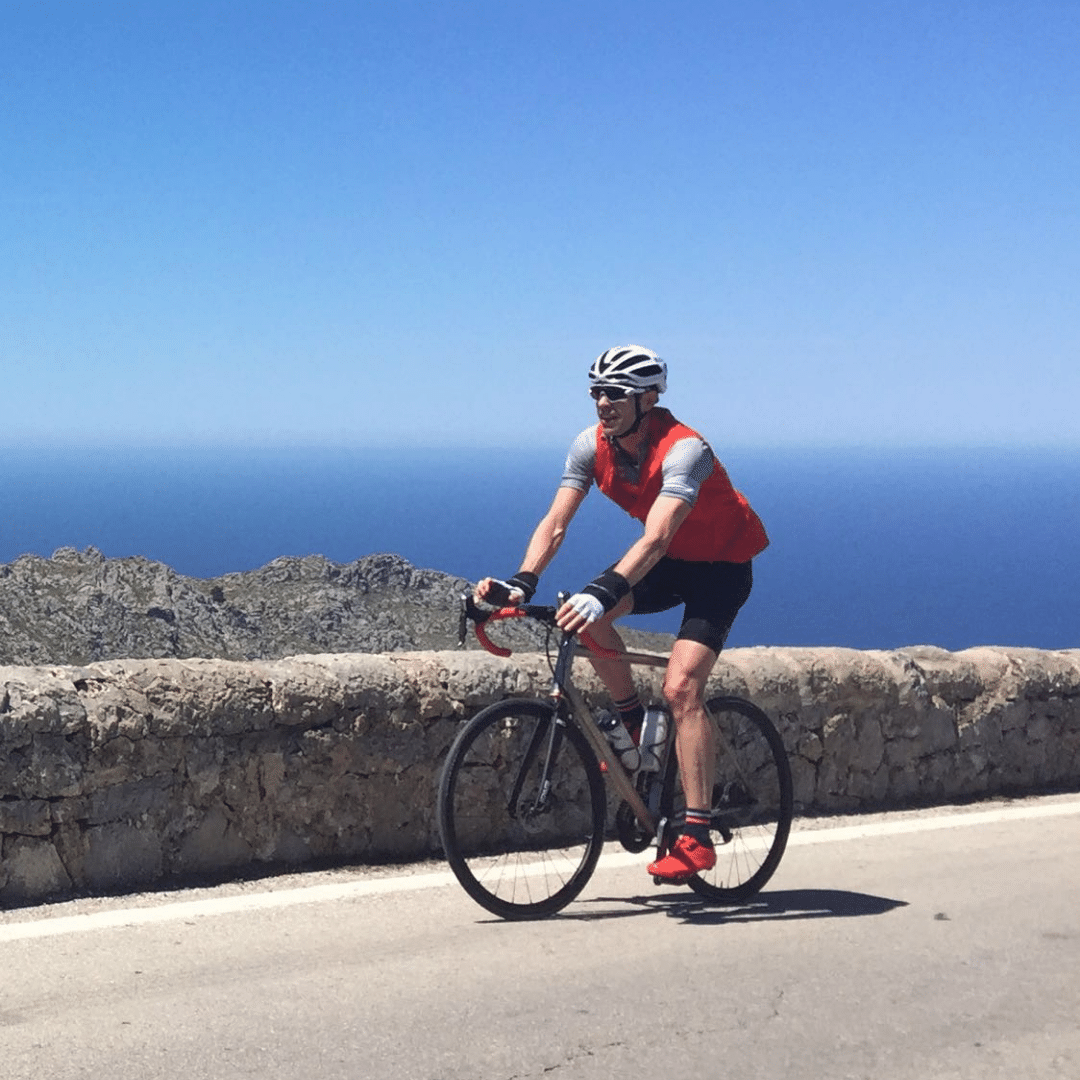 Scott cycling in South Africa in the Cape Rouleur.
. 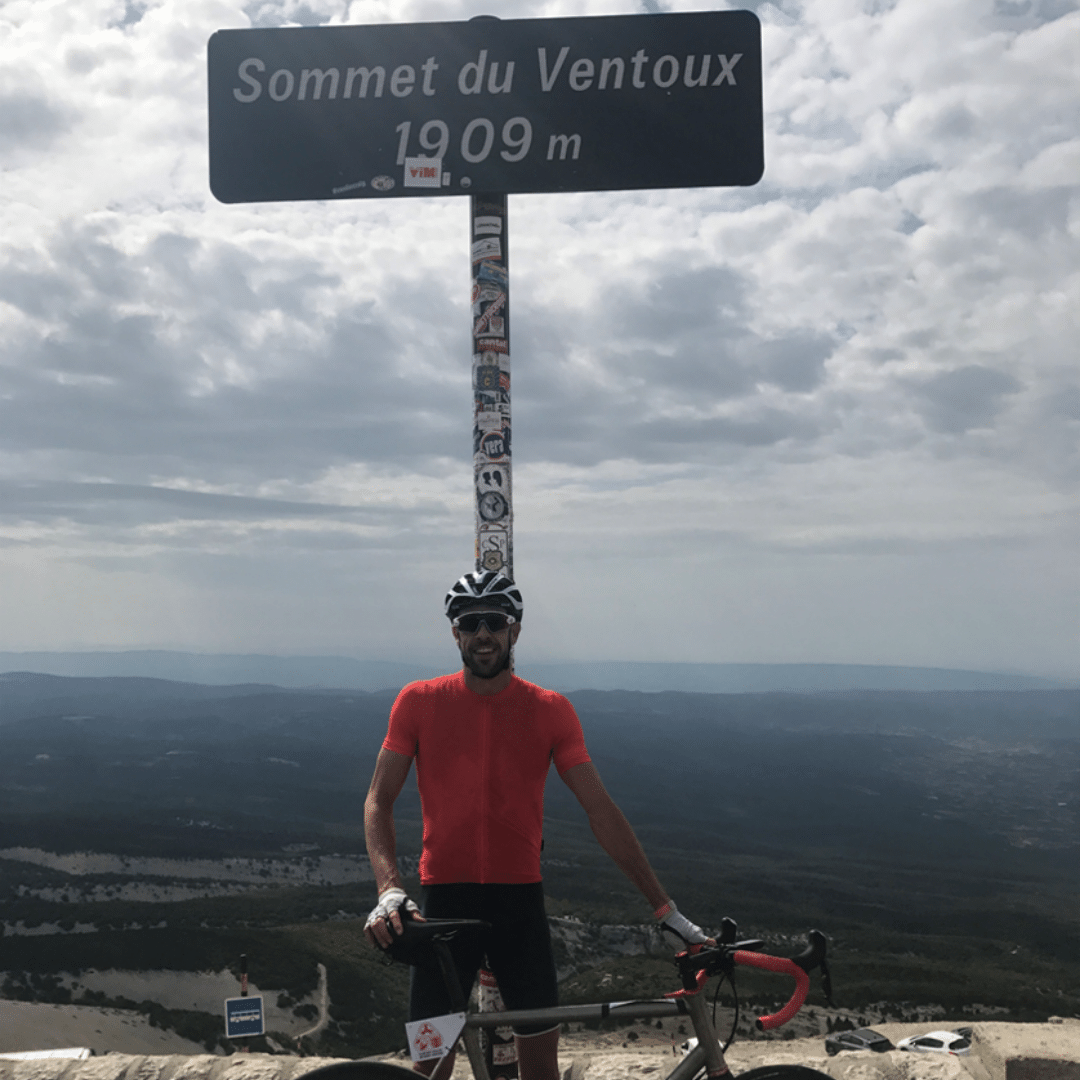 Scott at the top Mont Ventoux having conquered it 3 times in 24 hours. 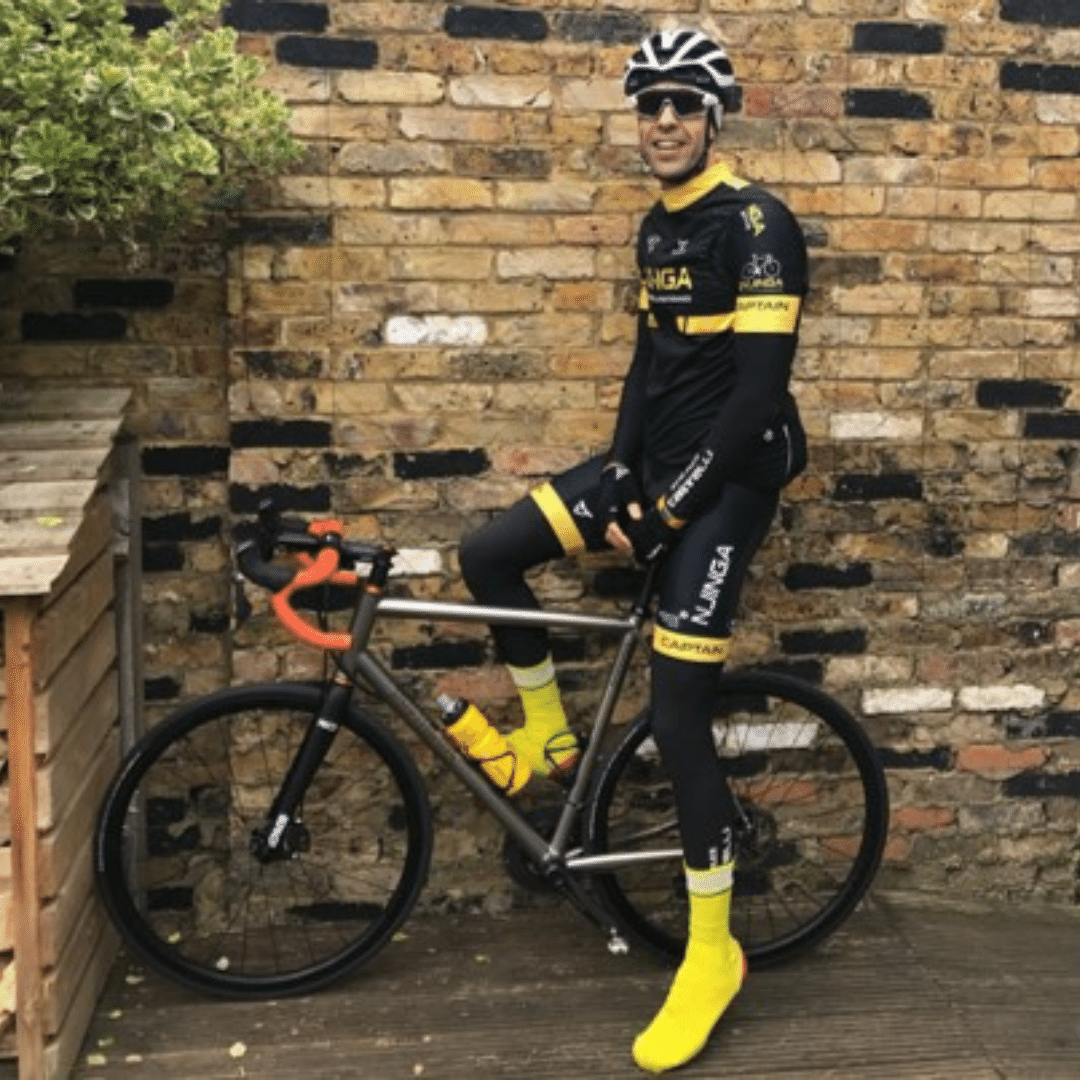 In January 2016, just one month after I’d started the indoor Lab sessions, I signed up for the FTP Booster programme which I used to help me – very effectively – train for the Cape Rouleur and Cape Town Cycle Tour race.

I was more disciplined during my races and ride-outs.

Though I didn’t intend to have a goal for the South African events – and that wasn’t really the point of my trip; it was more to enjoy riding through areas of the country I grew up in – doing the FTP Booster programme meant that I was able to qualify for Group 1 in the Cape Rouleur (from a time trial) and also stayed within the top 25% of riders.

In 2017, I stepped up as a Ride Captain for the Njinga Collective – Njinga’s not-for-profit outdoor riding group – which gave me the opportunity to give-back to Njinga and its crew for all the help I’ve received in making me a stronger, better cyclist.

The camaraderie of the Collective is infectious.

I have found helping and supporting others to ride up hills around the country and break their 100 mile barriers has been unimaginably rewarding.

My goal was to become a member of Club des Cinglés by climbing Mont Ventoux by the three traditional ways – from Bedoin, Malaucene, and Sault – all in one day.

My preparation involved a one-on-one rider consultation with Togo and a structured training plan.

I’ve also attended a number of Njinga’s yoga classes which have been a great way for me to improve my flexibility and prevent injury, too.

Thanks to Njinga, its 360 degree approach and thorough training methods, I completed the Club des Cingles challenge and am now a proud member of the club! 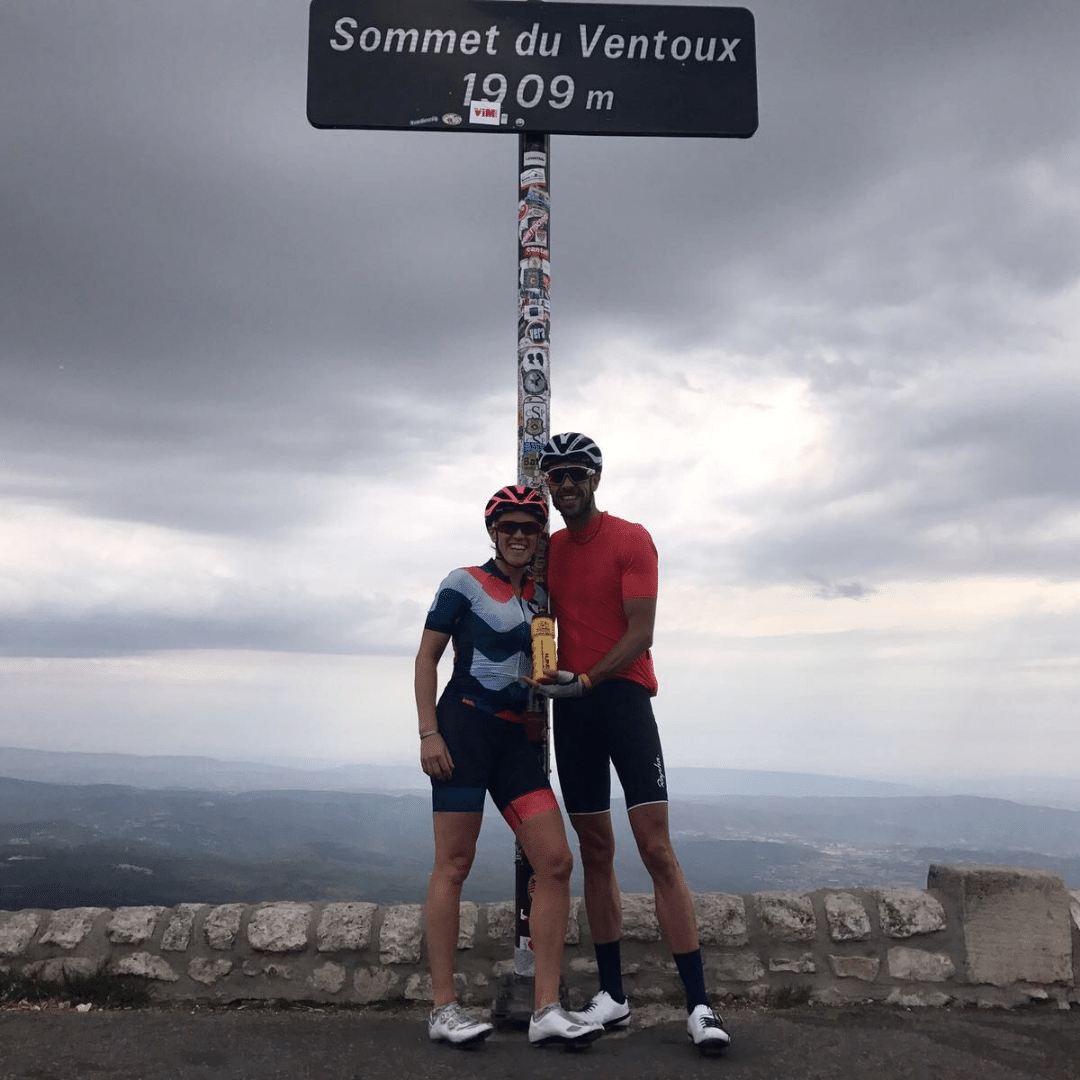 Scott and his wife Ruth at the top of Mont Ventoux after becoming a member of Club des Cinglés. 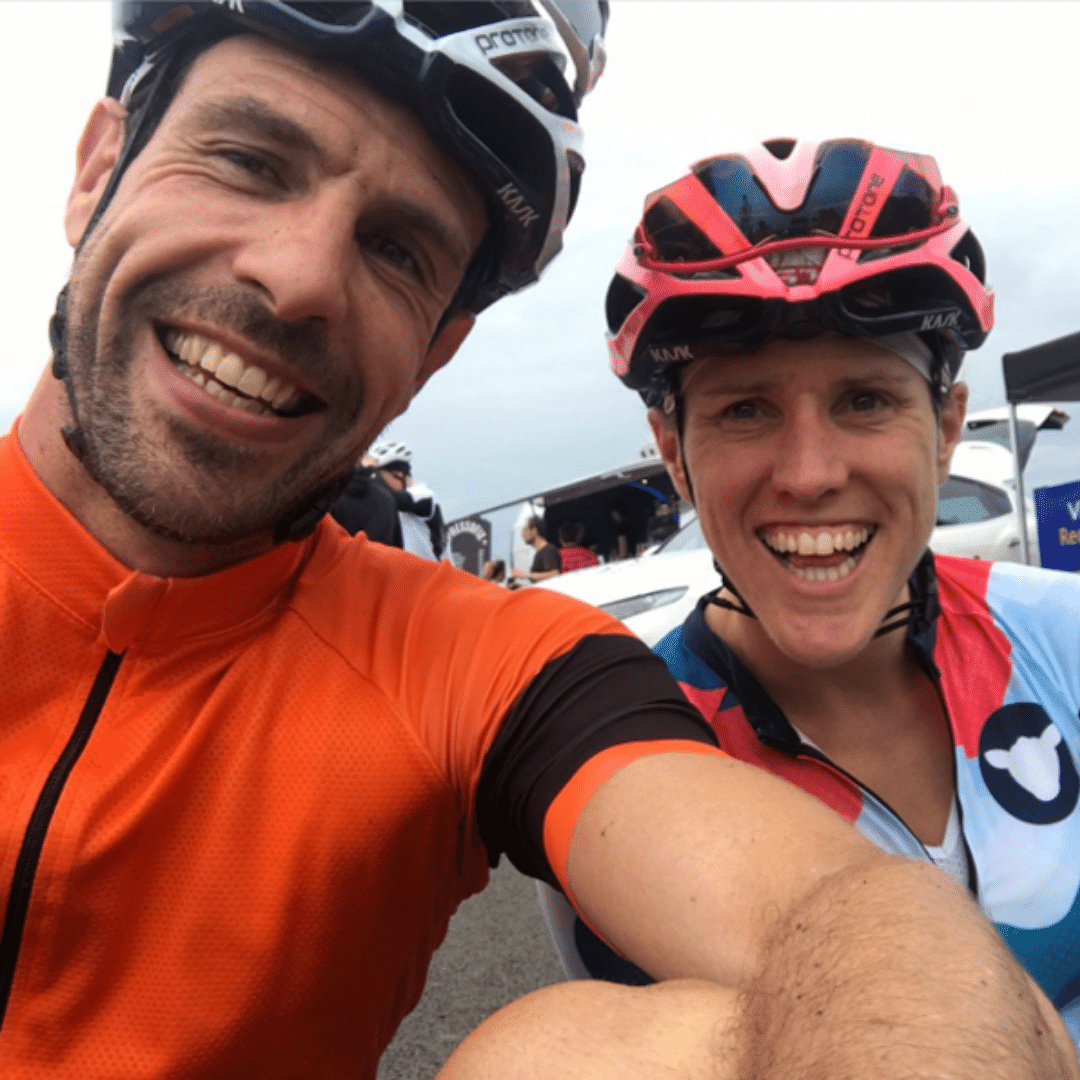 Scott and his wife Ruth whilst completing their Mont Ventoux challenge. 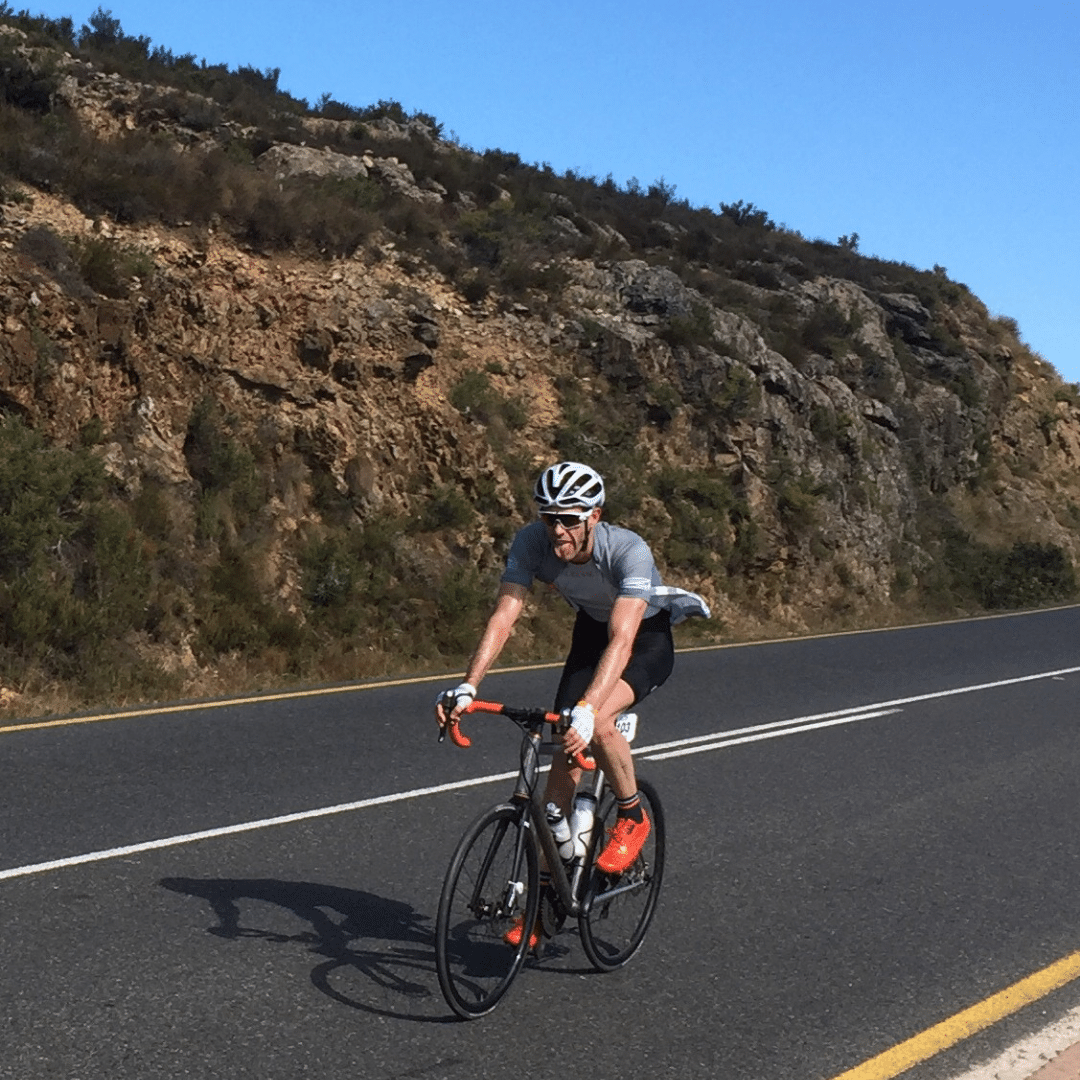 Scott cycling in South Africa in the Cape Rouleur. 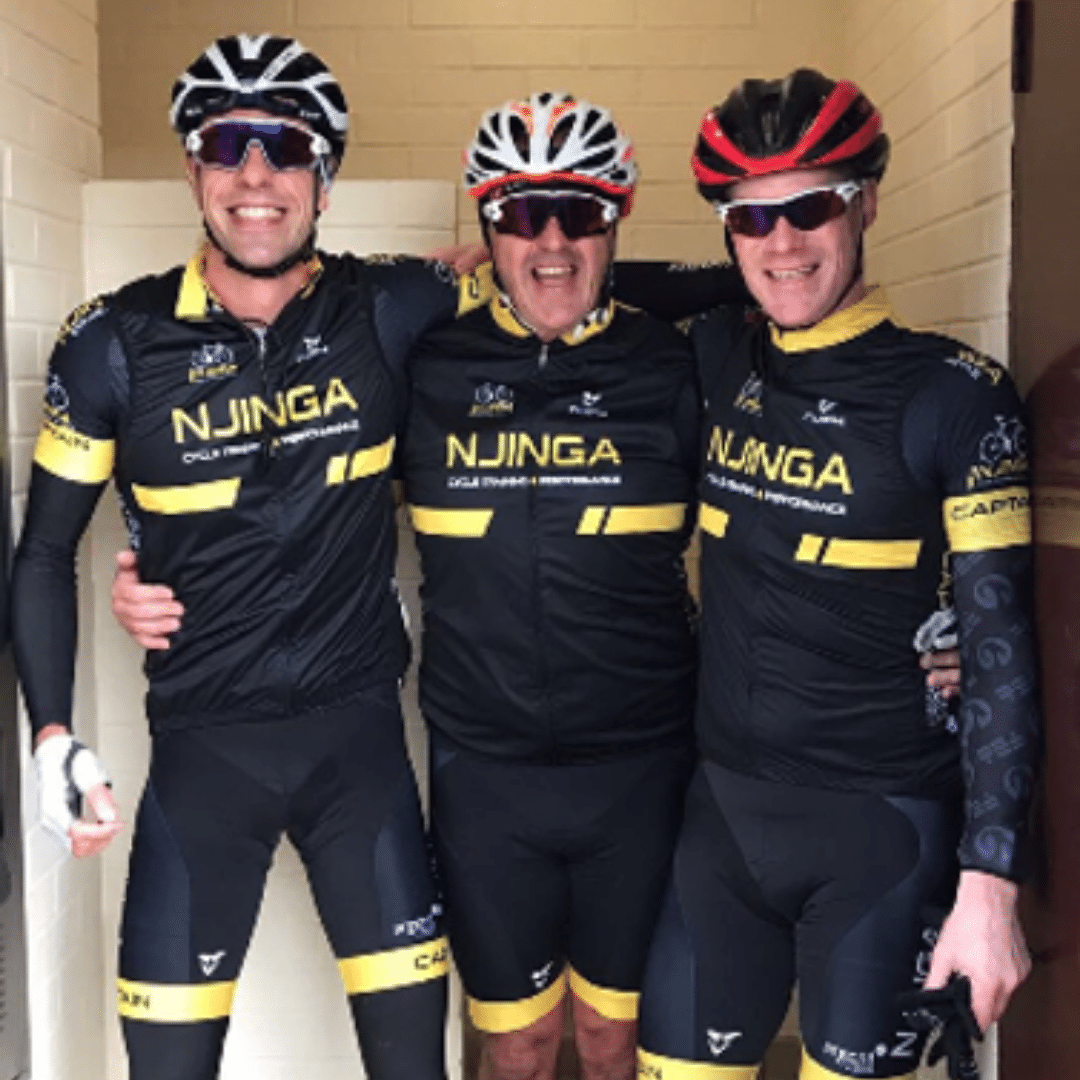 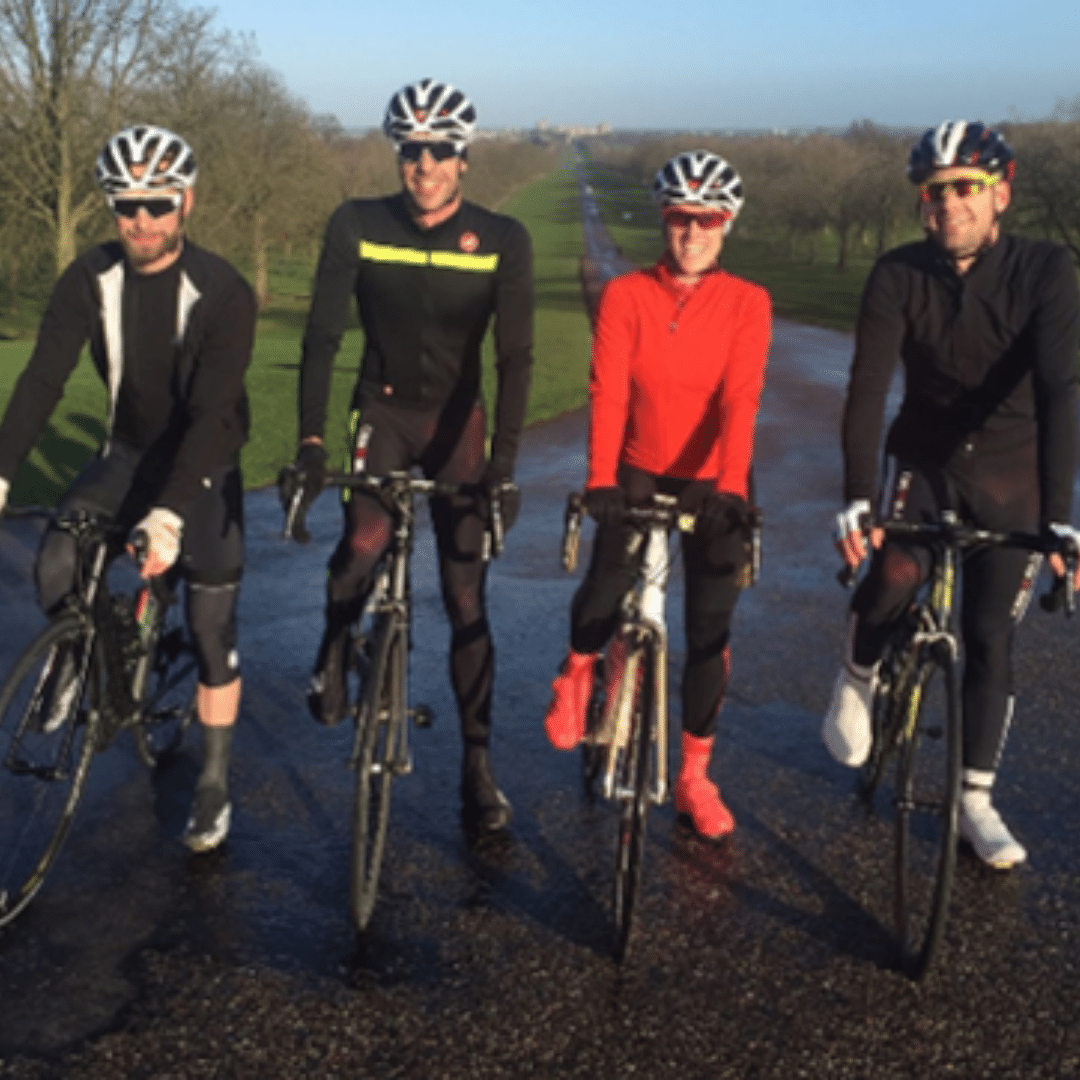 Scott on a ride out to Windsor.

Doing the FTP Booster programme meant that I was able to qualify for Group 1 in the Cape Rouleur (from a time trial) and also stayed within the top 25% of riders.
WHERE IS SCOTT NOW?

Scott's journey with Njinga has been incredible. He has gone from a strong sportive rider to a multi day stage racer and mountain goat climbing sensation.

When I first met Scott he was softly spoken and quite unassuming but once I put him on the wattbike he totally changed. He was a strong rider that simply needed to improve his climbing power, stamina and race sharpness to compete competitively . Adding structure and progressive focused training sessions around building stamina and muscular strength paid dividends. We achieved Scott’s power to weight goal of over 4 watts per kg to be able to race while still climb with authority.

What impressed me most about Scott was his work ethic and mental toughness. He became one of our strongest climbers in Njinga so seeing him conquer one of the most iconic Tour de France climbs 3 different ways to make the Club des Cingles was special.

Scott (& his wife Ruth) also became a member of the Njinga Collective, our not for profit cycling club and after his first season he qualified as a Njinga Ride Captain. Then later that year he represented the Njinga Collective at the Giro de Sardegna multi day stage race in Italy. Scott just loves cycling and always had a big grin on his face whenever he is on the bike.

Scott was a great mentor to many of our new riders within Njinga, helping them along their cycling journey and now more recently became a father and is enjoying a break from the bike while having a family.