From a newbie road cyclist to a confident rider who has gone on to conquer some iconic climbs and ride a UCI course.

Completed a charity cycle event for StandUp2Cancer: 106km in 3h49m.

What got me through to the finish line – and with a time of 3h12m – was what Njinga taught me about riding through the pain and not giving up.

In early 2016, I suffered an ankle injury which forced me to stop running. It was by chance, then, that it was around this time that I discovered Njinga.

When I walked into Njinga for my first training session, I remember seeing all these really fit and professional-looking people in cycling outfits and thinking, "uh oh! I might be out of my league here." This was, of course, not the case at all: the instructors and everyone who attended the sessions were so friendly, welcoming, and encouraging.

Before I knew it, I was hooked.

I started doing 2-3 training sessions a week along with tracking my progress through FTP tests.

In August of the same year, I bought my first road bike: a Cannondale Synapse! I'll never forget my first ride in Richmond Park where I successfully managed to clip in and out without falling over AND take my water bottle out of the cage whilst riding. What an achievement! (If you know, you know.)

In early 2017, I decided to do one of Njinga's indoor training programmes to help improve my overall fitness.
As well as the cycling side of it (obviously), the programme also include nutrition and pedal technique workshop components.
It's amazing to see the difference your pedal technique can make to your overall power on the bike.
Particularly when you: a) manage to get to 50:50 on your left vs. right leg, and b) when you stop stomping like an elephant and start riding like an Italian stallion.

While I continued with the indoor training sessions, I really wanted to start cycling outdoors with the Njinga Collective, Njinga's not-for-profit outdoor cycling group. The challenge was that I had no experience riding on the road or in a group, so I started to pester Togo and Leigh to run a training programme for new riders like me who needed to build basic road cycling skills and confidence.

In March 2017, my pestering paid off:
Njinga launched a programme for new riders like me who had never done any road cycling.
It was great for all the technical aspects of group riding, signalling, safety checks, and improving your overall fitness.

All the ladies who attended that programme with me have become fantastic cycling buddies and are among my closest friends.

Getting out and onto the road with the Njinga Collective

Later that summer, the Njinga Collective started a new speed group called Mbidzi (12-13mph average) designed to support the riders of the programme.
Mbidzi involved shorter rides and was aimed at building up confidence and kilometres as we progressed. 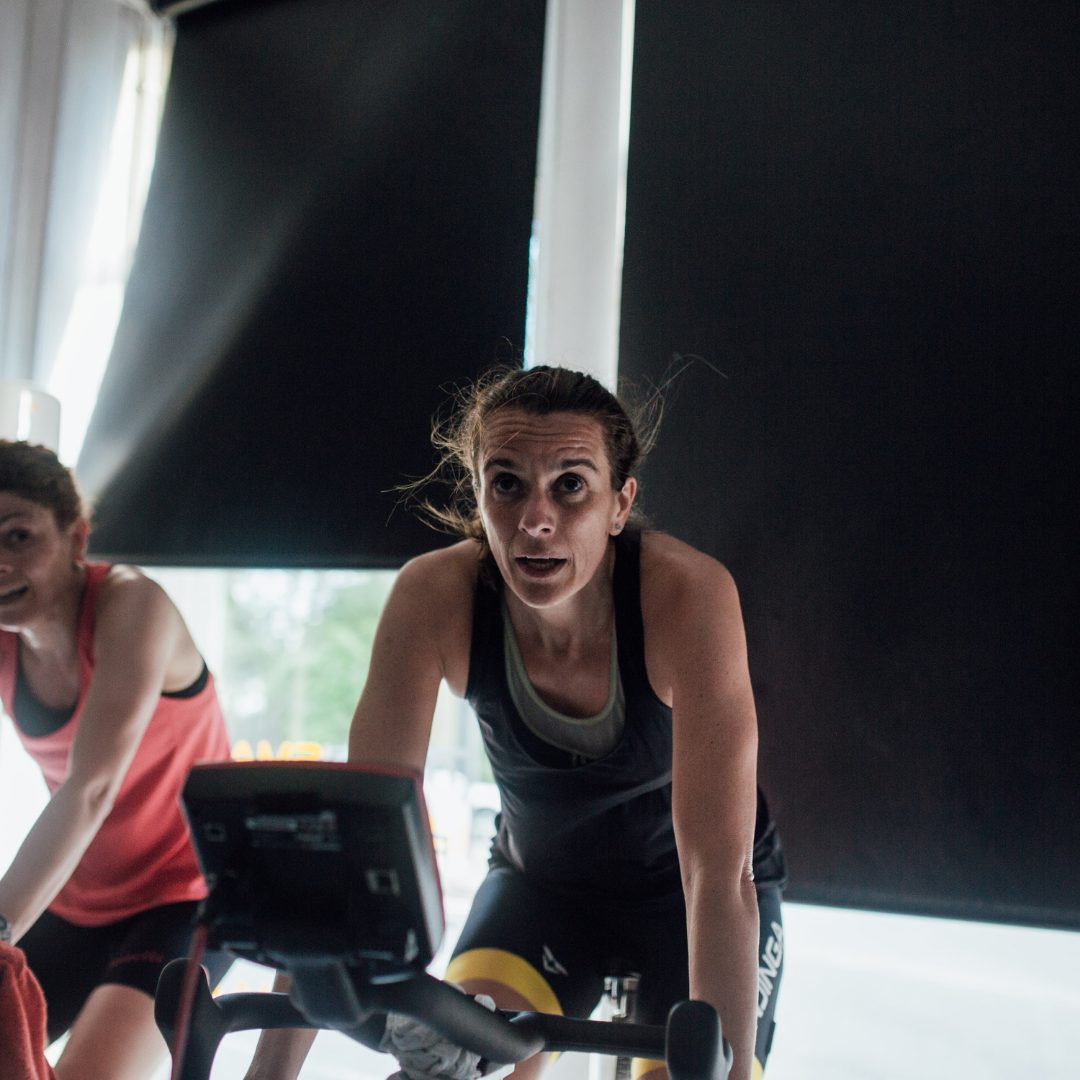 Kat during a indoor group class at the Njinga Lab. 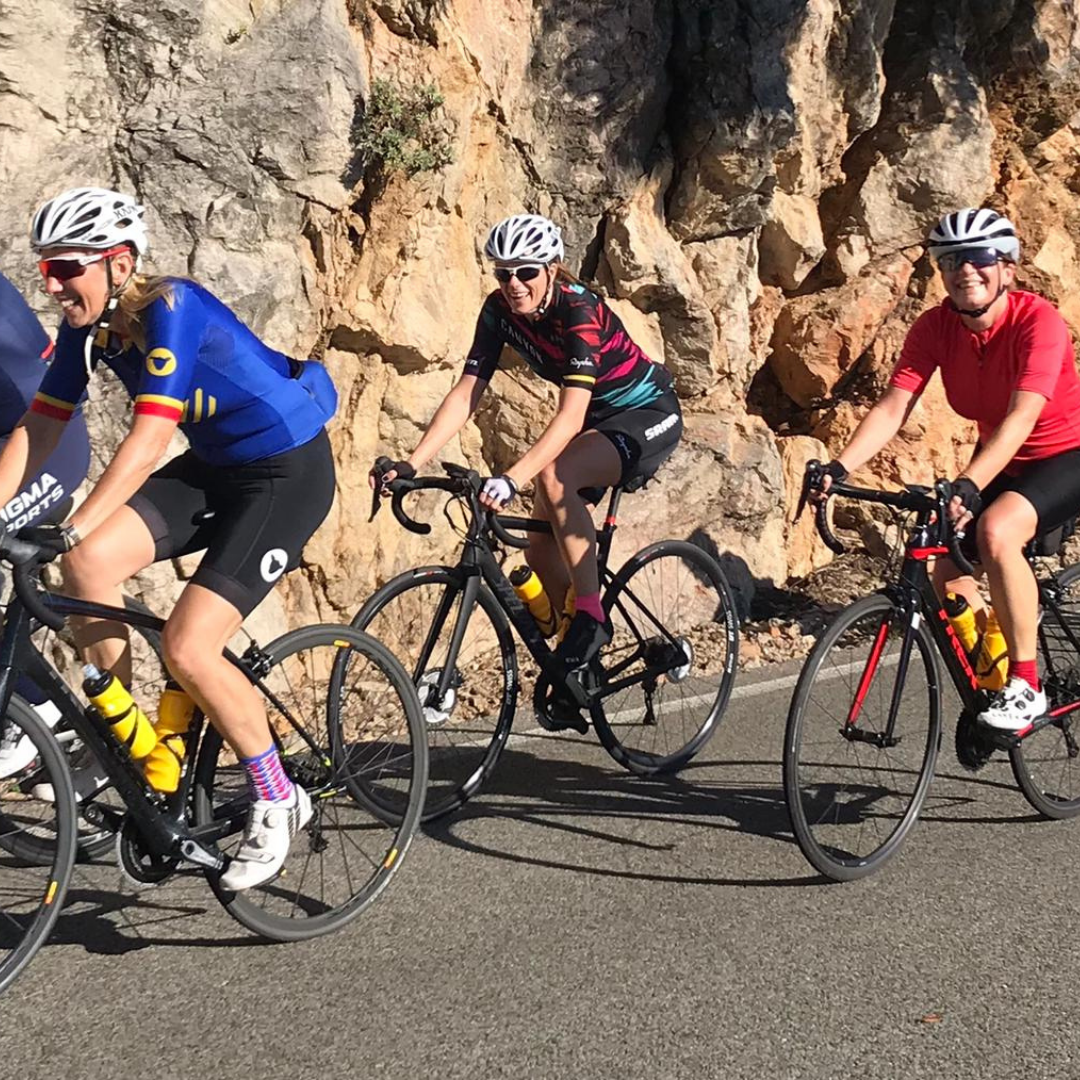 Kat on a cycling trip in Portugal where she conquered the climb of Monchique via Foia and completed her biggest ever hill climbing day.

The Collective is such a great way to enjoy cycling: not only do you get to explore different routes but it's a really social affair, too, and everyone meets up for coffee and cake at the end of each ride (always the best bit!). The routes we take are varied and, at times, challenging. And as you improve, you have the opportunity to progress through the different speed groups.

In September and October 2017, all my hard work started to pay off: I competed in several events, all of which pushed my endurance.

The first event I completed was a charity cycle event through work for StandUp2Cancer. I took part on the last day which was from Oxford to Solihill, a total of 106.6km.

My time was 3h59m. It was a huge milestone for me to have completed this distance.

And at the same time, I personally raised over £1,500 to help beat cancer, a cause close to my heart.

I also completed the London Half Duathlon in Richmond Park in early September and another half duathlon at Dorney Lakes in early October.

In October 2017, I went on my first overseas cycling trip to Mallorca as part of the Njinga end-of-season social.

Having never done a cycling holiday, I had no idea what to expect, but Njinga passed all my expectations. All the meals cooked by Leigh were fantastic; the routes we cycled took us through beautiful countryside; and we even got to enjoy a few glasses of wine each night.

Everyone got along brilliantly: we enjoyed a laugh and giggle without forgetting the ultimate purpose of the trip, of course.

My personal achievement from the trip was to conquer the famous climb of Sa Calobra under an hour, the target I had originally set for myself. 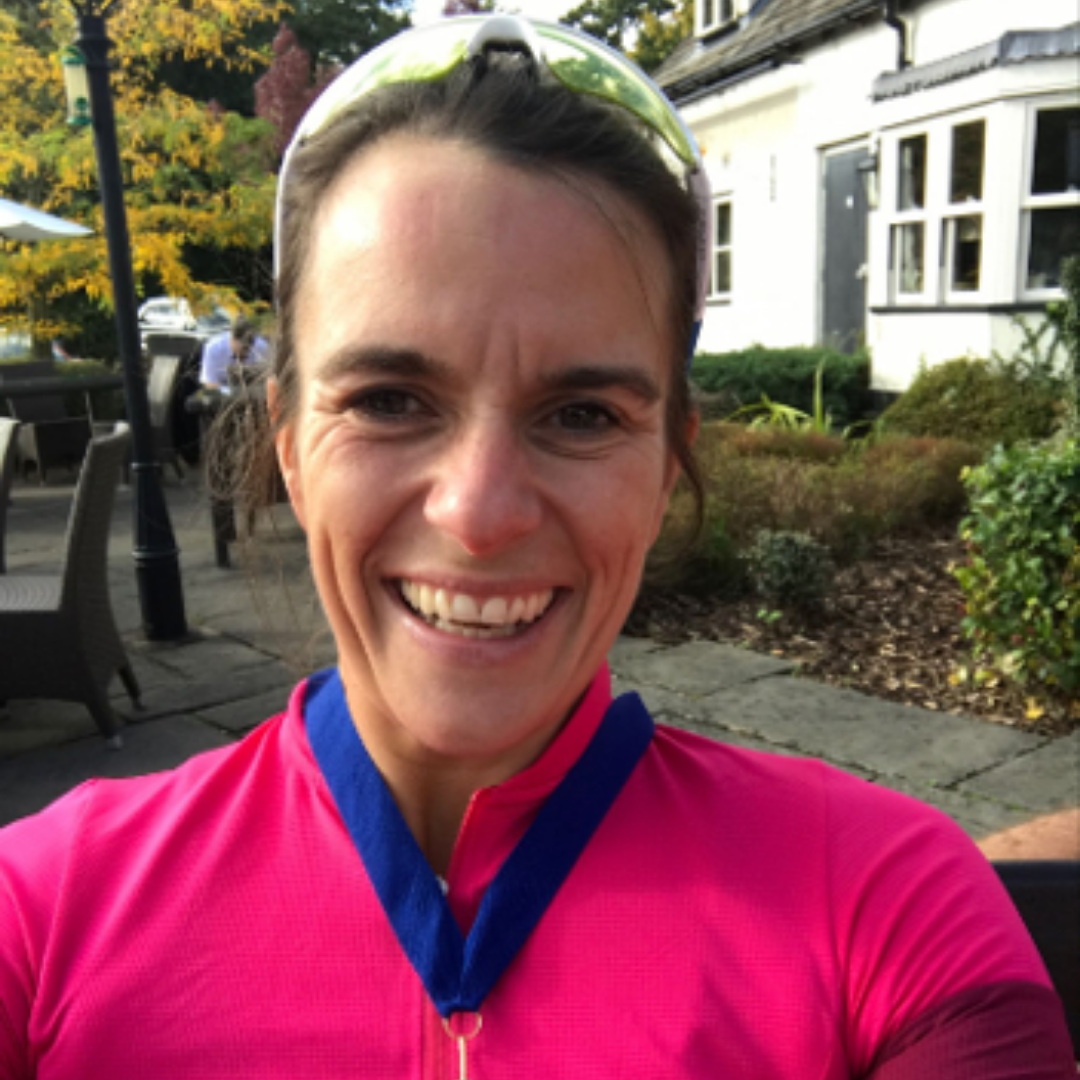 Kat with her medal at the end of her Standup2Cancer 160.6km charity ride. 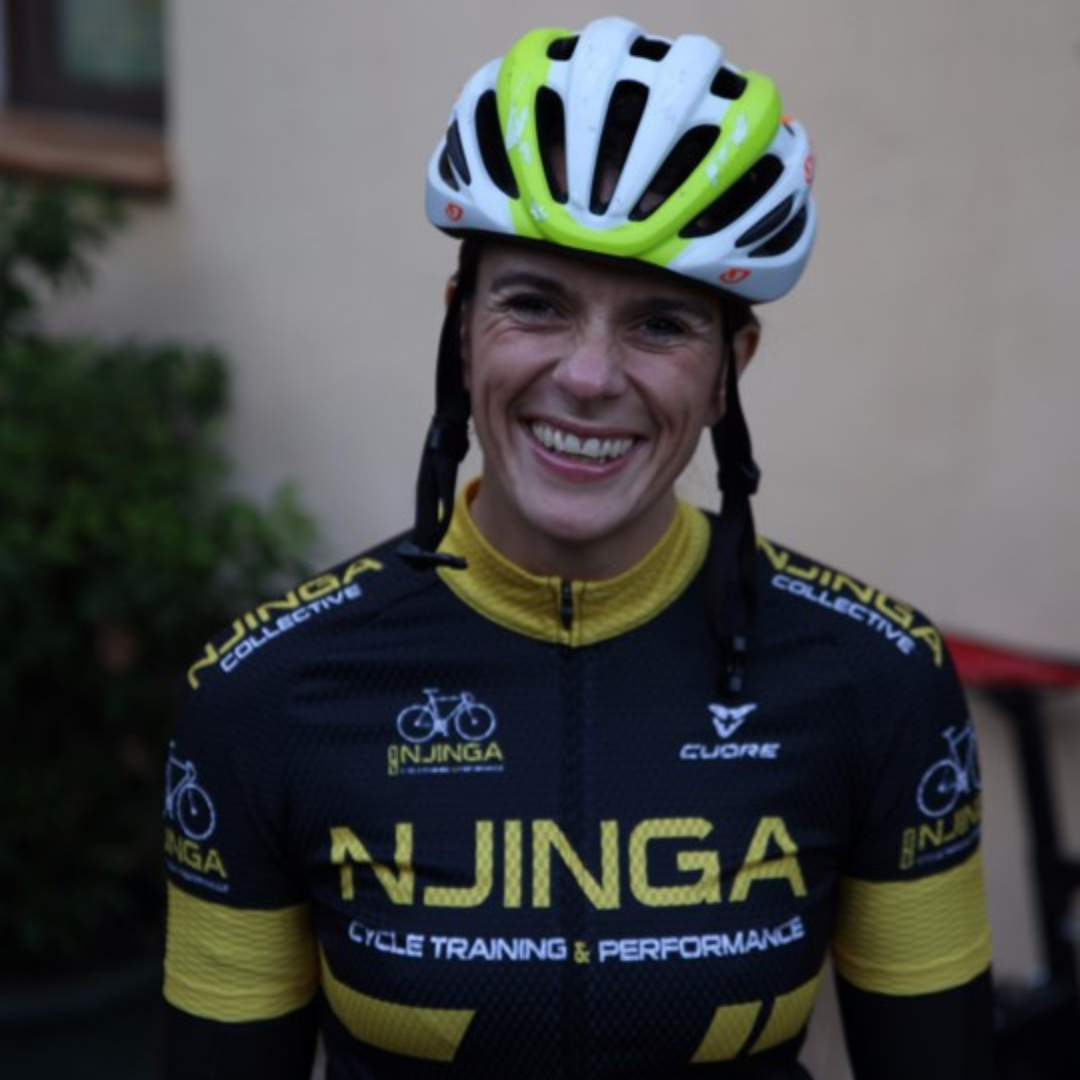 Kat on the Njinga end of season trip to Mallorca.

A viral chest infection, rebuilding my fitness and my first sportive

2018 started off with a bang and a trip to Portugal. There was some serious elevation gain across the entire trip, including my climb of Monchique via Foia where the total elevation was 2003m, my biggest ever hill climbing day!

After this trip, my momentum came crashing down: I got a serious viral chest infection and was forced to take 4 weeks off training. For someone who's used to running around and always being active, not doing any exercise for a month was tough.

When I did start training again, I really had to take it slow.

The indoor training sessions were brilliant at supporting my return to fitness: you can ride the sessions at a pace that suits you.

To give myself a goal to aim for, I signed up for my first proper sportive ride: the SWRC May Flyer (the shorter route of 90km) which I completed in 3h49m.

In March 2019, we flew out to Cyprus for the UCI Gran Fondo. Though I had no intention of competing seriously, I wanted the challenge of riding a UCI course and seeing what I was capable of.

Those two days of cycling was the hardest mental and physical challenge I've ever had to face. And to make it worse, the weather conditions were rubbish: wind and rain galore! 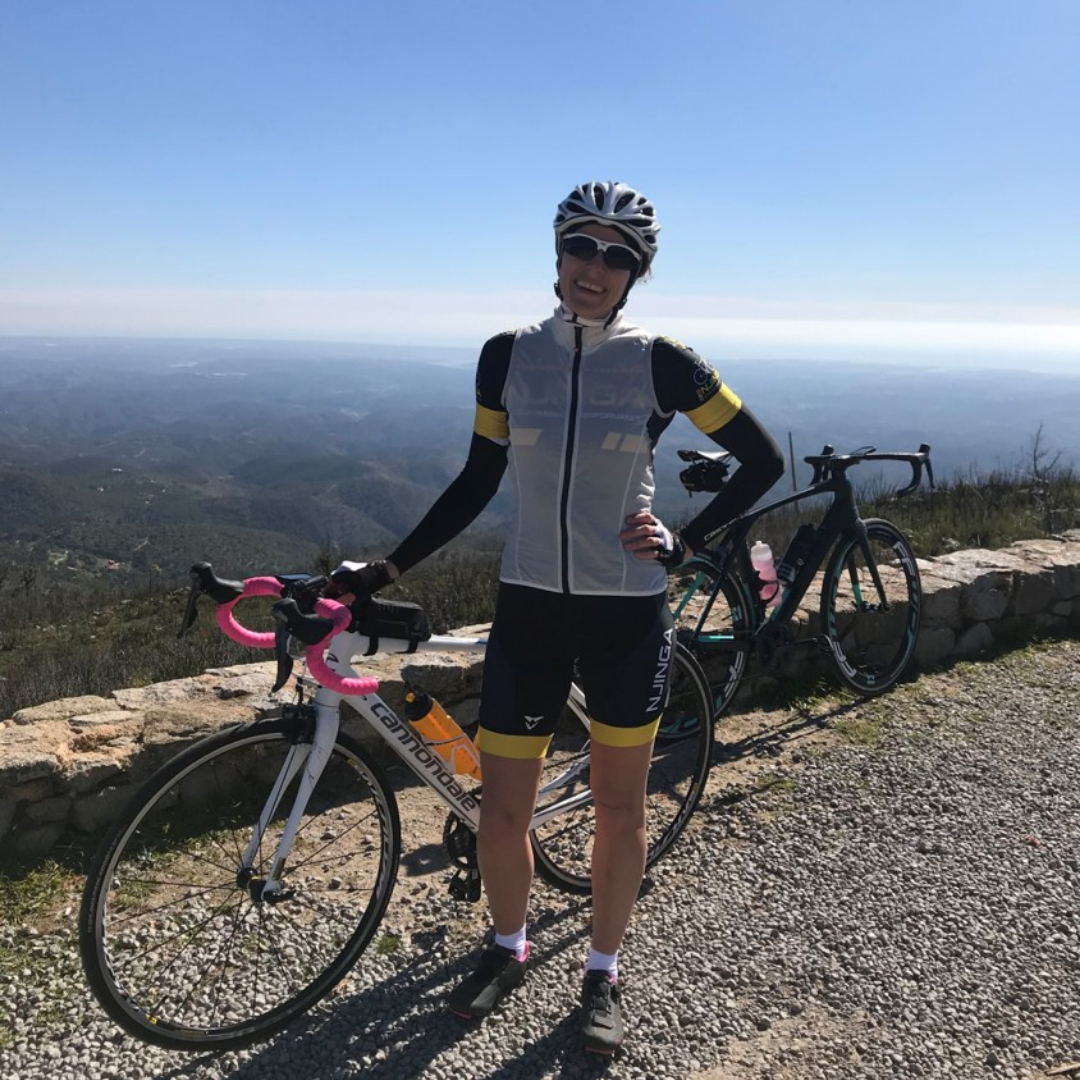 Njinga in Portugal after conquering the Monchique climb. 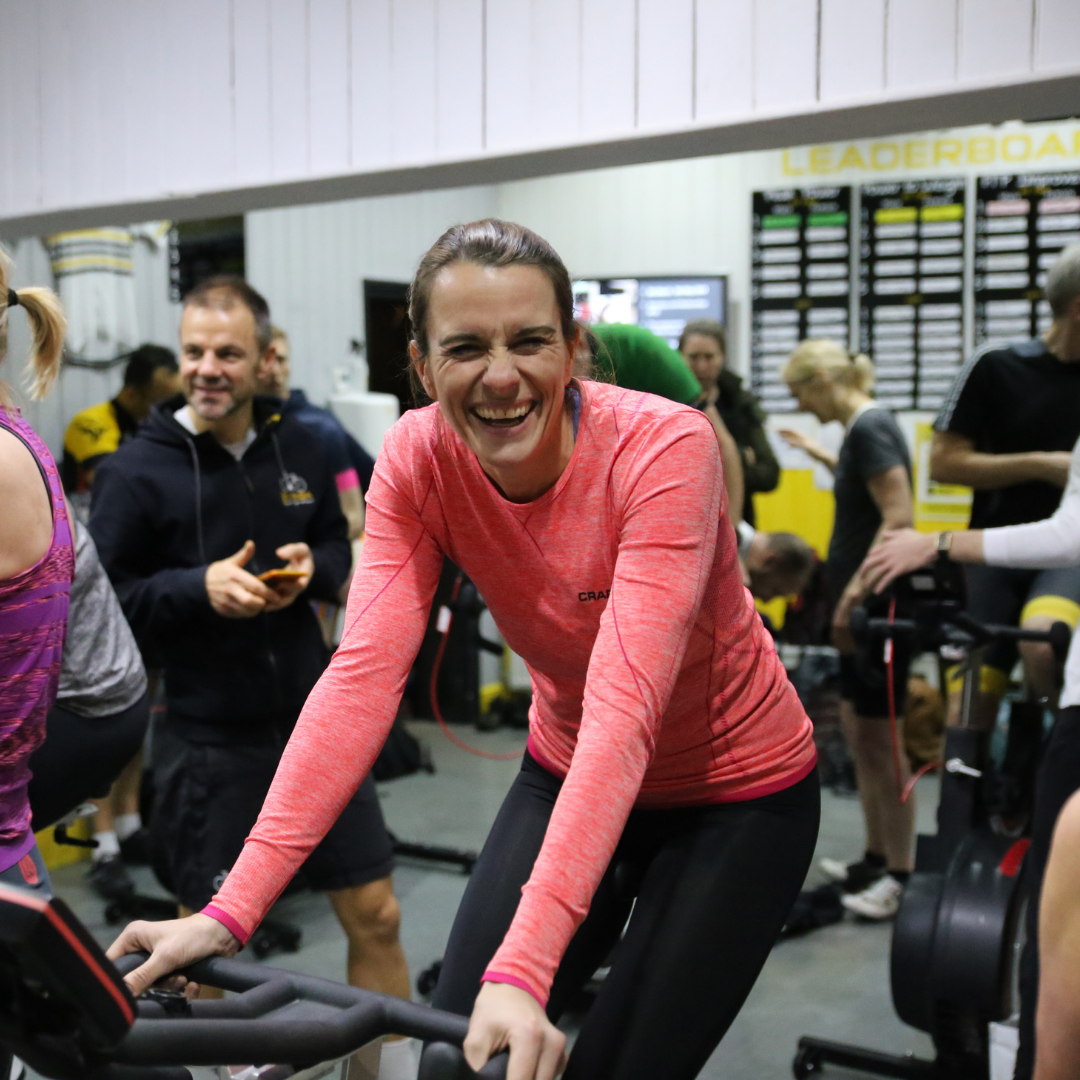 Kat cycling in the Njinga Lab as part of our Team Challenge evening.

Day 3 was shorter with a distance of 53km but still 1,471m of climbing. I spent much of the ride on my own due to my legs being so tired from the day before. The hardest part was battling my own voice in my head when I felt like giving up.

What got me through to the finish line – and with a time of 3h12m – was what Njinga taught me about riding through the pain and not giving up.

Njinga gave me more than cycling: it introduced me to my other half & now we're expecting

My 2020 bucket list included competing in the Cape Rouleur and Cape Argus in South Africa. However, the universe had other plans: I'm now expecting a little one with my other half, Tony (who I met through Njinga) in February 2020. So South Africa will have to wait for now, but as soon as I can, I'll be back on the bike and conquering the local surrey hills, using Njinga indoor training sessions to rebuild my cardio bike fitness. I can't wait.