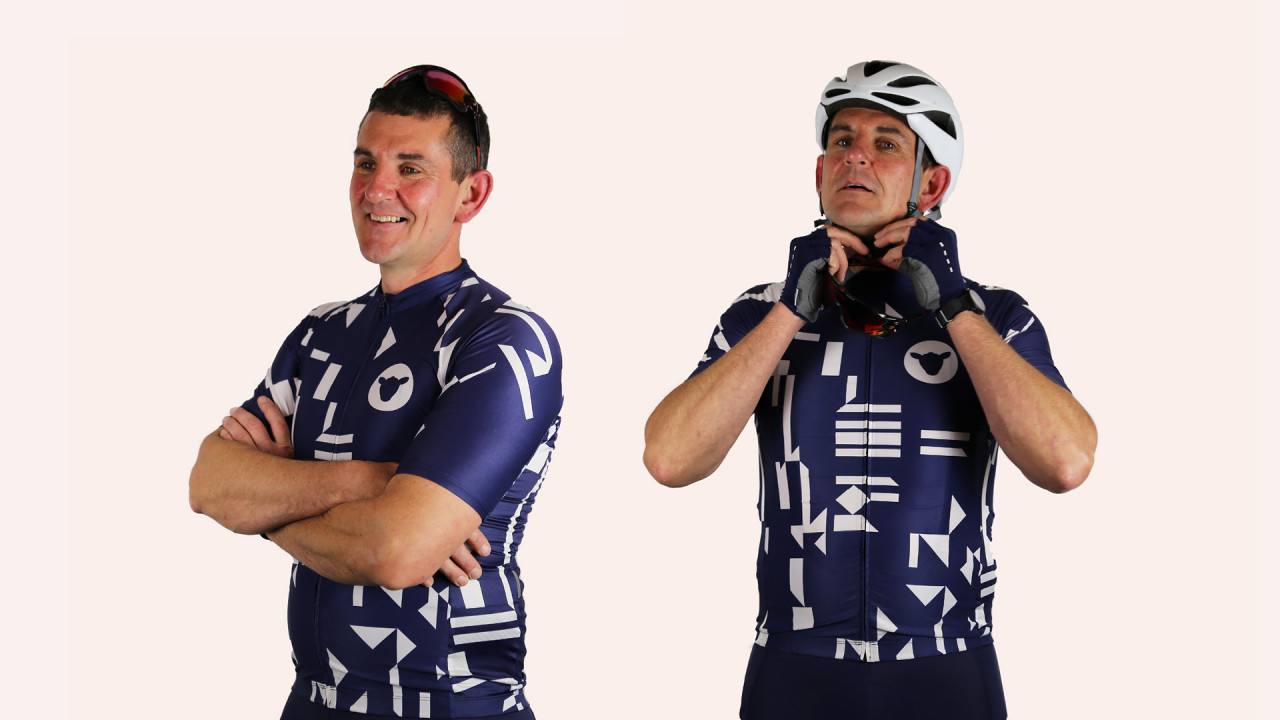 From an overweight ex-rugby player to a cycling hero, Tony’s story is an inspiration to all.

Qualified for Group 1 in the Rouleur (a four-day stage race).

Started his journey at Njinga at 108kg and has now lost over 31kg.

"Over eight weeks, I built my strength and stamina and added over 20 watts to the FTP score and achieved a 3.6 power-to-weight ratio."

Before Njinga: an overweight ex-rugby player

At the end of 2013, I weighed 108kg (or 17 stone). Having been a regular rugby player for years, I'd kept the rugby drinking lifestyle but without the exercise to counter it. I realised that, for all obvious reasons, I needed to bring exercise back into my life.

In 2014, I decided to buy myself a road bike and turbo trainer, and started off doing gentle exercises indoors. Soon after, I began cycling with friends and took on my first-ever sportive in 2014, the 16 Bridges (34 miles) which took me ±4 hours to complete.

Following several other local sportives, my friend Louise suggested I join her in Mallorca for the 312. Mallorca is a hilly place and it was going to be a big challenge for me, a now-95kg man. This was the moment that really kickstarted my training: I wanted to be ready for this ride. I joined the David Lloyd club and started exercising 3 times per week.

"Njinga's philosophy of Train Smart, Fuel Smart, Think Smart = Ride Smart is spot on. You get what you put in, and the Njinga crew are always there to push you. So, too, does the supportive Njinga community of riders who encourage each other no matter their level of ability."

When I discovered Njinga, I immediately signed up to their indoor training sessions and not-for-profit outdoor riding group, the Njinga Collective.

From the training sessions, I was able to focus on my cycling development, training, and performance. From the Collective, I gained early inspiration riding with fantastic cyclists who were much quicker and stronger than me. 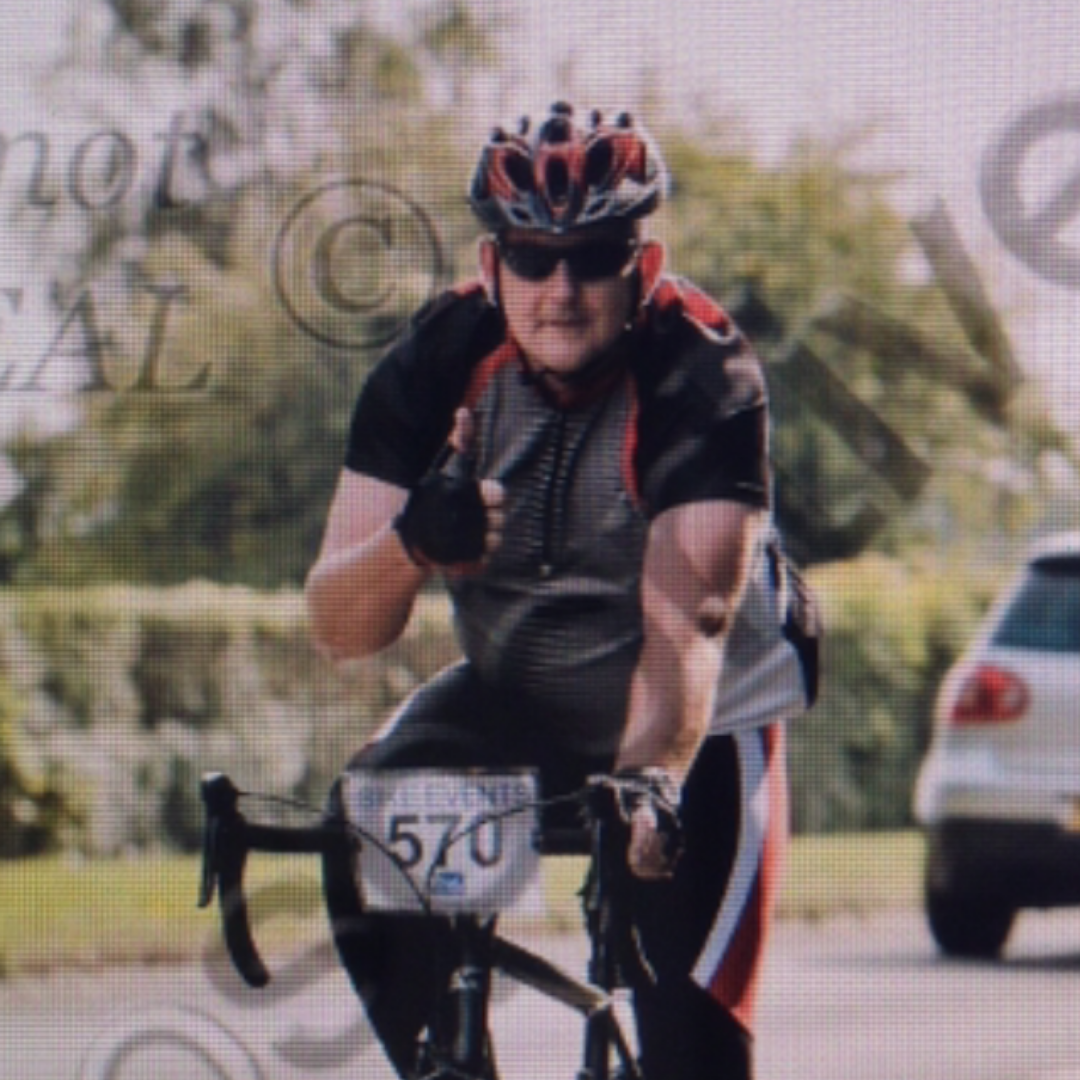 Tony completing his first sportive...Weighting in at over 100kg. 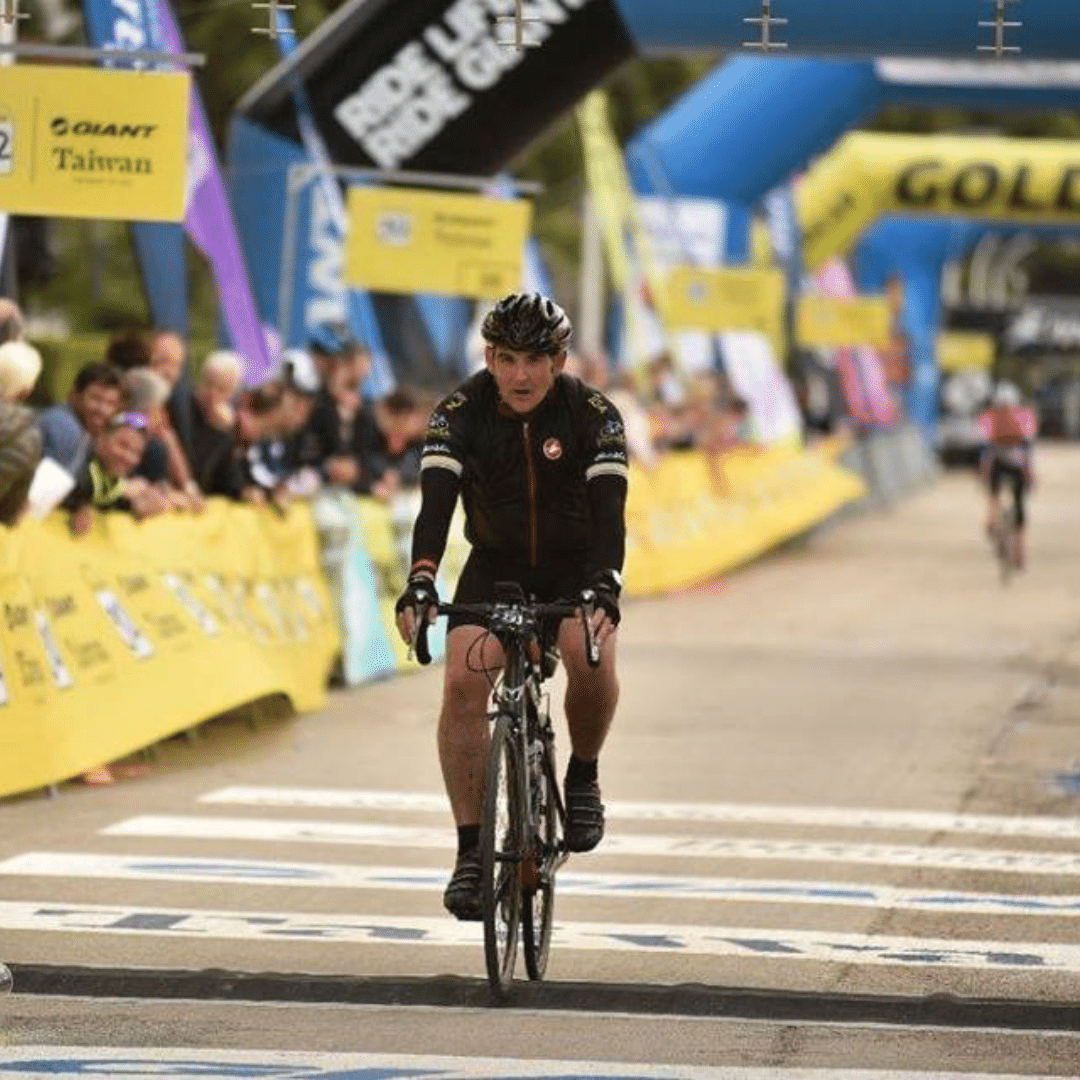 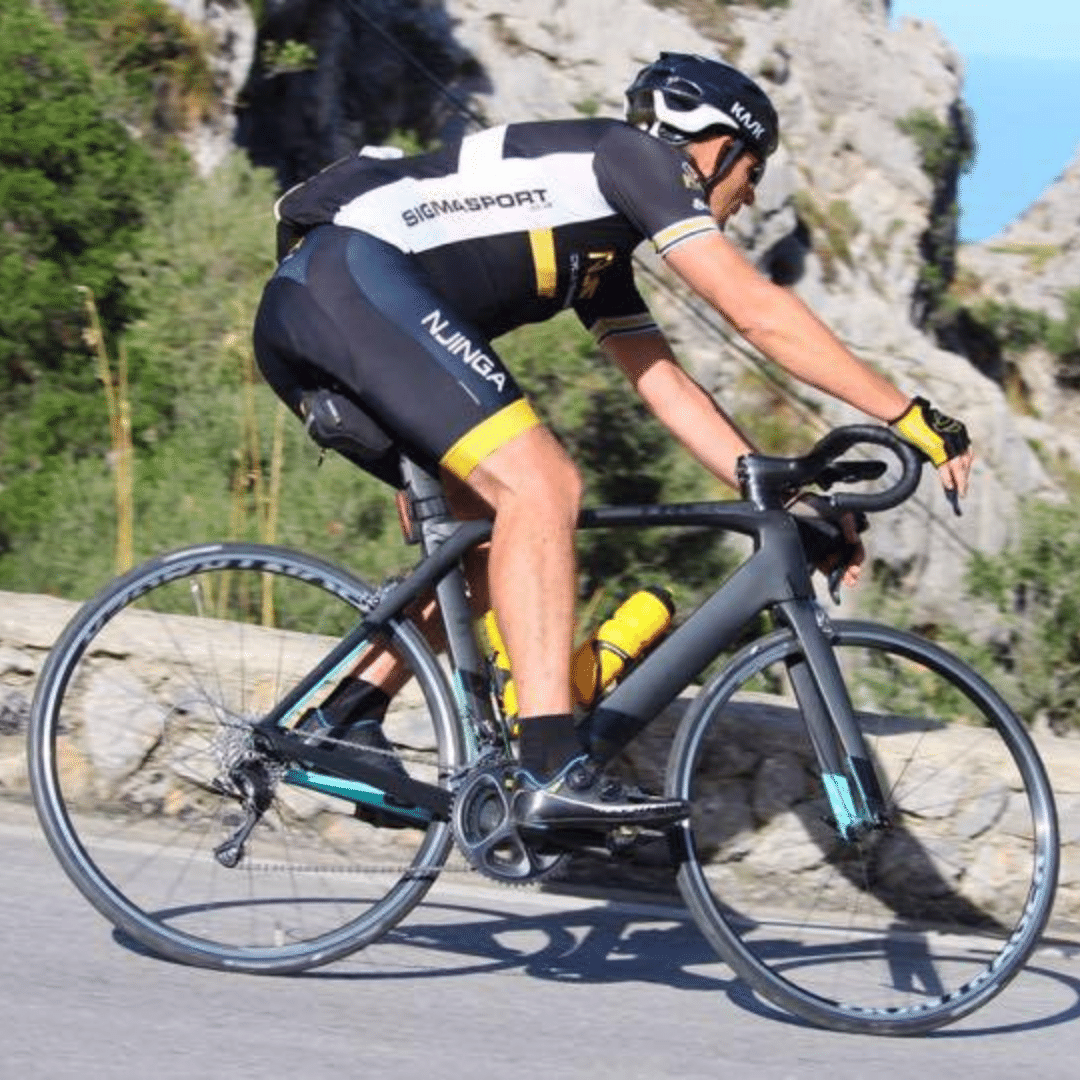 Tony on an Njinga Training camp in Mallorca.

The Mallorca 312 and summer training

In April 2016, I took on the Mallorca 312 and completed the 232km route in 9 hours 17 minutes: a major turnaround from my first sportive two years prior.

I continued to ride regularly through summer 2016, doing two classes a week, and riding with the Njinga Collective every weekend. I took on 10 other major sportives in that year including Ride London, Tour of Cambridge, Wales Velo, and Rise Above. By the end of 2016, my weight had dropped to 89 kilos, I was feeling much fitter and healthier, and, in turn, more comfortable on the bike. Even though I always found myself at the back of the peloton on the climbs, I pushed hard, kept going, and never gave up.

A knee injury, recovery, and then training for the Cape Rouleur

I suffered a bad knee injury in October 2016 but I remained determined: this would not affect my cycling. As advised by my physio, I kept my head down and rested for three months. It was hard but more than anything, I wanted to achieve my next goal of cycling the March 2017 Cape Rouleur.

When I got back to my training at the start of 2017, some fellow cyclists doubted I had enough time to get to the level of fitness I needed for the Rouleur.
But with the help of Togo, Josh, and the Njinga team, I worked hard at my pedal technique, focused on the Mountain Goat classes.
And, in March, flew to South Africa with high hopes of being able to get seeded into group 2.
With grit & determination, I achieved a seeding into group 1 which was above & beyond my expectations.
This result allowed me to compete alongside my fellow Njinga rider, a good friend, and someone I aspired to – Tim Richards.

By this time, my weight had dropped to 86kg.

In the summer of 2017, I was delighted to be asked to be an Njinga Ride Captain. It was a great way to give back to Njinga and help other cyclists in the same way others had helped, supported, and encouraged me.
A learning curve: the UCI Gran Fondo World Championship qualifier
I ramped up my goals that same year by entering the UCI Gran Fondo World Championship qualifier at the Tour of Cambridge. This was a huge learning curve for me: I underestimated the pace and power of the riders and I narrowly missed qualifying by 50 seconds. I was gutted. It really shook my confidence and belief as I tried to analyse where I'd gone wrong.
Togo was a great support at this time: he chatted through what had happened, where I could improve, and helped me put a plan together.
This enabled me to train smart and focus on the quality of my training as opposed to the quantity.

By this time, my weight was 82kg.
My dedication to Riding Smart

Then began my dedication to the Njinga philosophy: Train Smart + Fuel Smart + Think Smart = Ride Smart.
I watched my diet; incorporated strength and conditioning classes into my routine; and continued with the variety of Njinga indoor training sessions (supplemented, of course, by the longer weekend Collective rides).

My weight continued to drop. By this time, I was 77kg.

It was a rewarding and appreciated finish to the year and fuelled my hunger to compete. 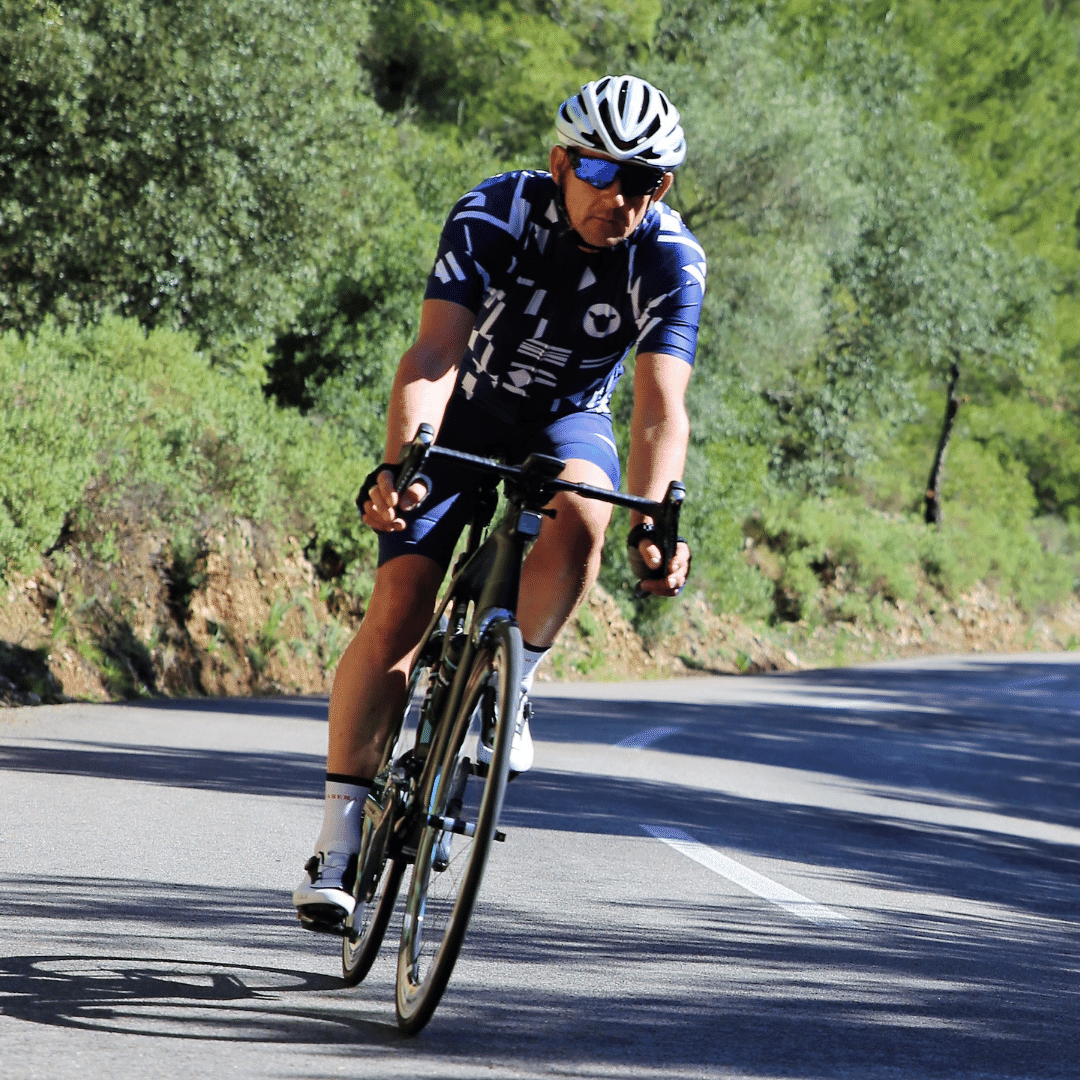 Tony cycling on an Njinga Training camp in Mallorca. 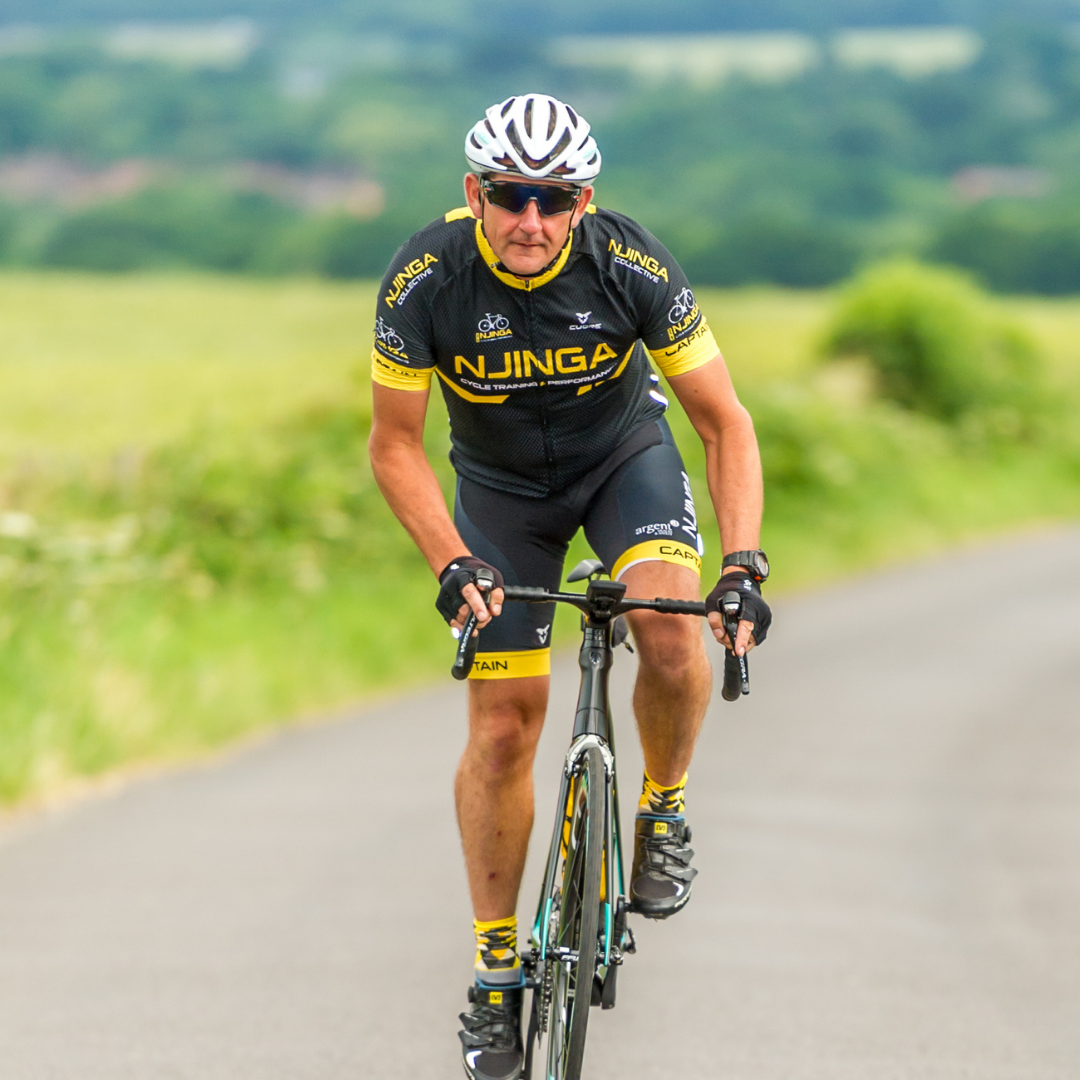 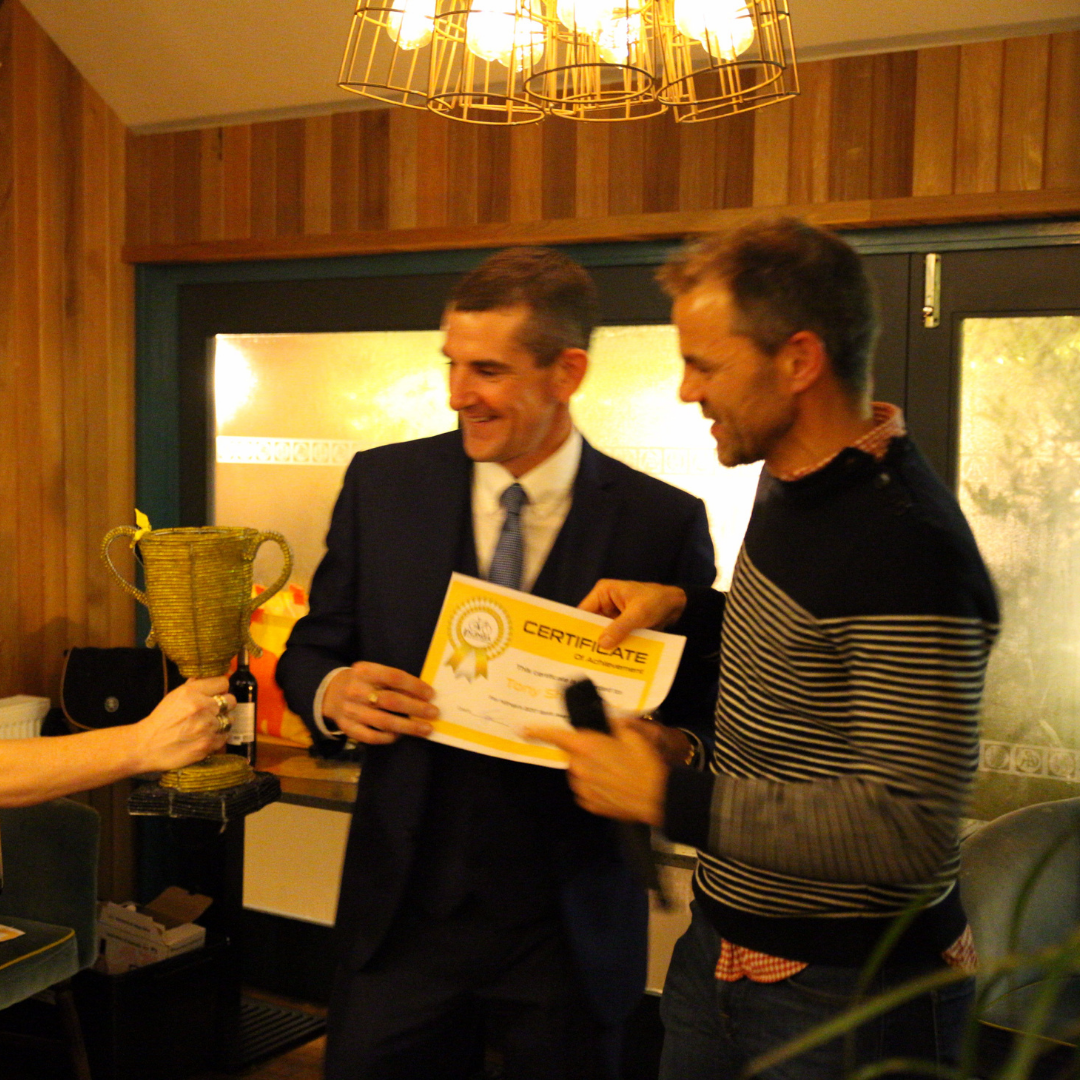 Tony was awarded our 2017 Njinga Rider of the Year award.

Qualifying for the UCI World Championship 2.0

I knew already that my 2018 goal would be – unsurprisingly – qualifying for the UCI Gran Fondo World Series. I mapped out my cycle training plan for the year which included several overseas training trips: Tenerife, Portugal, and an Njinga training camp to Mallorca.

Before my 2017 year was up, I made a last-minute decision to go to Dubai for a qualifying event. The racing was quick, flat, and hot, and I clocked up an impressive 27.24mph average over 100km. But, due to an incident at the event, all announcements were delayed until March 2018 so, instead of waiting for unknown results, I forged forward and focused on another qualifying event, this time in Cyprus.

Regardless of the Dubai results, I wanted to know I could achieve qualification on a hilly course and demonstrate my all-round ability as a rider.

And on March 24th, I just did that, finishing 12th in my age category for that day and 11th overall which gave me the qualification I'd been striving for.

At the time of writing this, I'll be heading to Varese this September for the UCI World Series final. 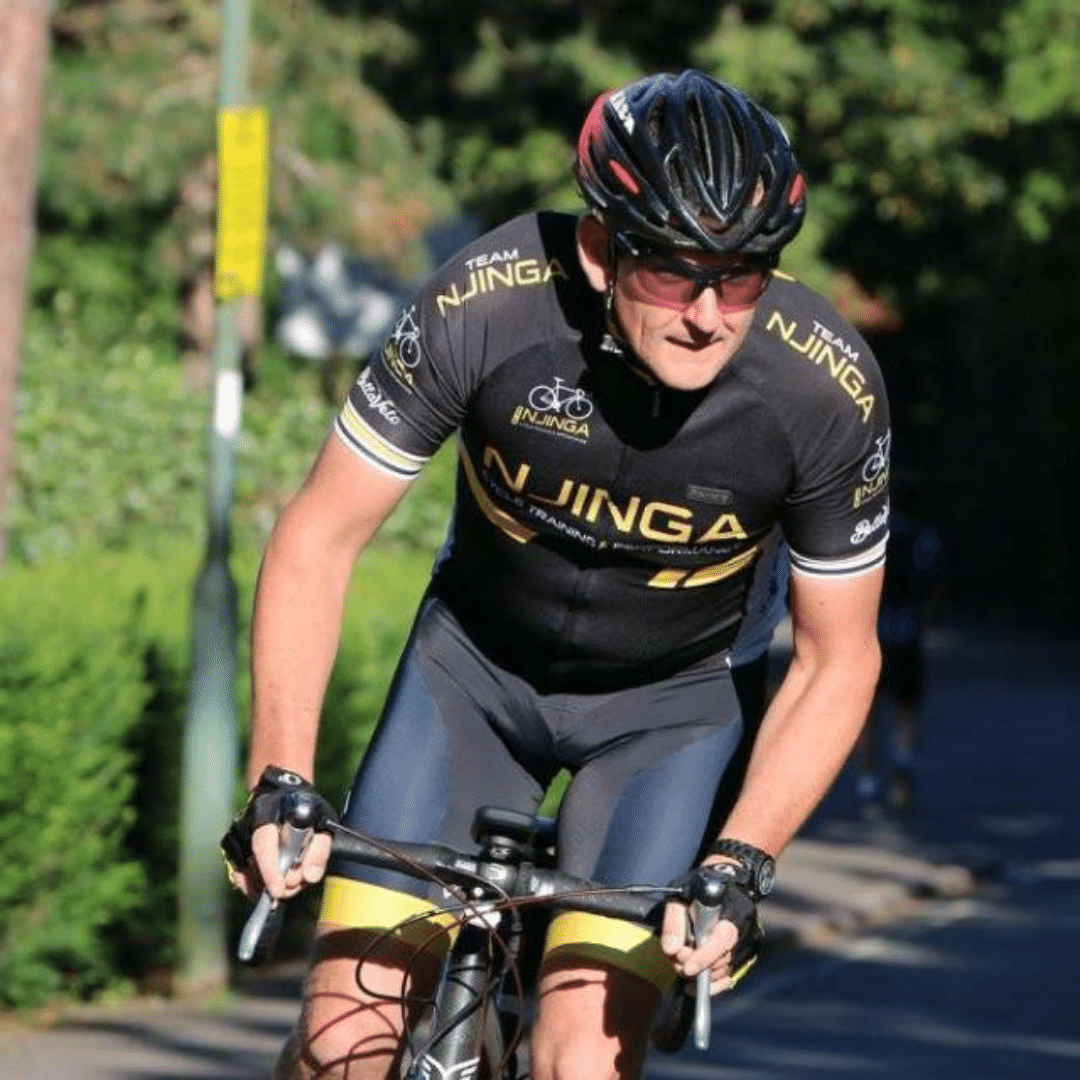 Tony training hard to earn his qualification for the UCI World Series final. 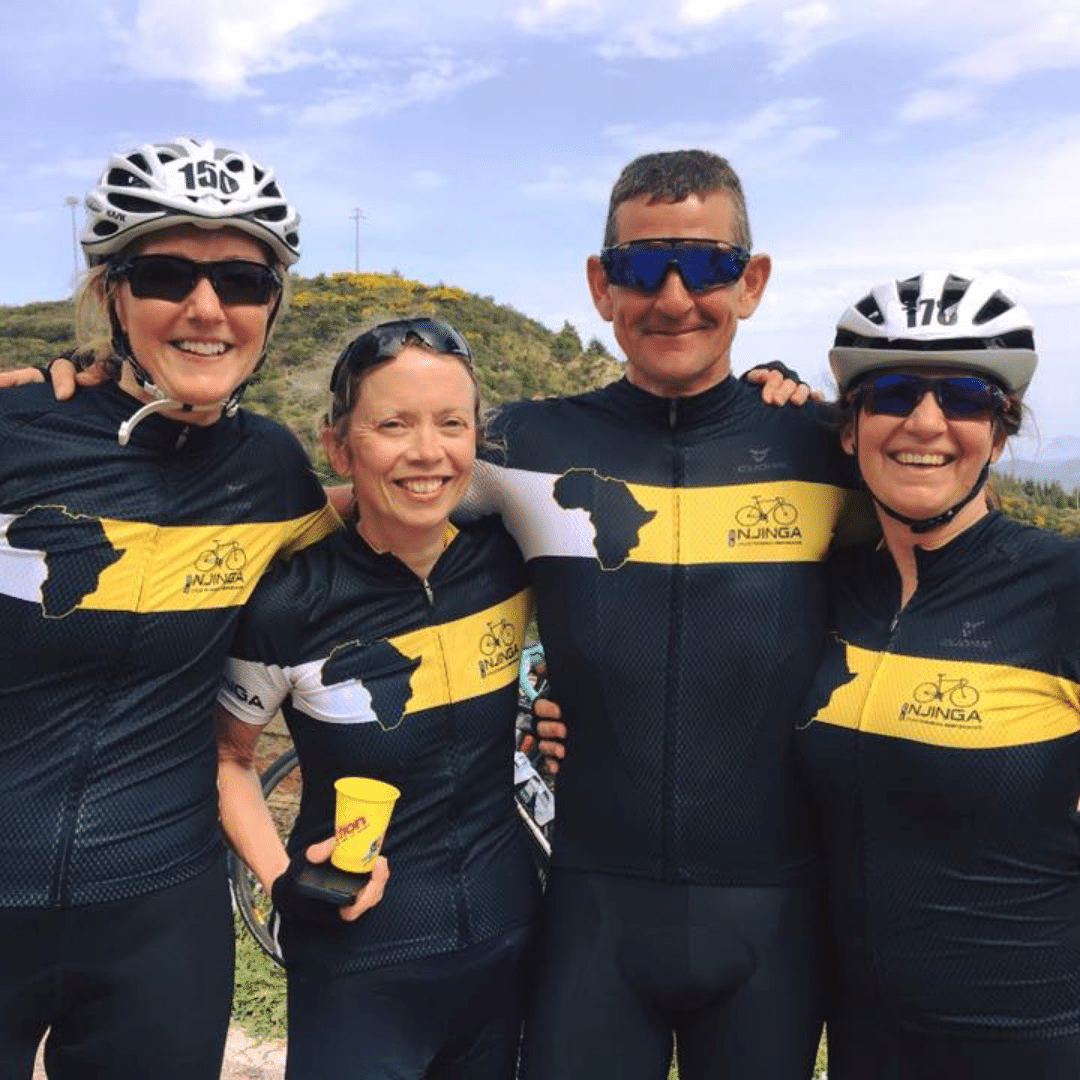 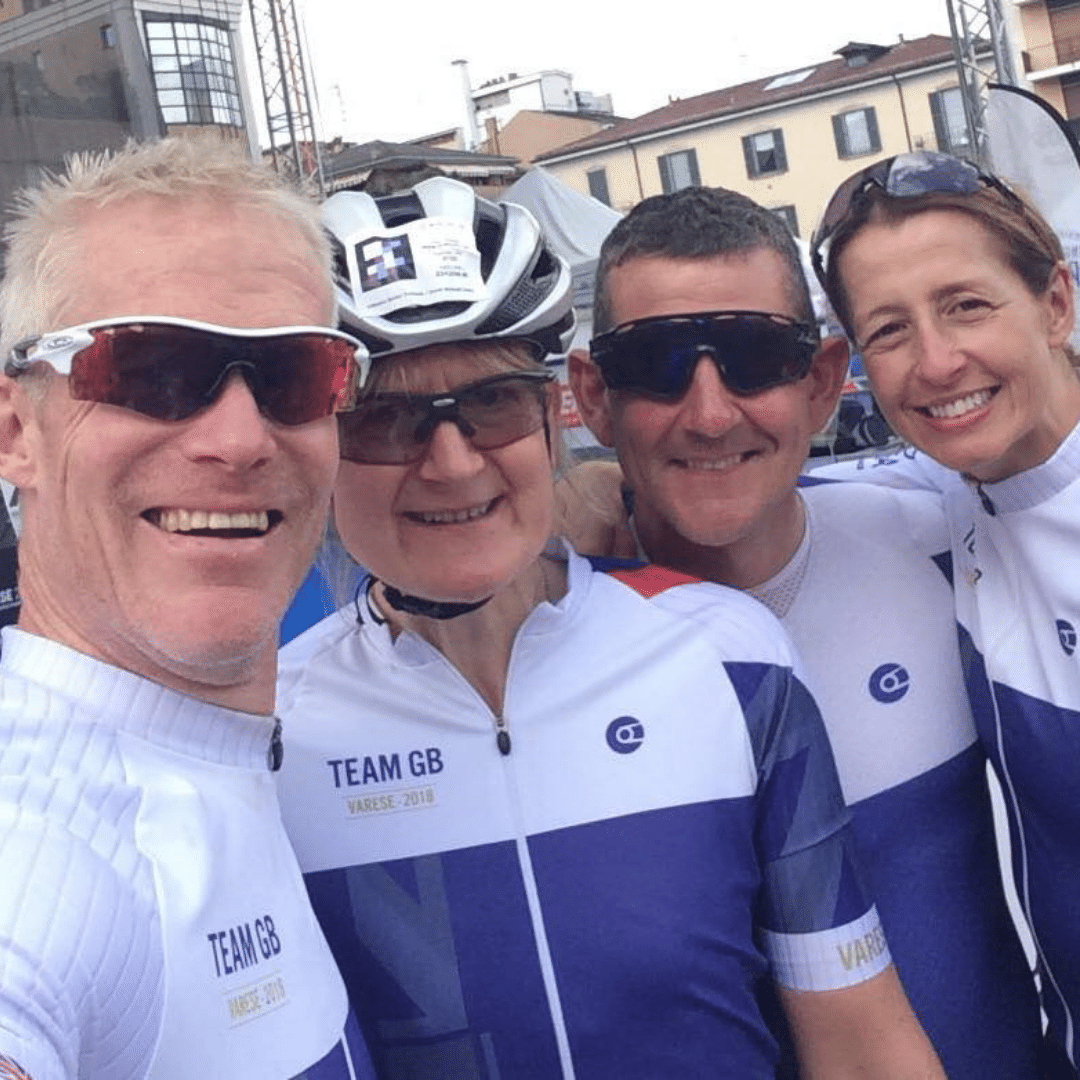 Tony with fellow Njinga riders in Varese for the UCI World Series final.

Why do I keep going to Njinga?

Njinga's philosophy of Train Smart, Fuel Smart, Think Smart = Ride Smart is spot on. You get what you put in, and the Njinga crew are always there to push you. So, too, does the supportive Njinga community of riders who encourage each other no matter their level of ability.

I'd recommend Njinga to any riders – for general training to all-round fitness improvements.

As a cyclist of any ability, they can improve your cycling & pedal technique or, if you're specifically wanting to train for an event, they have dedicated training & online programmes.

Plus, it's a great way to connect with like-minded people, have fun, and socialise.

It's really important for me to put back into Njinga after all they've given me over the last few years and so, I'm incredibly proud to have been asked to be an Njinga Ambassador.

Quote.
WHERE IS TONY NOW?