From nothing to novice to sportives to six-dayers in two years. And that's just the start.

In July 2017 in 6h17m, only two years after getting first-ever road bike

Since joining Njinga I've lost over four kilograms in weight which has made a massive difference to my power-to-weight ratio.

Before Njinga: my first road bike and first 50 miles

A couple of years ago, rather randomly and extremely cluelessly, I bought a road bike and started tentatively on my current cycling journey. I was inspired by a colleague talking about cycling to work in the summer and I wanted to find something other than the gym to improve my fitness.

Six months later, I rode my first 50 miles, still in trainers and without any of my own nutrition. My friend kindly supplied the snacks and it all turned out better than I expected, so much so that I was talked into taking up a charity place for Ride London 100. I continued to workout at the gym, supplemented by cycling to work every so often and a few weekend rides. But I didn't really think too hard about how I was actually going to get around 100 miles and up the Surrey Hills.

That's the thing about Njinga: When things go wrong – and they do – The kindness and encouragement from the team is so fantastic that I've never lost my confidence.

Enter Njinga: Preparing for Ride London 100 with an eight-week programme

The turning point came when another friend suggested I attend one of Togo's talks about preparing for the event. It was actually aimed at intermediate to advanced riders so I found all the talk of gold standard times, training techniques, data, and equipment extremely intimidating! My initial impression was that Njinga was for advanced riders only, but when I saw Togo was doing another talk for beginners, I tried again. 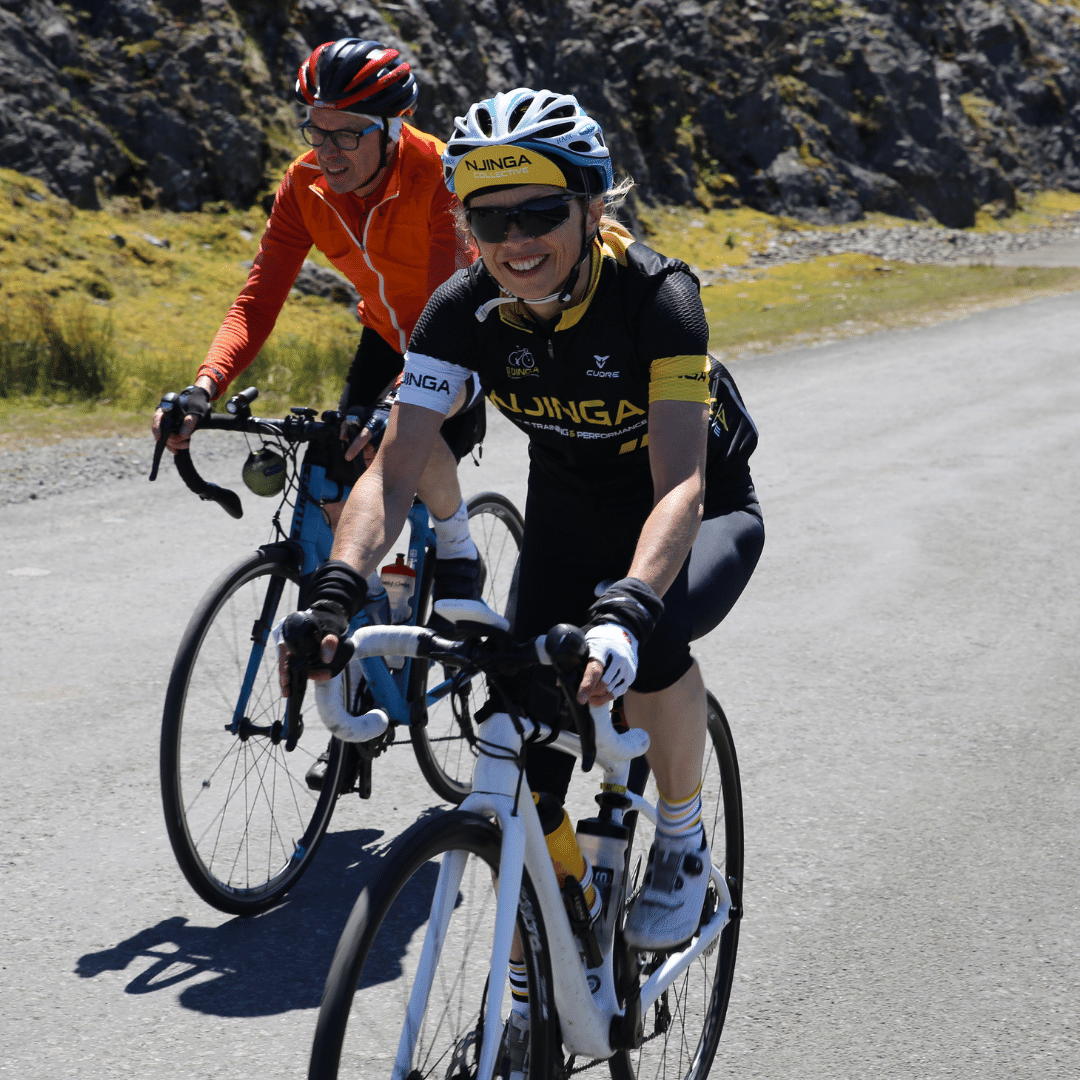 Mary on an Njinga Training Camp in Wales. 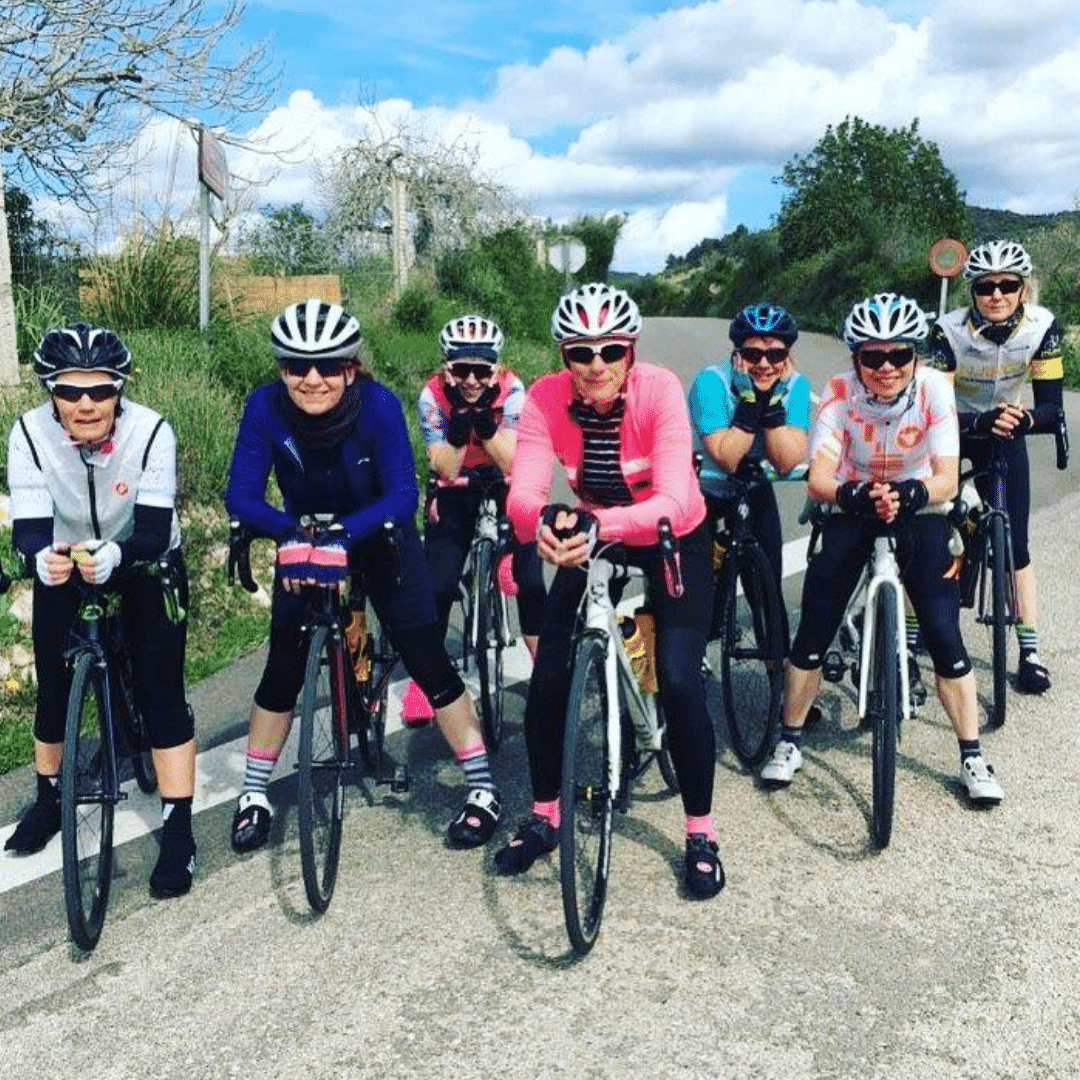 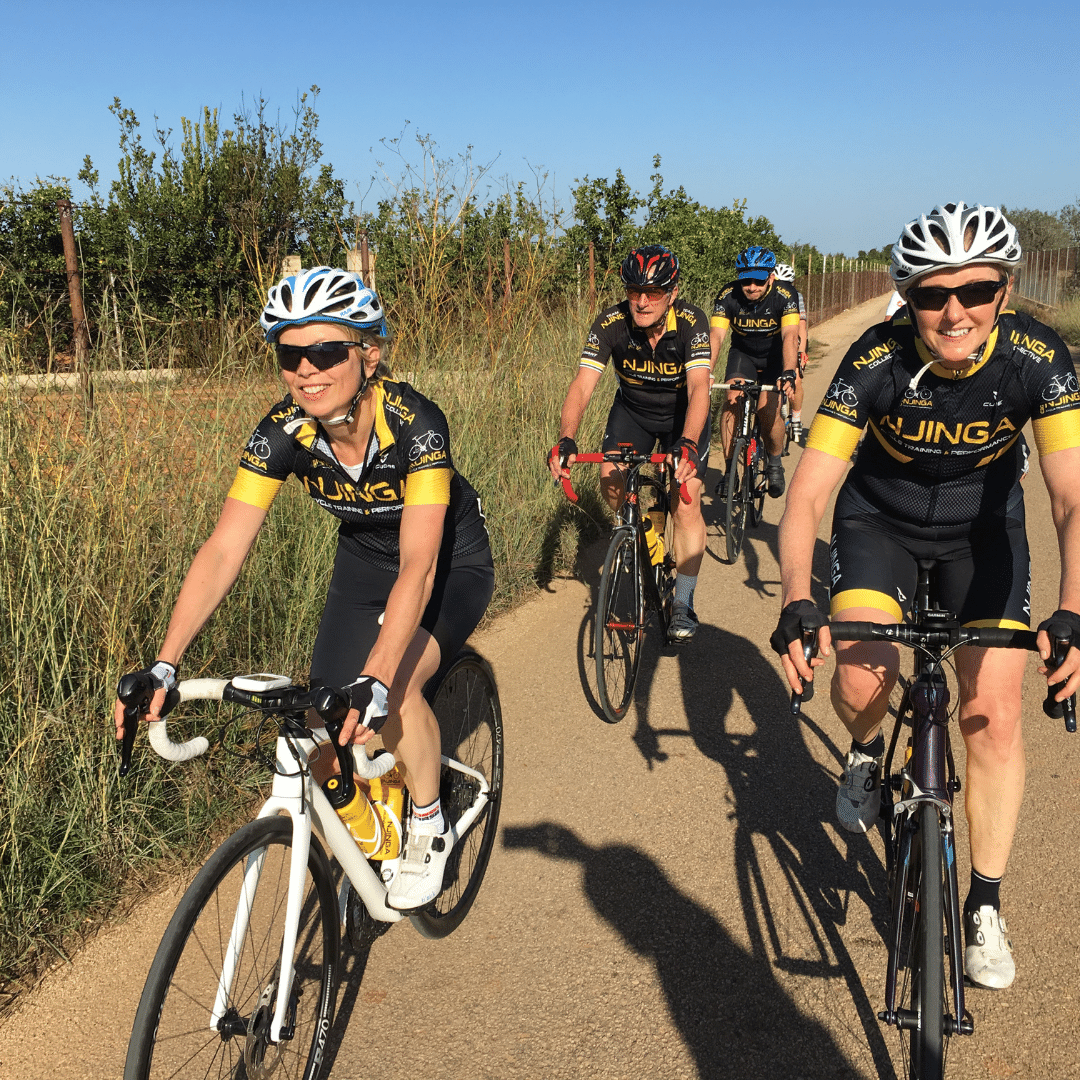 Mary on an Njinga Training camp to Mallorca.

And after a reassuring chat with Leigh, I signed up for Njinga's eight-week Ride London group indoor training programme, and I haven't looked back!

What I really liked about the indoor training sessions was riding to my numbers in a structured way to achieve an objective.

Although starting from a pretty low level, and firmly rooted to the bottom of the leaderboard, the support and encouragement from Togo, Josh, and all the riders in the programme was fantastic, and I was hooked.

Eight weeks later, I successfully completed the 92-mile version of Ride London. Incidents on the road meant that Leith Hill was off-limits, but, nevertheless, it was the farthest I'd ridden, and soon afterwards I was back on the wattbike, keen to at least maintain my new levels of fitness.

If I hadn't joined the eight week programme, I honestly doubt whether I'd have made it around Ride London within the time limit.

Since then, I've been a wattbike class and group programme regular and I've lost over four kilograms in weight which wasn't planned at all but has made a massive difference to my power-to-weight ratio.

One of the other unexpected benefits has been an improvement in my flexibility thanks to the post-ride stretches and yoga classes. I've always enjoyed yoga, but Sam's positivity, warmth, and focus on the key areas for cyclists is great.

Outdoor riding with the Njinga Collective

The other great aspect of Njinga is the outdoor cycling. The Njinga Collective is their not-for-profit outdoor cycling club and in 2016, they introduced the Mbidzi group for newer riders.

However, after a couple of Mbidzi rides, I realised that with my new fitness levels, I'd already outgrown them! I went on to join the Njati (meaning buffalo) group for my first full Collective ride. It was tough, but the ride captains and all the riders were incredibly supportive and never let me feel that I was holding them back which was great for my confidence.

I've done a few more rides with Njati and I can't speak highly enough of the captains for their helpfulness, handy tips, and support.

It really does make me feel part of an incredible cycling community.

The cherry on top: the Academy basic skills programmes

The final aspect of Njinga that has been pushed me as a cyclist has been the Academy (yup, the Njinga Cycling Academy before it became their main brand!). The level one programme takes you through the basic cycling skills and builds on them. The advice on gear selection has made such a difference, particularly to my climbing, and I've become much more confident riding in a group.

I'm midway through the level two programme, my pedalling is held up by Togo as a paragon of smoothness and my Strava times are coming down. 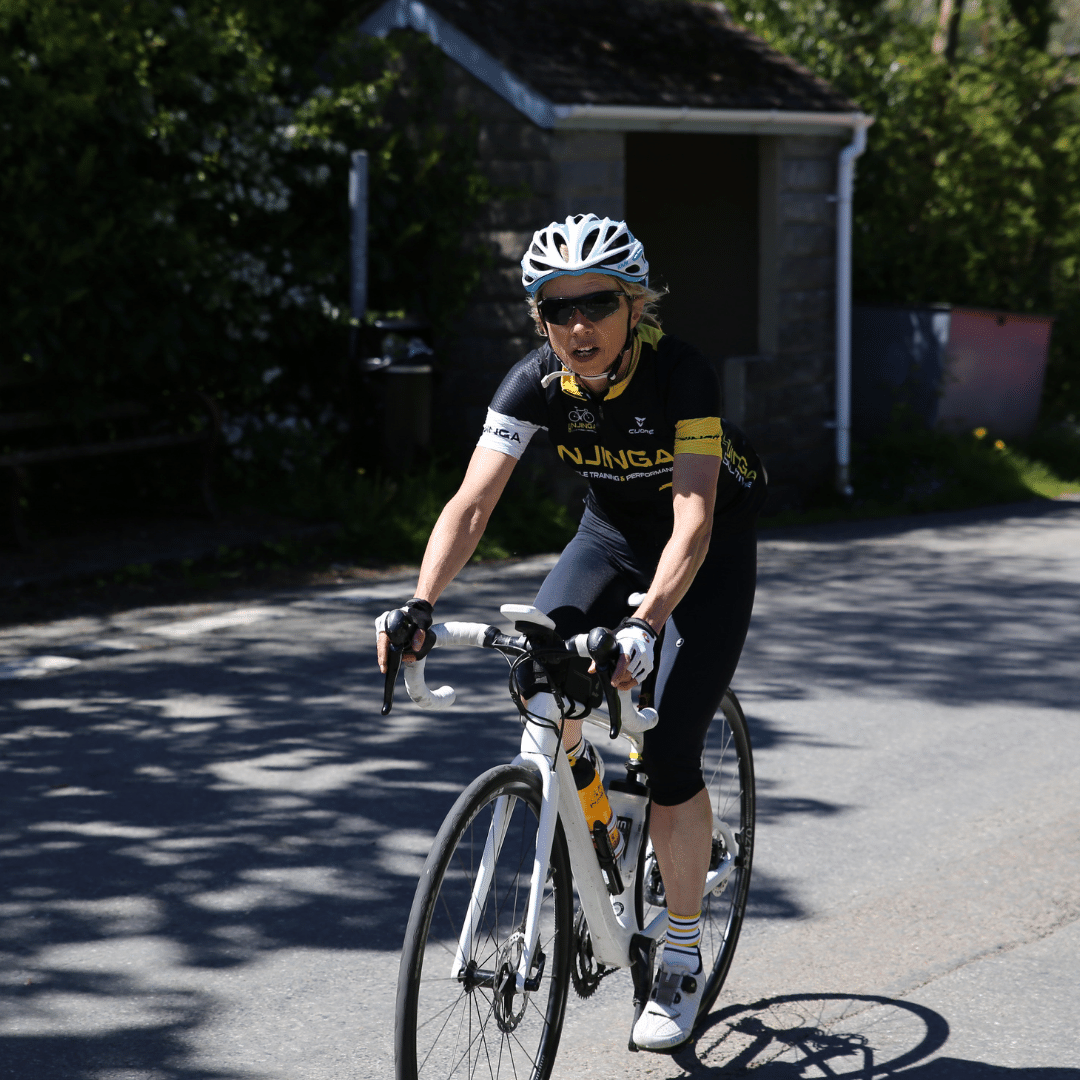 Mary during a Njinga training camp in Wales. 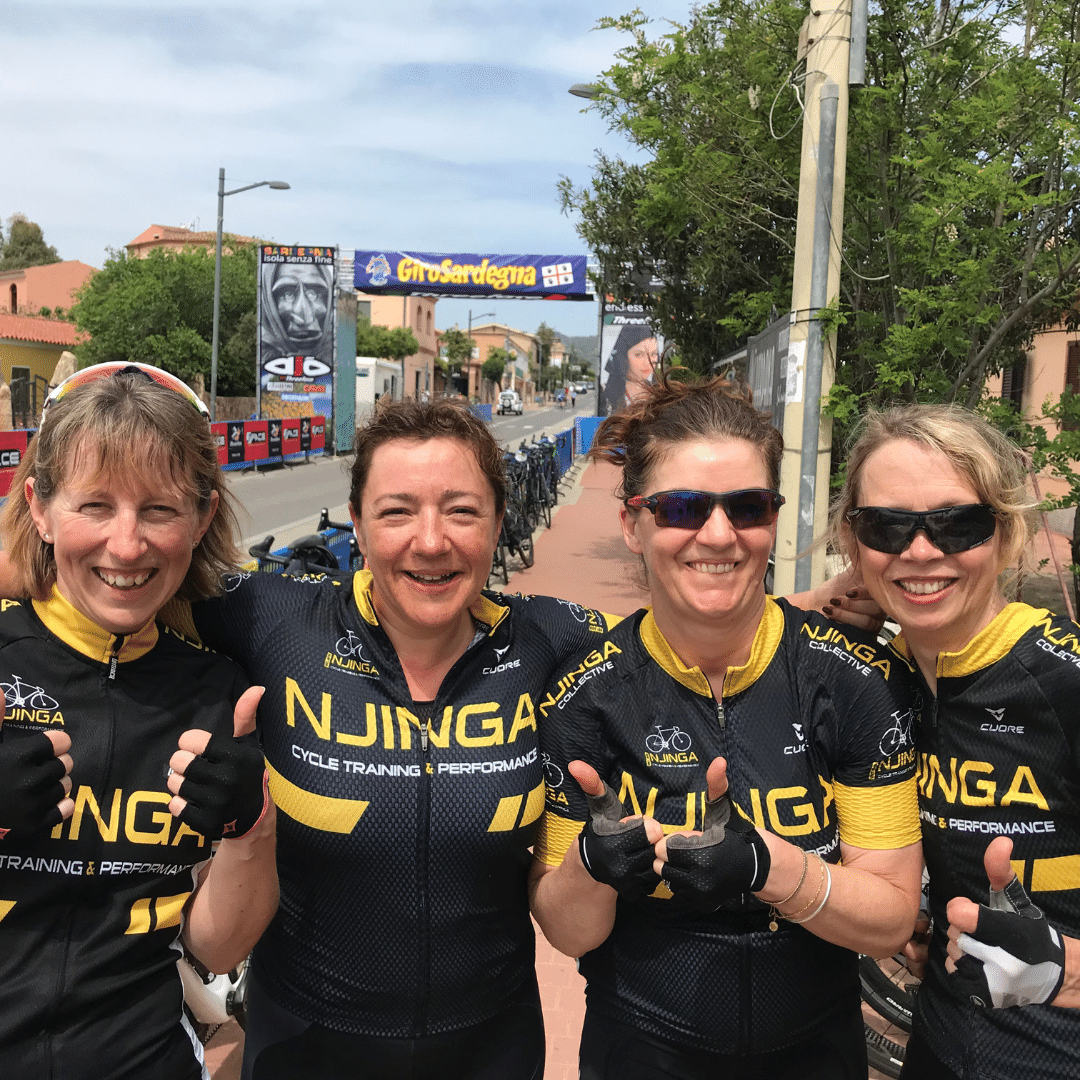 Mary during a 6 day stage race in Sardinia. 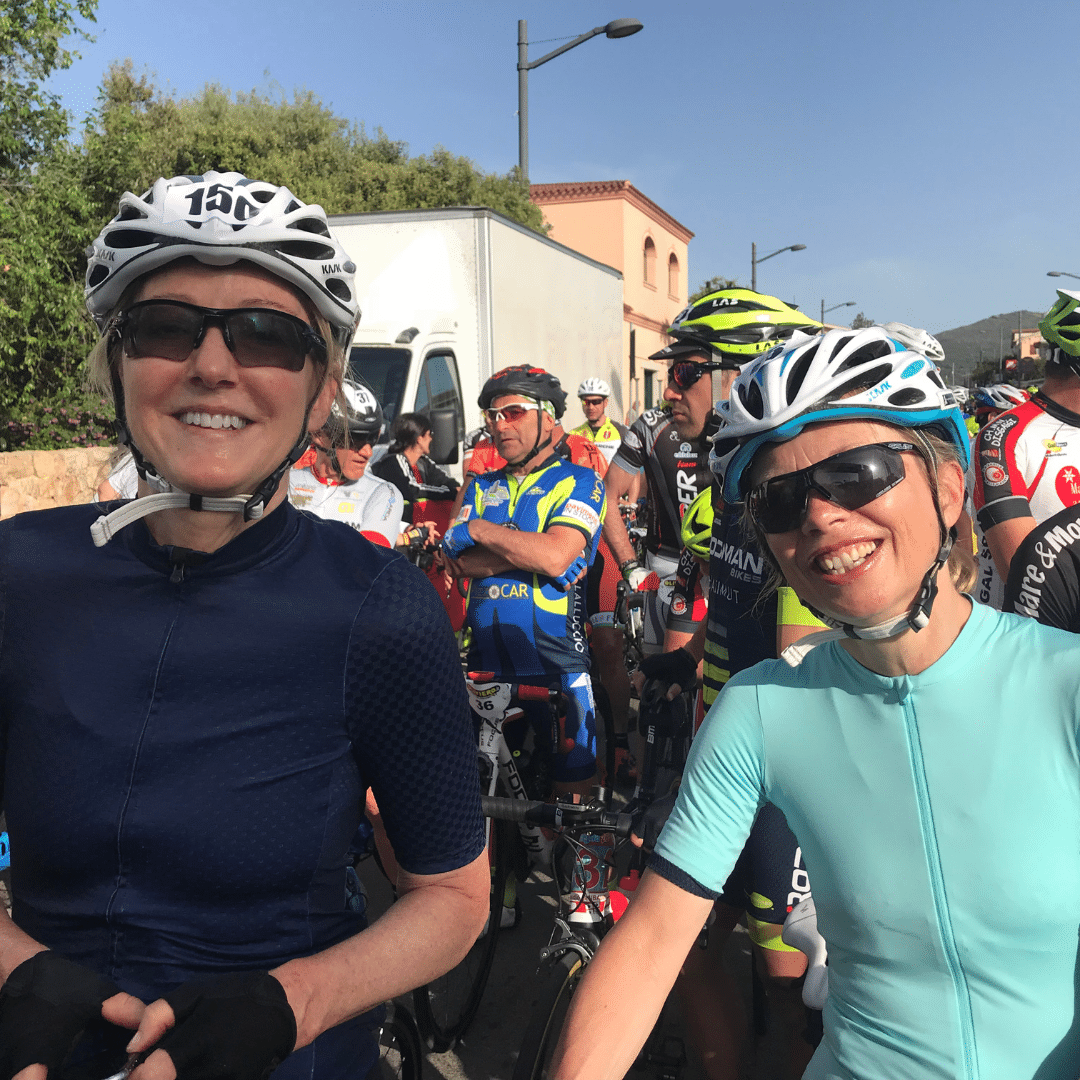 Mary during a 6 day stage race in Sardinia.

I'm sure the shiny new bike has helped but the main credit to massive pedal strokes forward, particularly outdoors, is due to the Njinga team.

Ride London 2.0 & the shining support of the Njinga community

I recently completed Ride London again – this time the full 100! – but due to sustaining three punctures, my times were not what I'd hoped for. But when I reported back to the Njinga team and my fellow riders, they helped me see the positives in what had happened by highlighting my determination to keep going in the face of adversity.

That's the thing about Njinga: when things go wrong – and they do, from ride incidents to blowing up during an FTP test, or just generally a bad day! –

The kindness and encouragement from the team is so fantastic that I've never lost my confidence. 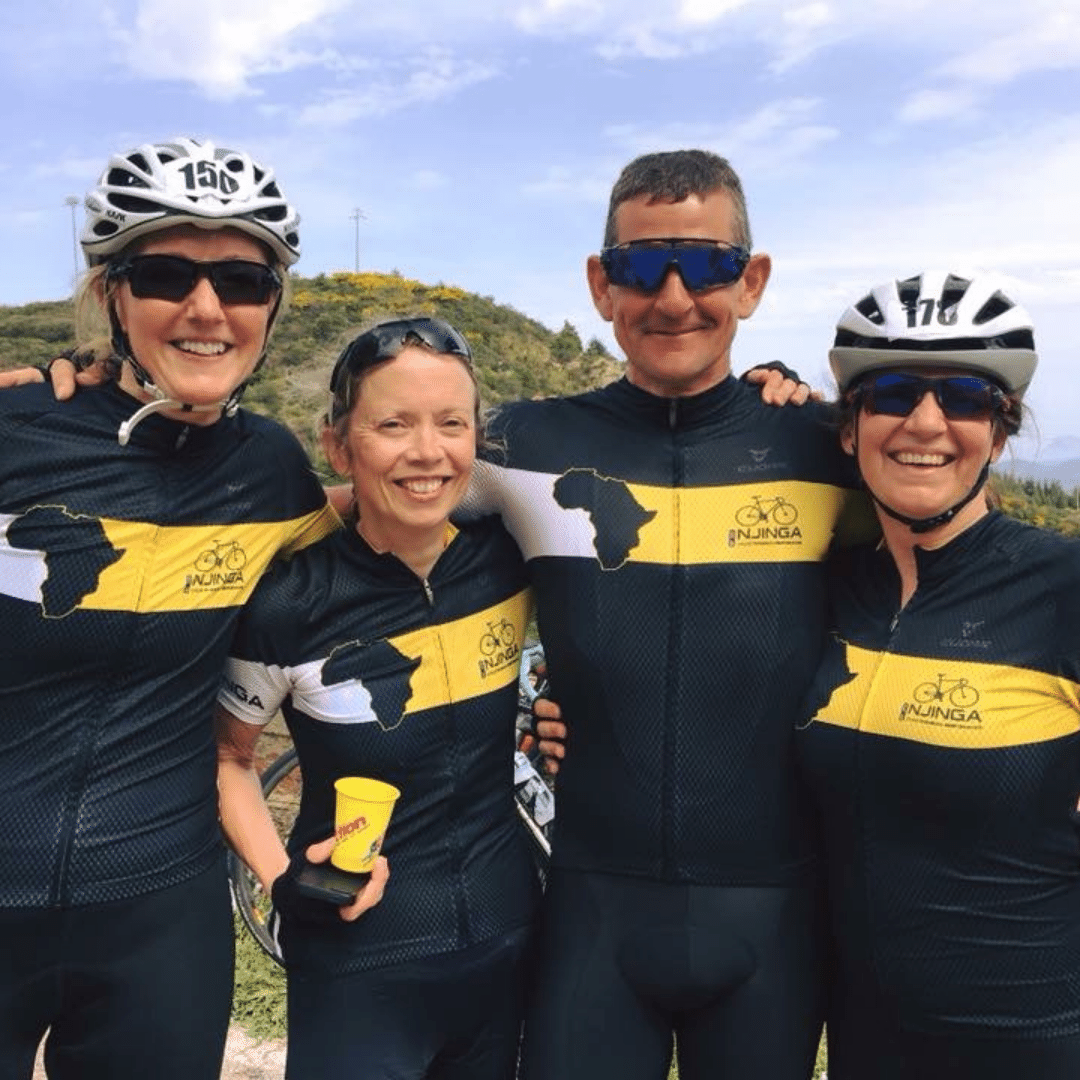 Mary at the end of completing a 6 day stage race in Sardinia. 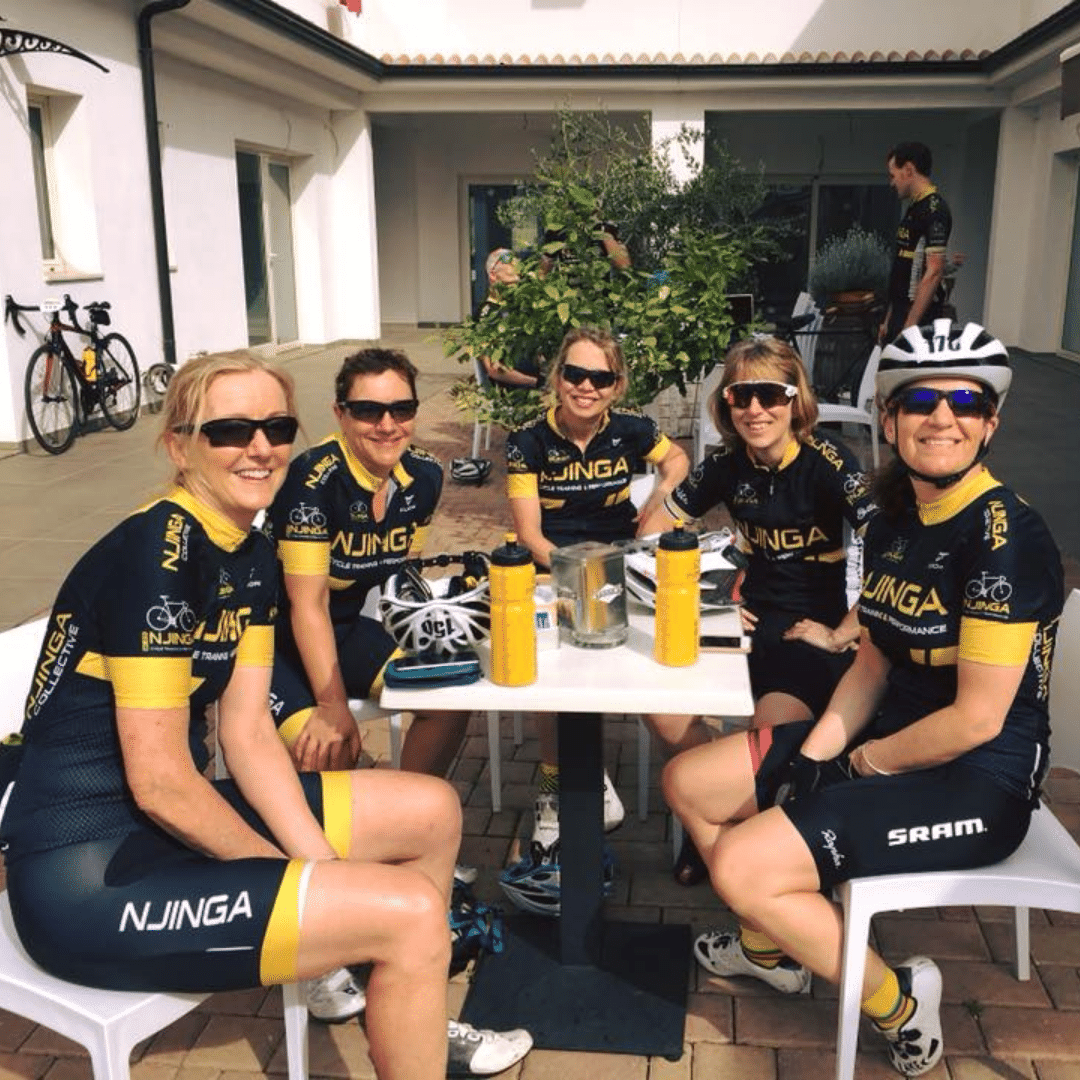 Mary during her cycling trip in Sardinia. 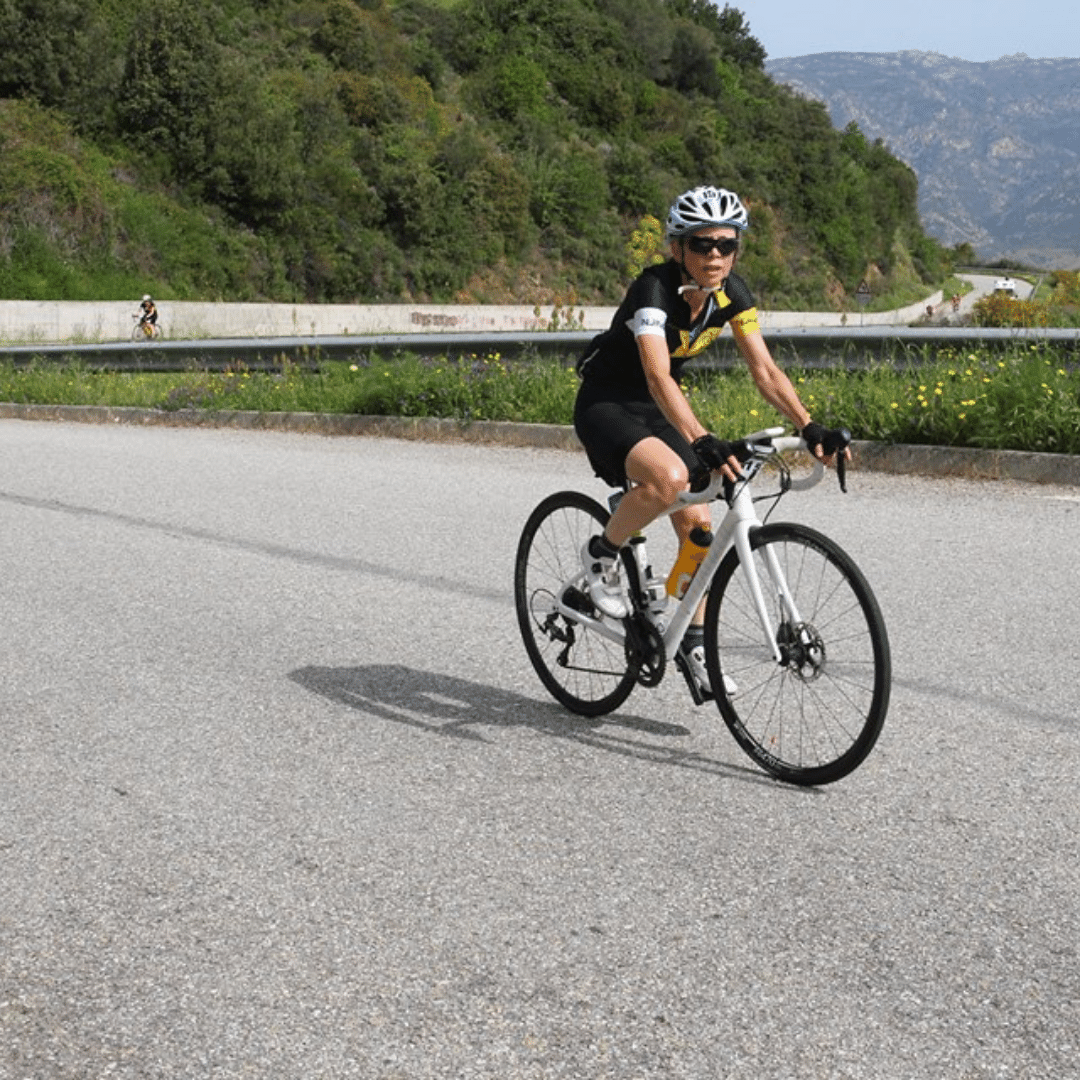 Mary cycling up the climb Santa Anna in Sardinia.

Thanks to Njinga: I've never been fitter

In summary, thanks to these guys, I've never been fitter. Thanks in particular to Josh for scraping me up and putting me back together again after some tough FTP tests.

I've learned so much about cycling and myself, and I've found something I love doing as part of a community.

I know they'll be riding with me as I continue my cycling journey and achieve new goals. 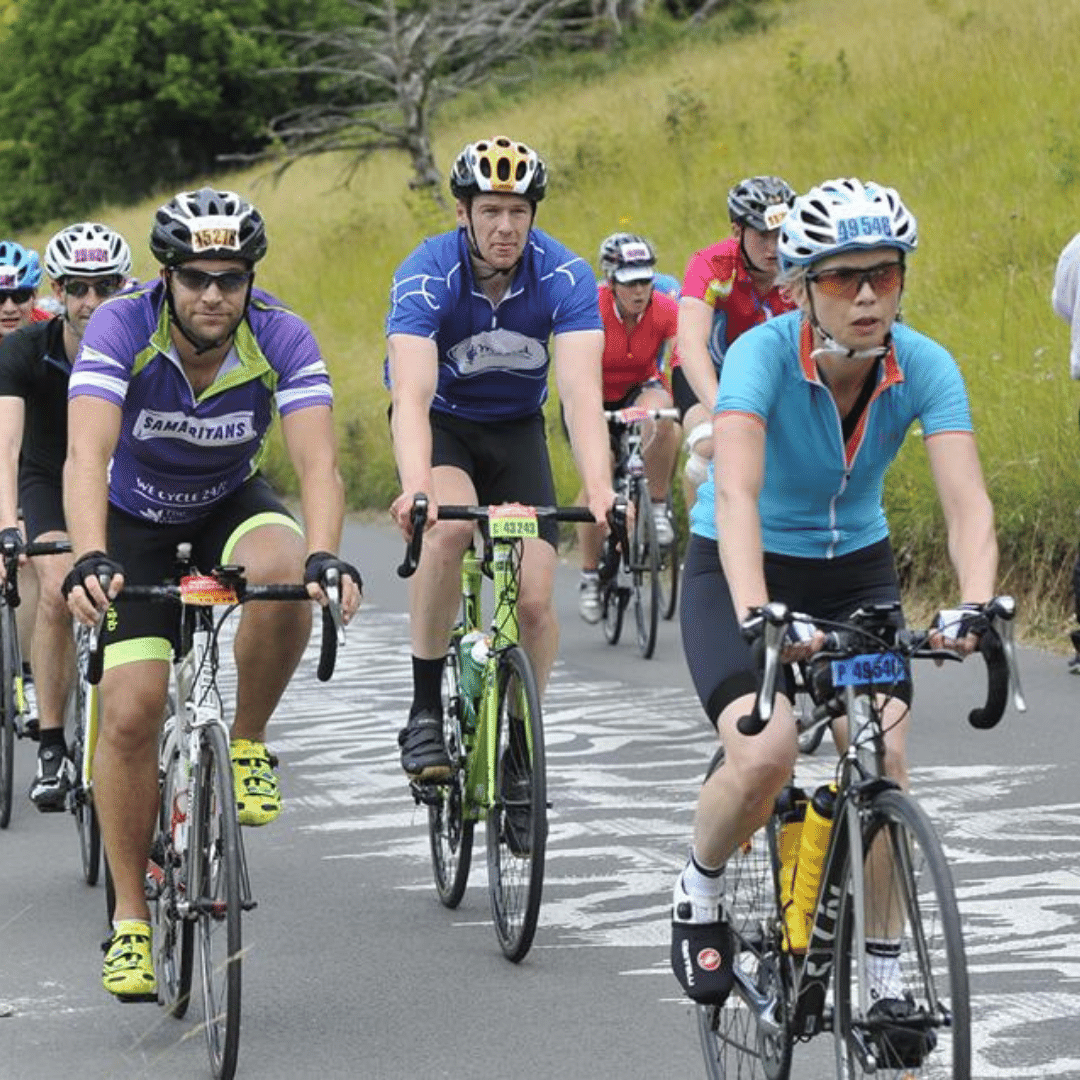 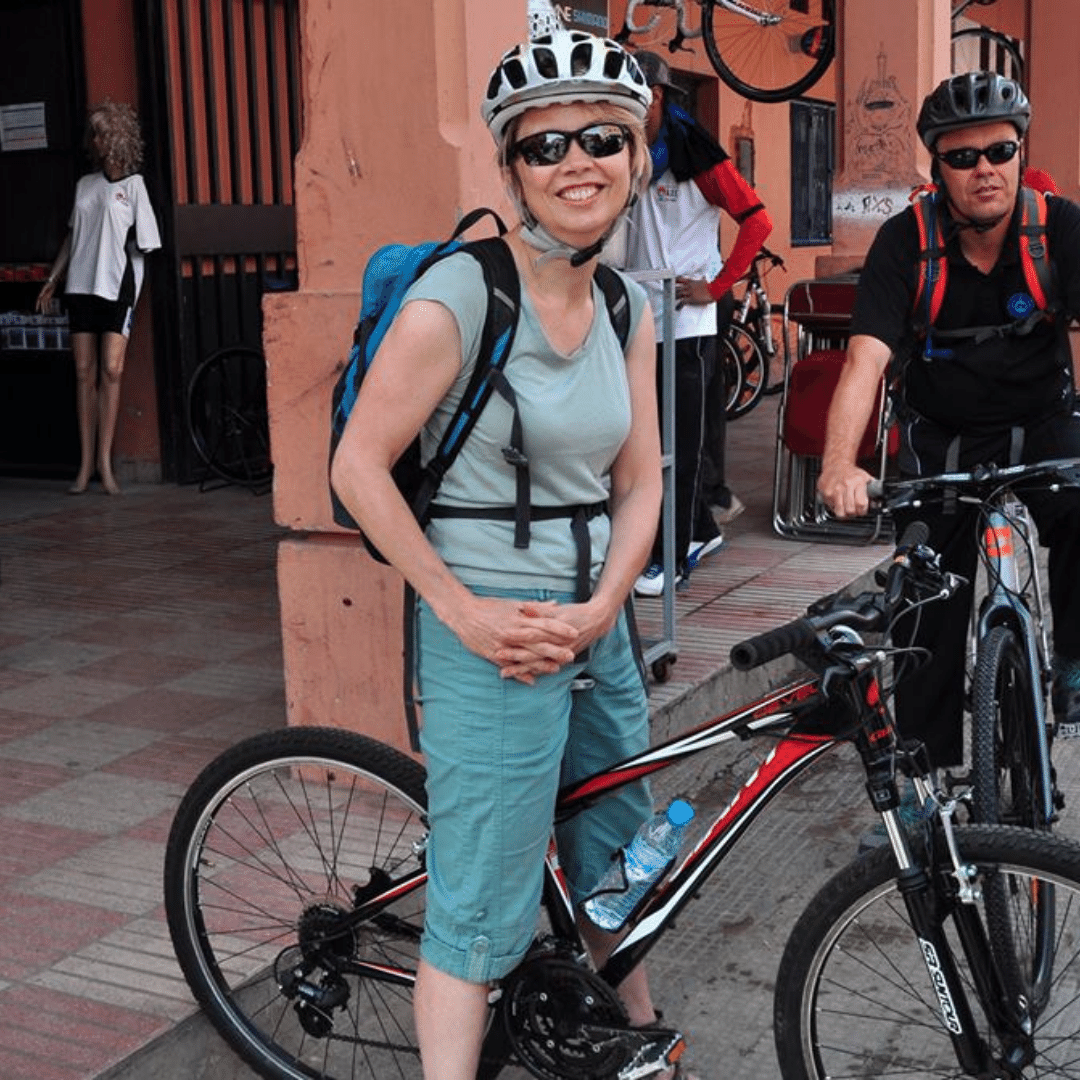 Mary on a cycling tour in Marrakech. 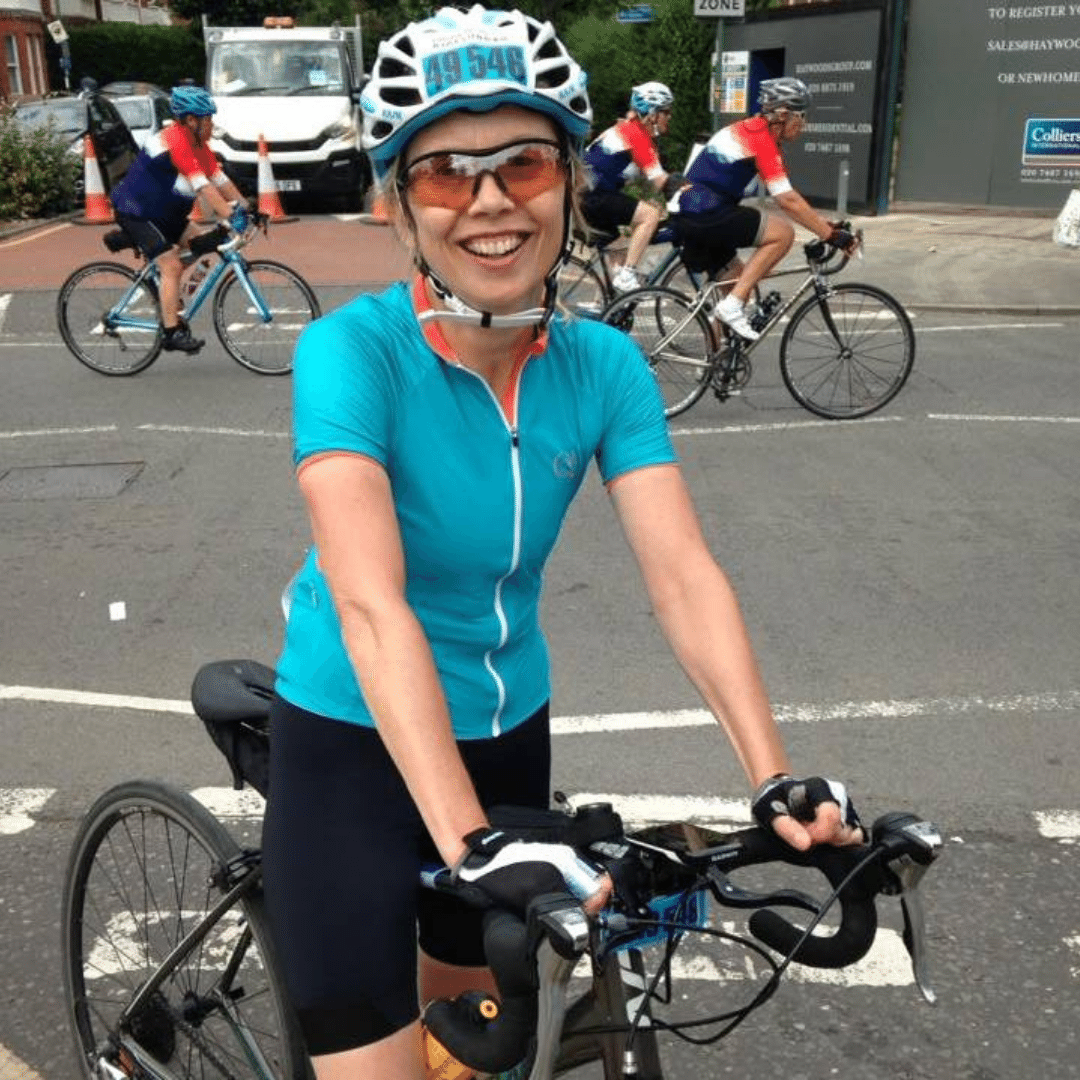 I've learned so much about cycling and myself, and I've found something I love doing as part of a community.
WHERE IS MARY NOW?