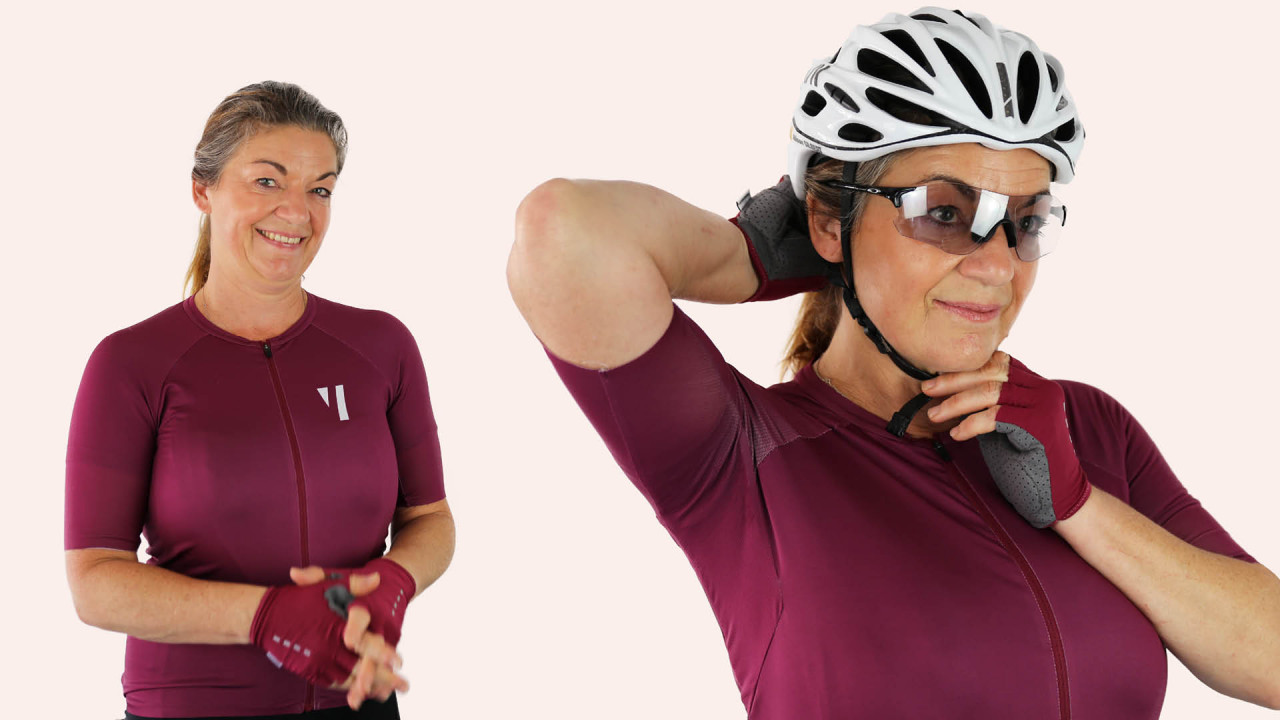 I was pushing my numbers and loving the buzz of a great session & everything that came with it: hard work, sweat, and the endorphins that pulsed through my body after every session. I felt like I'd literally found a new lease on life.
Before Njinga

My husband, Matt (also an Njinga Rider), is an avid cyclist, and at the time, before I too became an avid cyclist, I just couldn't keep up with him! Not only was I becoming a cycling widow, I was growing more and more jealous of him and this natural camaraderie he had with cycling.

At the end of summer, Matt treated me to a second hand road bike and not long afterwards, in September of the same year, I competed in my first 50-mile sportive and loved it – it was exhilarating: the sense of achievement, the beautiful ride, the cycling community and camaraderie that was now mine, too.

But my body bonked later in the day because my fuel strategy wasn't what it could have been. But that didn't stop me! I had caught the cycling bug and it was here to stay.
It felt like I flew around the course, and I must have done because I smashed my target time, coming in at 6h15m! I couldn't believe it.
Enter Njinga
By this stage, Matt had visited the Njinga Lab and had been impressed with the instructors. He encouraged me to try it out and, knowing that I'd enjoyed spin classes previously, recommended them as a way for me to improve my fitness for the bike.
Type something 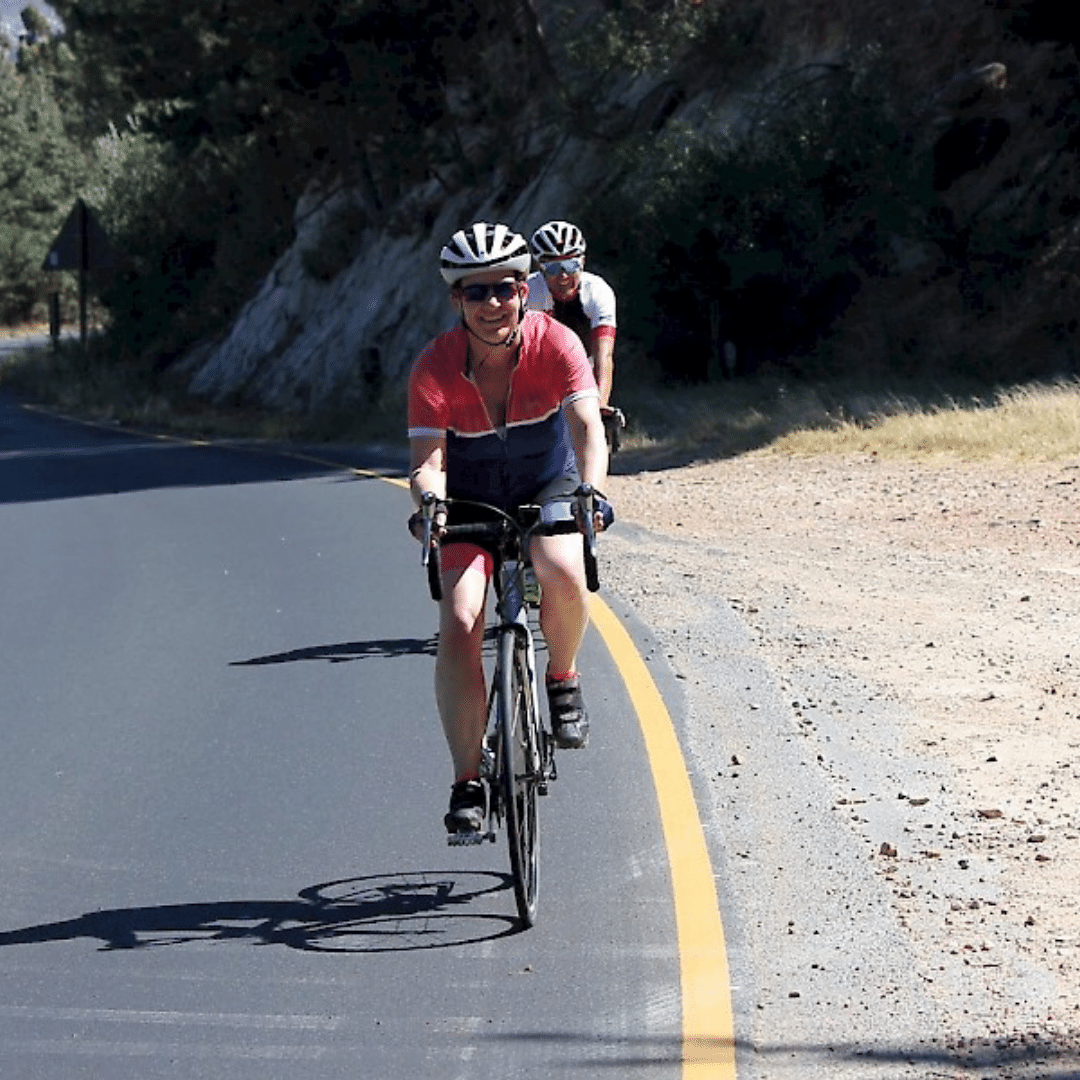 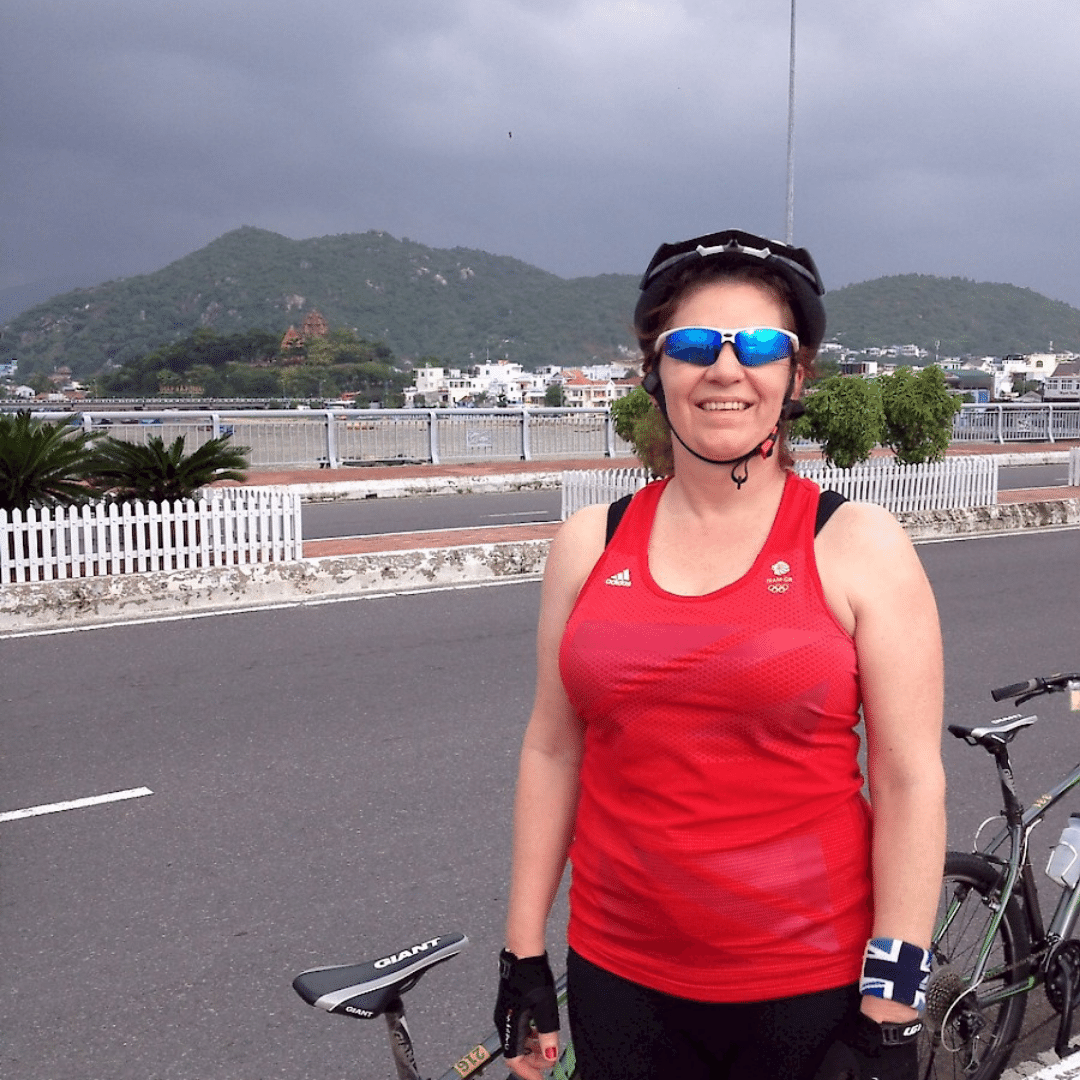 Ali at  the start of her cycling journey. 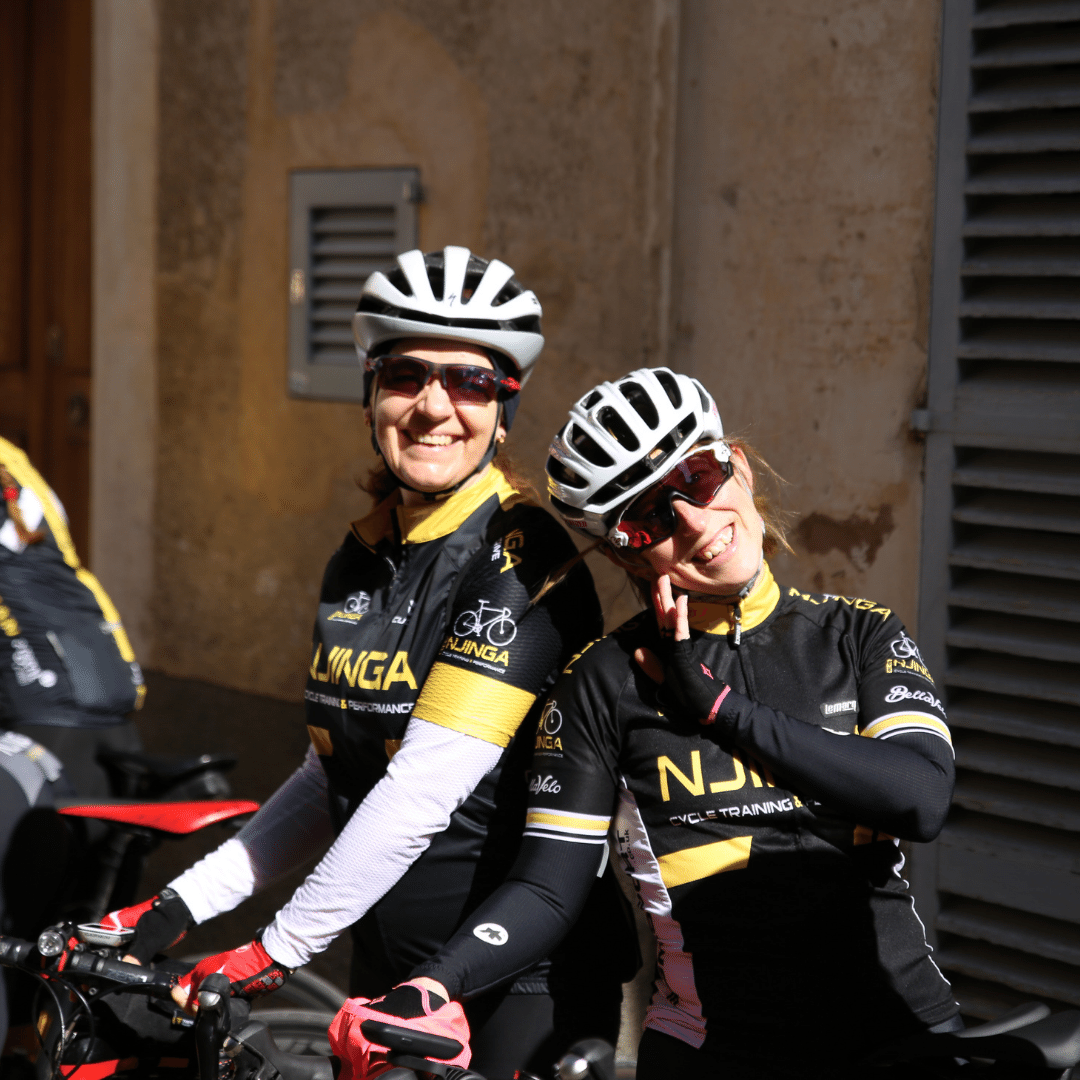 Ali with fellow Njinga Rider on our Mallorca Training camp.

It was immediately clear that Njinga's indoor training sessions were nothing like spin classes. The first few sessions were intimidating and the focus was solely on my performance. Elite athletes attended the classes, too – people pushing out four or five times more watts than me! And to top it all off, your individual power scores were up on the big screen for everyone to see! I felt in over my head and embarrassed at not just being last but being last by quite some way.

But once I realised that no one cared about anyone else's results – they were just focused on themselves – the numbers became my motivation and drive to "not leave the lab disappointed", as Josh, one of the Njinga instructors at the time, liked to say.

My first few classes continued to be intimidating – I felt self-conscious setting myself up each time and having to ask for the trainer pedals to be added, but the whole Njinga team was always super friendly and the care they took was comforting to me as I'd been injured in the past from badly fitted spin bikes.

Without an FTP test, you have to gauge your efforts at different points in the class, so sometimes I'd burn too much too early. But once I'd undertaken my first test, I was no longer second-guessing my numbers. I had a purpose and focus!

That's when I think I levelled up:

I knew what I needed to do in each class based on my fitness level and this gave me the incentive to push.

My first FTP test wasn't the only milestone that happened: I also moved in to cleats – eek! Yet again, the Njinga team were super encouraging and assured me cleats would improve my technique and I'd see small gains quickly. Within a few weeks, I'd drunk the Njinga Kool Aid.

I was pushing my numbers and loving the buzz of a great session and everything that came with it: hard work, sweat, and the endorphins that pulsed through my body after every session.

I felt like I'd literally found a new lease on life.

Plus, I found it easy to fit Njinga into my lifestyle: Multiple classes across the evening worked with my job and I could get to the Lab at least twice a week.

So while I didn't initially join Njinga to train – for me, it was about joining my husband in doing something we both loved – I found so much more in Njinga than I ever could have imagined.

I first experienced the fantastic community that makes Njinga truly special when I participated in one of their group training programmes.

There is such a breadth of people that attend:

There are twenty-year-olds and people in their sixties; men and women; athletes; and those just trying to be the best version of themselves that they can be.

The particular programme that I enrolled in was made up of very different standards but it didn't matter. We all had our own targets and the encouragement of everyone was all for the same purpose: to improve and get stronger. We spent eight-weeks training twice a week together and the buzz and sense of achievement at the end was amazing. We had created an unbreakable bond and I made some great friends. I improved my FTP considerably on the programme, too! 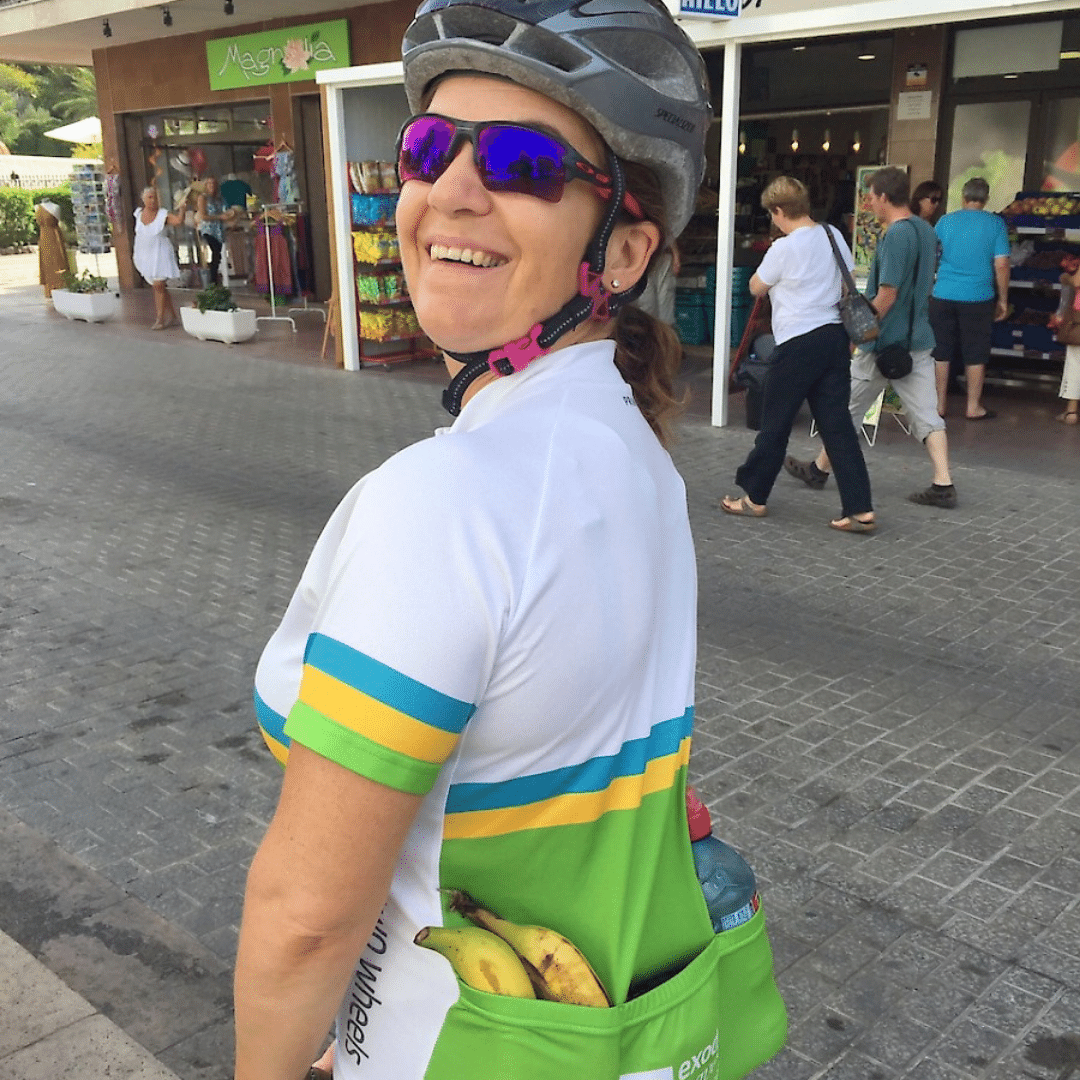 Ali at the start of her cycling journey. 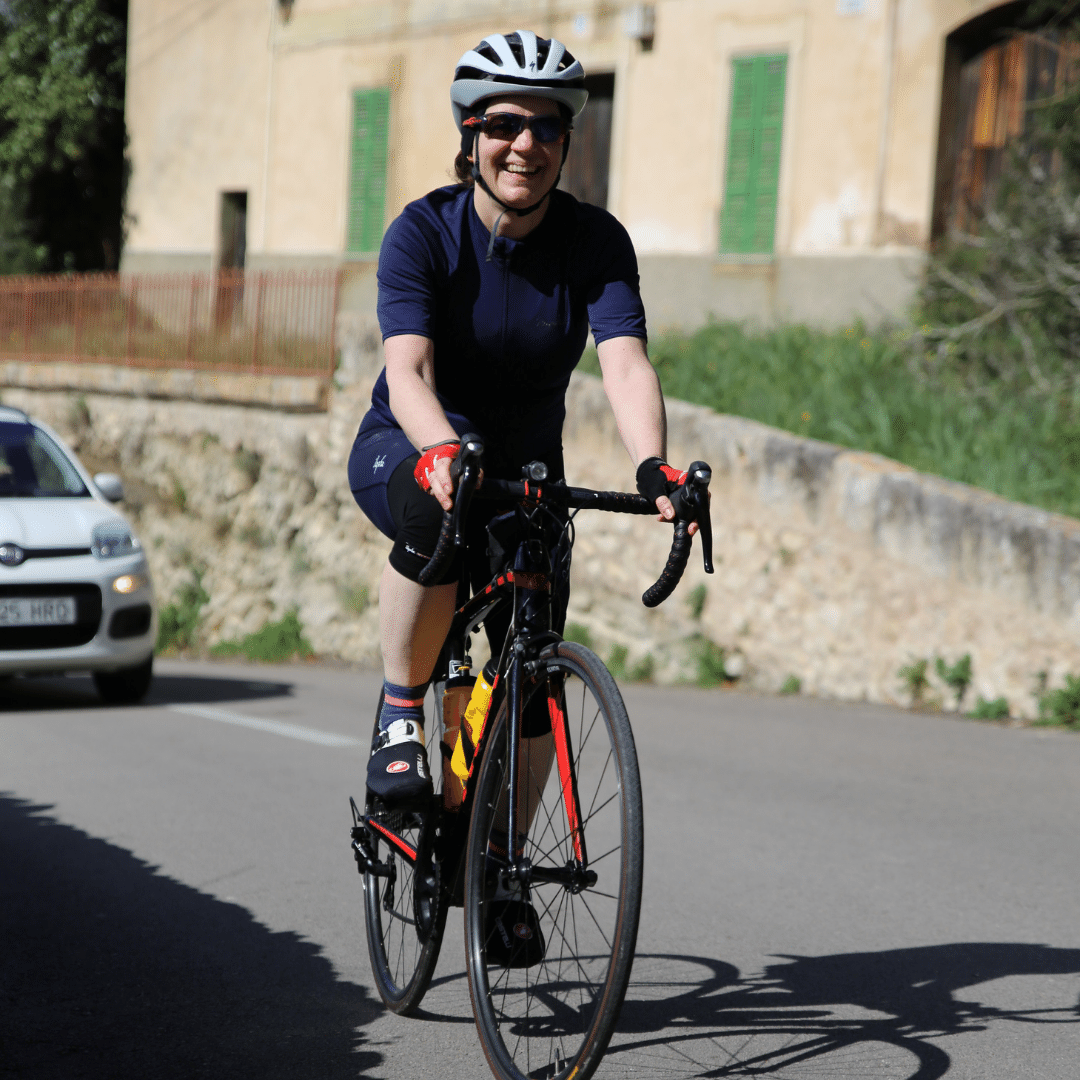 Ali on our training camp in Mallorca. 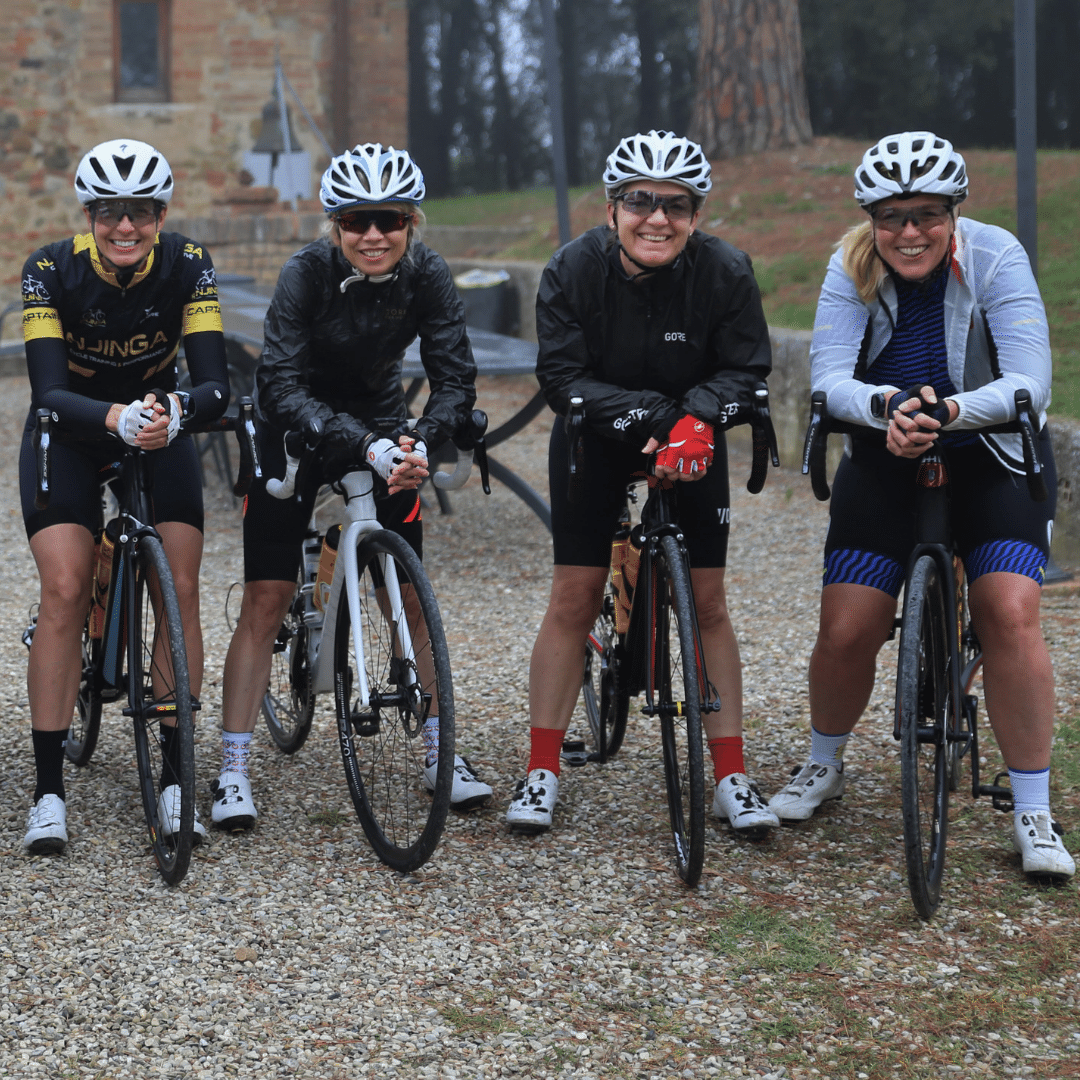 Ali on our end of season social to Tuscany with fellow Njinga riders.

Something I didn't expect to learn so much about from Njinga is nutrition.

I've learnt how to fuel my body on the bike and what to consume pre-and post-rides.

Njinga has shared some tasty meals (their beetroot burger recipe is amazing) and their made-from-scratch snacks (the date and coconut balls are great) provide the energy and fuel needed for a fast recovery. I've also had nutrition consultations with Leigh which led me to eliminating gluten and dairy from my diet – this had made a huge difference to my on-and off-bike performance.

Njinga's co-founder and head performance coach, Togo, believes in helping make any and every cyclist the best they can be, and this has been true of his work with me, too.

I've had a great year:

- Every time I go out, I seem to see improvements in my Strava times;
- I've knocked three minutes off my Richmond Park lap time – winning my local bike club's May Challenge;
- I've improved my Box Hill time by two minutes; and
- I've progressed in the Njinga Collective – Njinga's not-for-profit outdoor cycling club – moving from Mbidzi group to the faster Njati peloton.

Moving into the Njati peloton has felt like a real achievement: To go out in this new group with some fellow group training graduates who'd been on a similar learning curve to me. 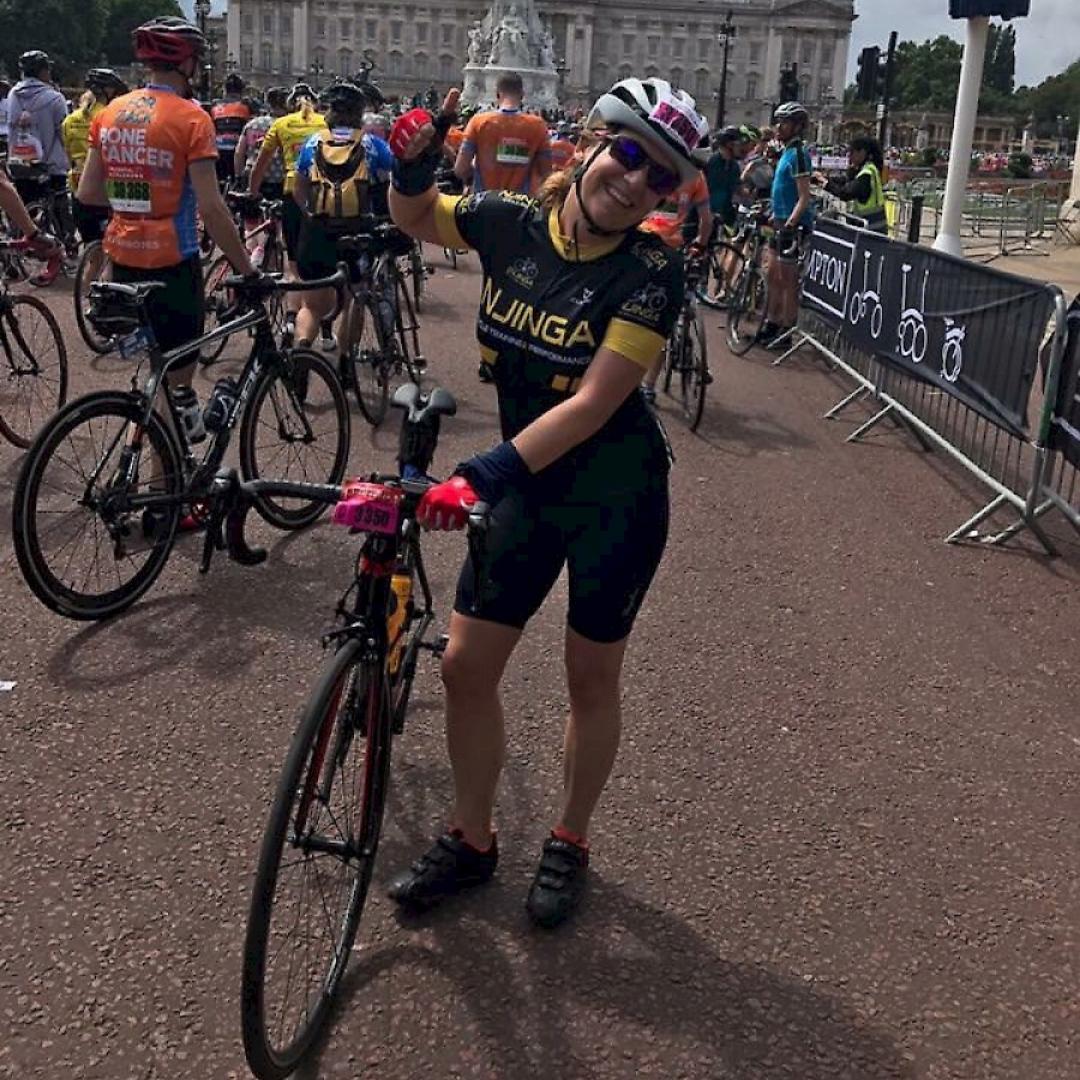 Ali having completed the 100 miles of the Ride London Sportive. 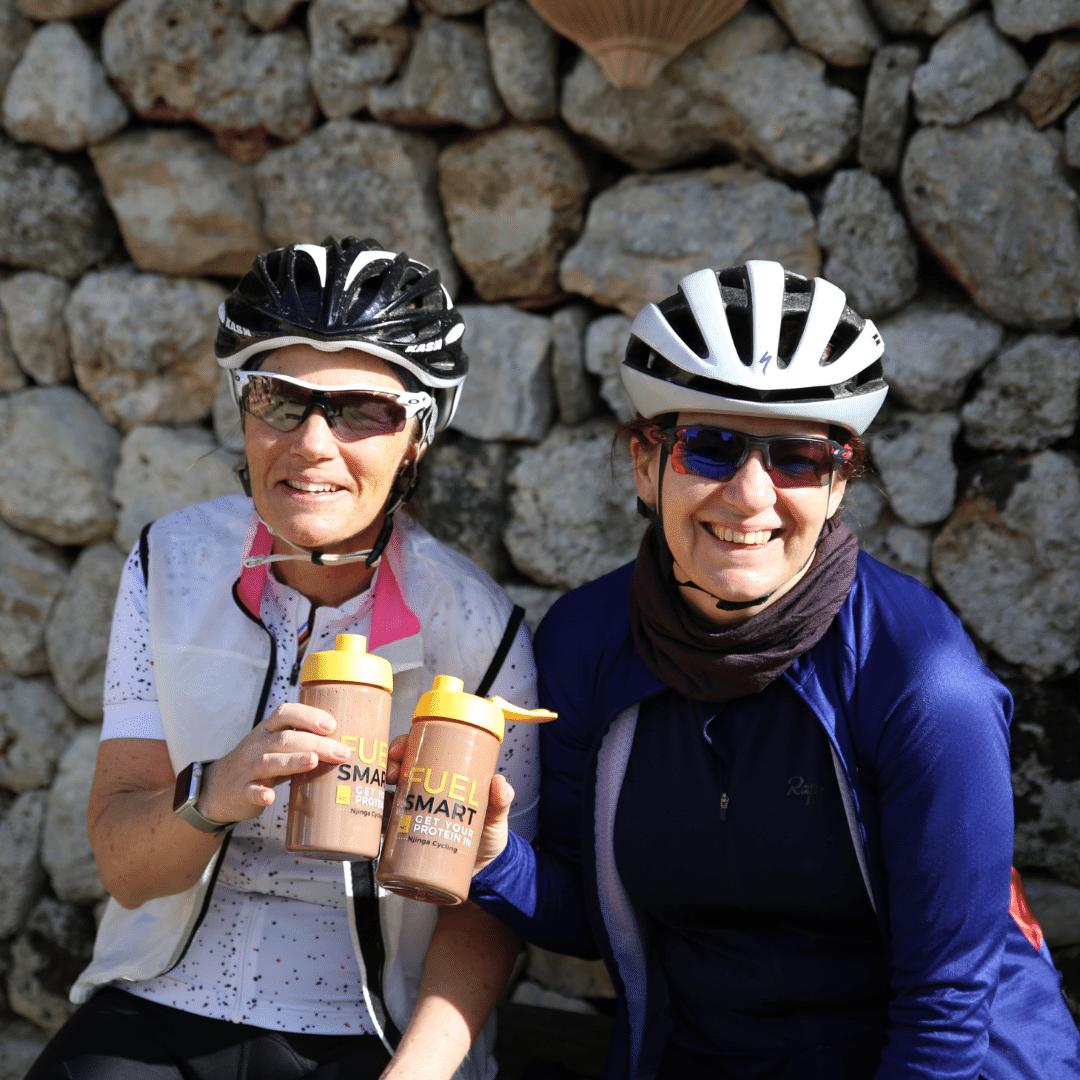 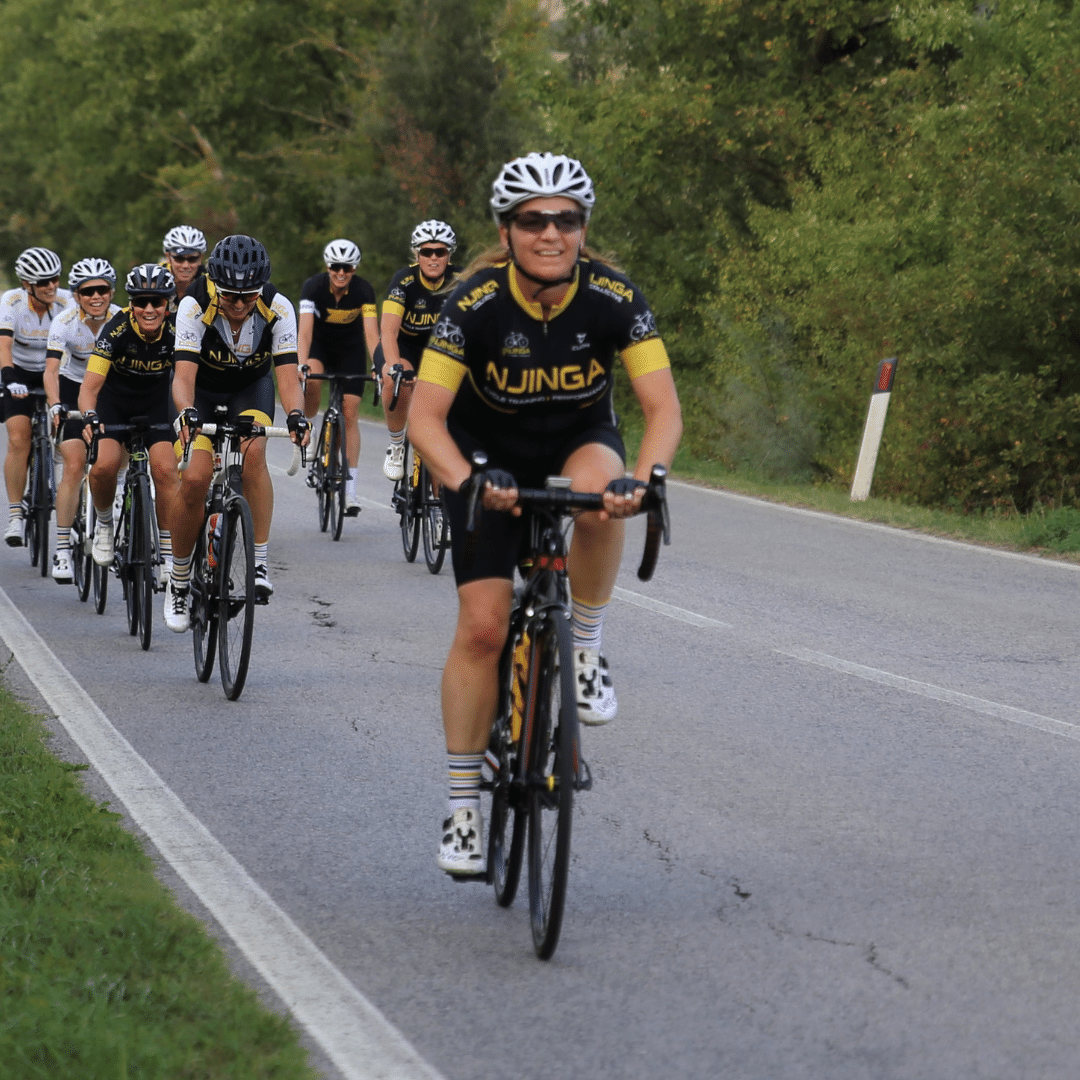 Ali on our end of season social in Tuscany.

At the start of the year, I set myself some goals, one of which was to complete the 100 miles of Ride London in 6h30m.

With the foundations and training I'd put in with Njinga I knew this goal was within my grasp!

In the run up to the event, I was quite anxious and I kept wondering whether I would actually be able to achieve the target time I'd set. Maybe I'd been over-ambitious – I didn't want to let myself or my coaches down. I met some fellow Njinga riders at the starting gate which settled my nerves, and we were off before I knew it!

It felt like I flew around the course, and I must have done because I smashed my target time, coming in at 6h15m! I couldn't believe it.

I'm so proud of what I achieved that day. I know I worked hard to get that result but it was also down to the amazing support of the team at Njinga which was never more evident than on that day: the whole team was out cheering us on at the Njinga corner on the way out to the hills as well as on the way back through Kingston. It was such a fabulous reminder of what a great community I've become a part of.

Njinga, you're awesome! I consider myself so lucky to have found you, your wonderful cycling community, and the new and great friends I've made since I joined. Thank you.

I knew with the foundations and training I've put in with Njinga that the achievement of this goal was within my grasp!
WHERE IS ALI NOW?