How Njinga training programmes helped Andrew come back from injury to conquer the iconic Mont Ventoux twice in 24 hours.

Right away, I knew I’d made the right decision to tailor my training with Njinga.

I joined Njinga as a recreational cyclist and they sparked a self-belief in me I didn’t know existed, and it started from the motivation and knowledge I gained through completing their FTP Booster programme, a group indoor training programme. It left me feeling much fitter, healthier and more energised, and 8 weeks later, I found myself hungry for an epic cycle challenge I hadn’t even considered before Njinga planted the seed.

Every session was challenging and tough. But with each one, as my numbers improved, I felt my confidence and stamina grow.

The biggest one? To ride Tour de France’s Mont Ventoux. I knew two things: it would be tougher than anything I’d done before, and that the reward would be worth the sacrifice.

With the solid cycling foundation Njinga’s FTP programme helped me build — including base-line knowledge on pedal technique, understanding wattbikes and, most importantly, building my FTP score — I felt confident. I’d gone up 39 watts in my FTP score to 240 watts and seen a 20% improvement and made the All Time Njinga FTP Improver Leaderboard.

And then on holiday disaster struck: a ski accident that left me with only seven weeks to prepare for the ‘Beast of Provence’. I thought that was it — I’d have to throw in the towel and maybe try again the next year. Then I recalled that, alongside their regular training sessions, Njinga also offers multi week bespoke training programmes. Having already done an Njinga programme, I knew what to expect and felt excited: scientific-based, razor-focused, efficient training with no junk miles in sight. It was the best chance I had at getting myself ready for a ‘hors categorie’ climb (the French term used in stage bicycle races to designate a climb that is "beyond categorisation") in under two months. 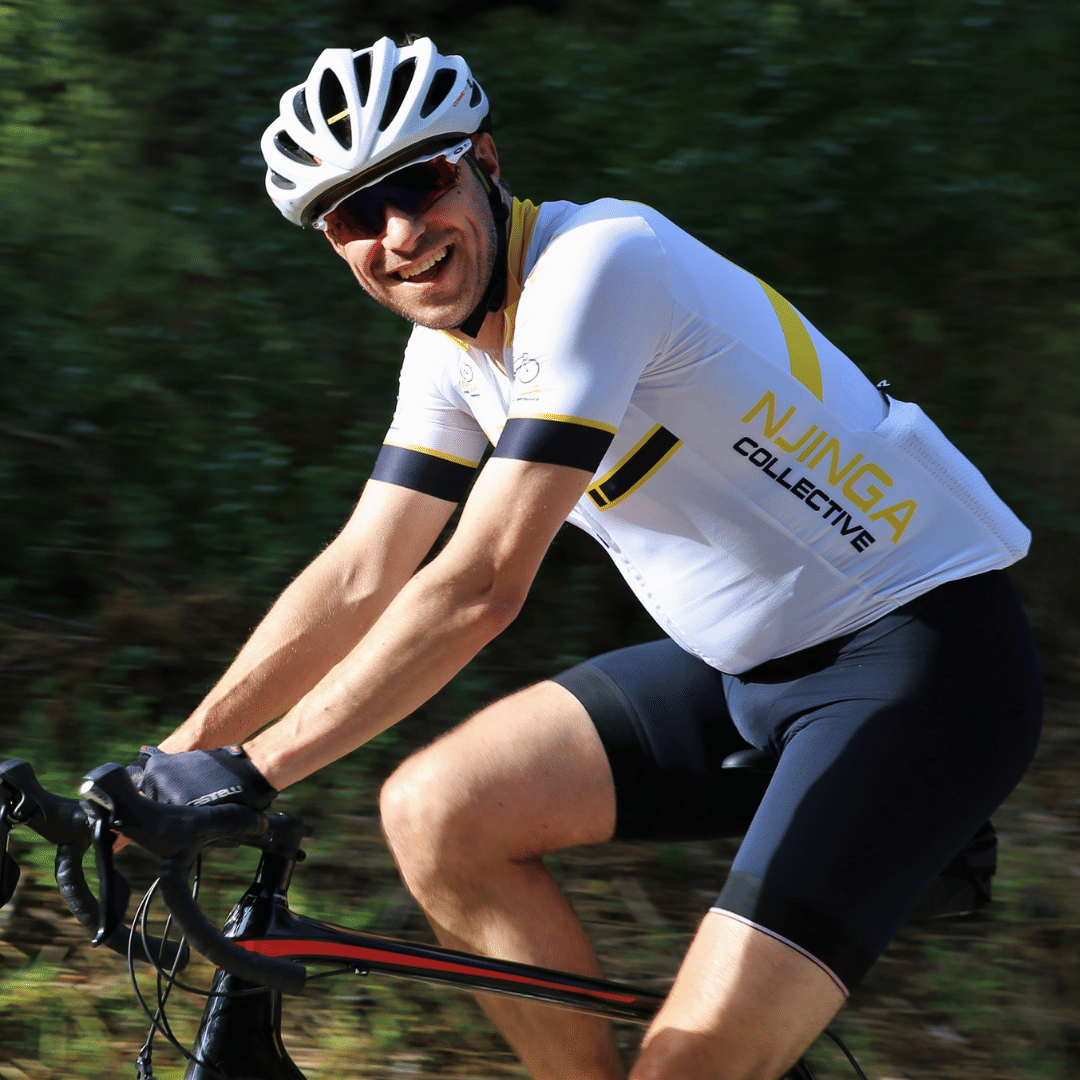 Andrew on our Challenge Ride No.3 in Girona. 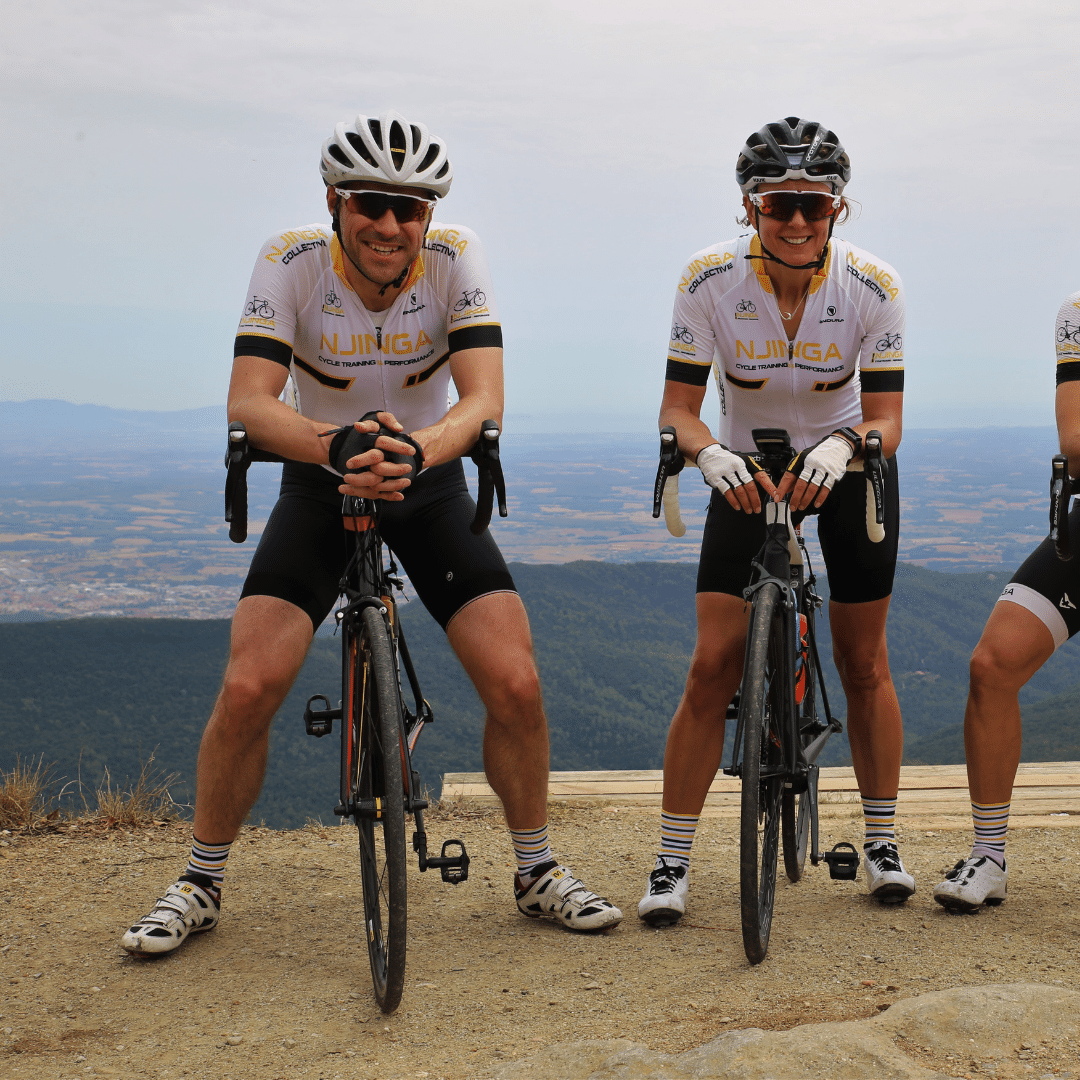 Andrew at  the top of Cat 1 climb, Rocacorba, in Girona on our Challenge Ride No.3. 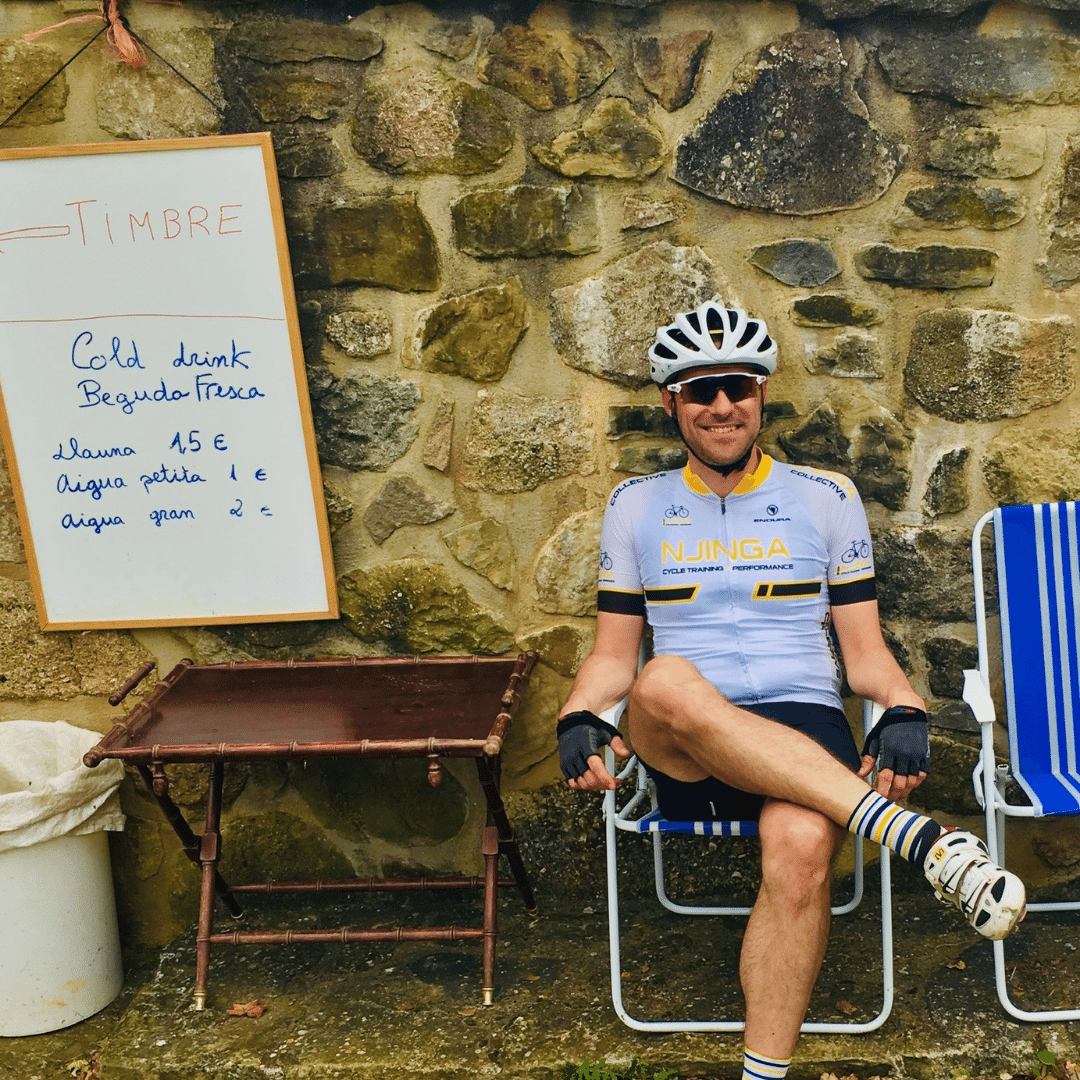 Andrew on our Challenge Ride No.3 in Girona.

Having already done an Njinga programme, I knew what to expect and felt excited:

Scientific-based, razor-focused, efficient training with no junk miles in sight.

It was the best chance I had at getting myself climb-a-giant-mountain-ready in under two months.

At the beginning of the programme, I was given a clear training guide that laid out all the training sessions I’d take and detailed how and why they'd help me build towards my Mount Ventoux goal.

Right away, I knew I’d made the right decision to tailor my training with Njinga.

From the core aspects of the plan — the bespoke strength and climbing focused sessions, the comprehensive nutritional advice on when and what to eat to fuel my training — to the small stuff, like my favourite Wattbike always being reserved for me, the programme was exceptional.

At the end of each training session, I was provided with detailed stats on my heart rate, power, effort levels, and more, so I could tangibly track the data and review my progress with my Njinga coach. Every session was challenging and tough.

But with each one, as my numbers improved, I felt my confidence and stamina grow.

More than that, what makes this programme truly irreplaceable is the feeling of community and support that thrives at Njinga.

The coaches are also constantly ensuring you are training smart, sticking to your power zones while giving you that extra encouragement and motivation to keep you going. Mindset is big at Njinga and the coaches work with you to help you build your mental strength and resilience during training sessions so when disaster strikes you know how to handle yourself. They teach you to not only believe in yourself but how not to give up and get your brain to think differently by breaking things down into manageable chunks. You soon learn how the right brain functions differently to the left brain.

The stats don’t lie and in 7 weeks I managed to regain my cycling fitness quickly and achieve a 232 FTP score. Although falling a few watts short on breaking my FTP score record prior to the injury, I felt strong. Another big positive was seeing my pedal technique improve and for the first time ever I was 50-50 leg balance of power. The rehab and stretching was working and I felt so much more efficient riding the same gear pre injury on the wattbike but now producing more power. This gave me the confidence for the challenge ahead.

The Climb: Mont Ventoux Has Arrived

There was no denying that Mont Ventoux would be an exceptional challenge, but I felt ready. If nothing else, I’d get to breathe in the French countryside, experiencing its epic beauty from my bike alongside my newfound Njinga mates.

Seven weeks after starting my bespoke training with Njinga, and only twelve weeks after I thought it impossible, I cycled up and down the most spectacular mountain I’ve ever been lucky enough to see, let alone climb. 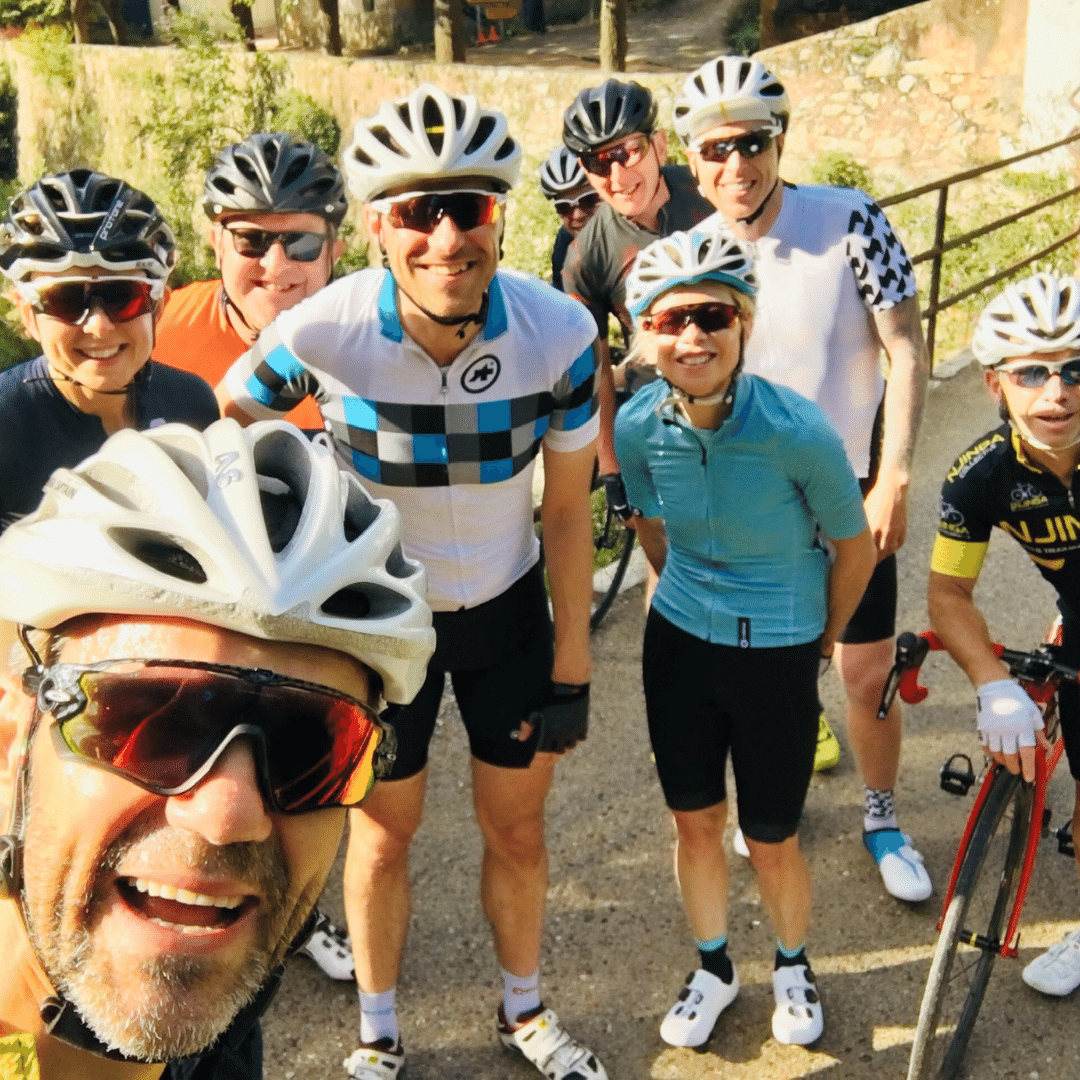 Andrew with fellow Njinga riders on our Challenge Ride No.3 in Girona. 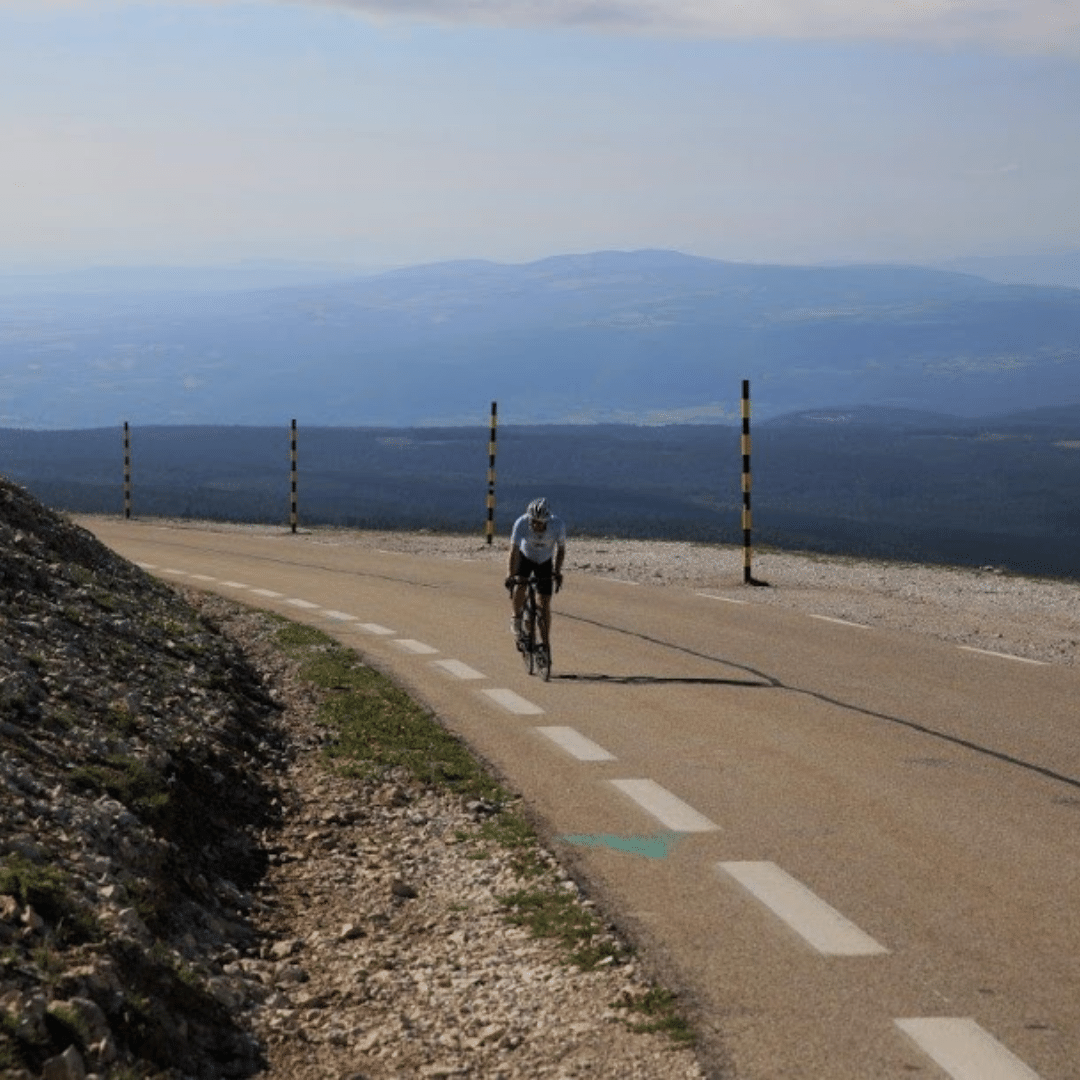 Andrew on his way up Mont Ventoux, that he went on to conquer 2 times in less than 24 hours. 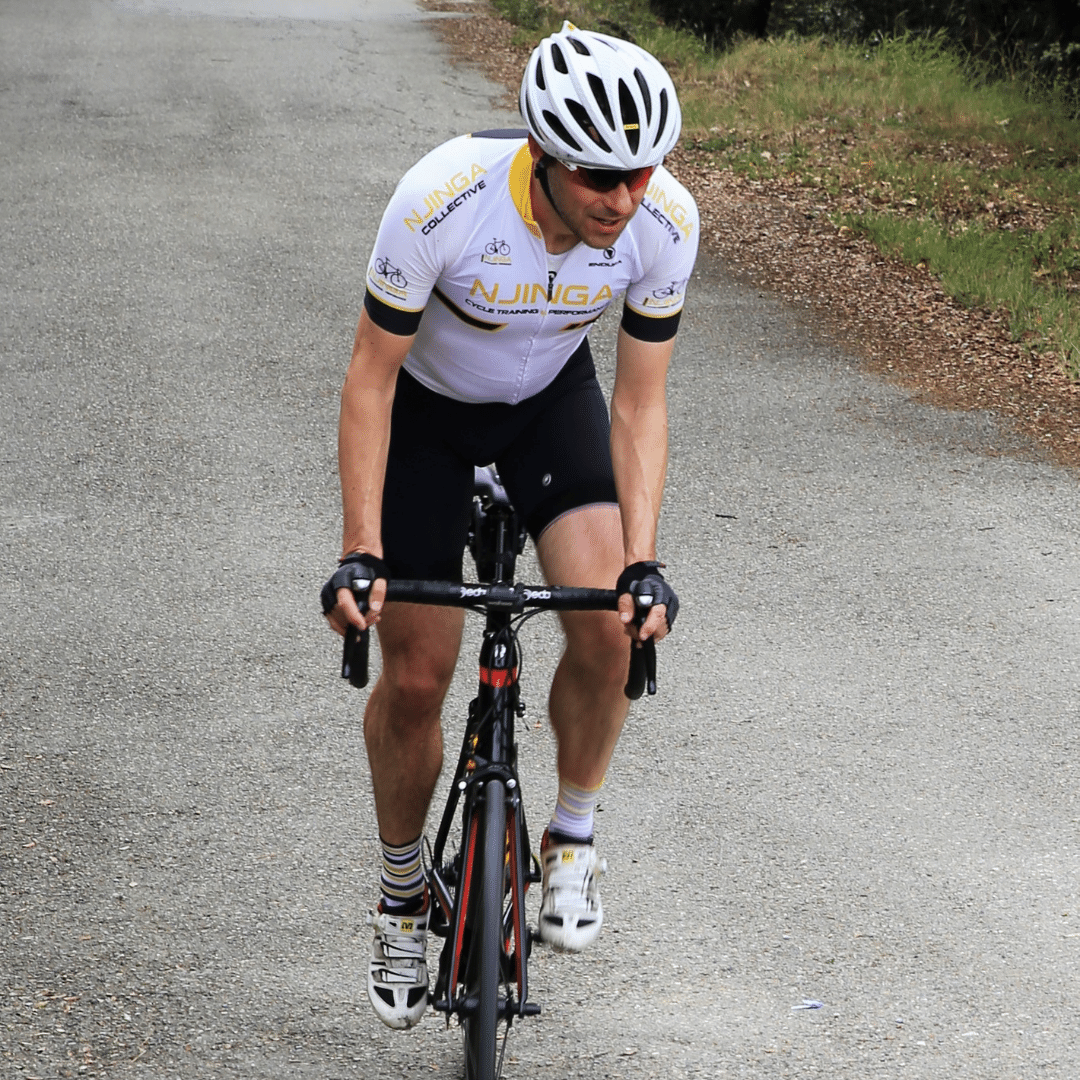 Andrew Conquering the Cat 1 Climb, Rocacorba  in Girona on our Challenge Ride No.3.

I mean it when I say: I couldn’t have done it without the Njinga crew.

Both their expertise that went into my bespoke training and their companionship along the way. Their passion, drive, and support got me to the top of that mountain. Twice. 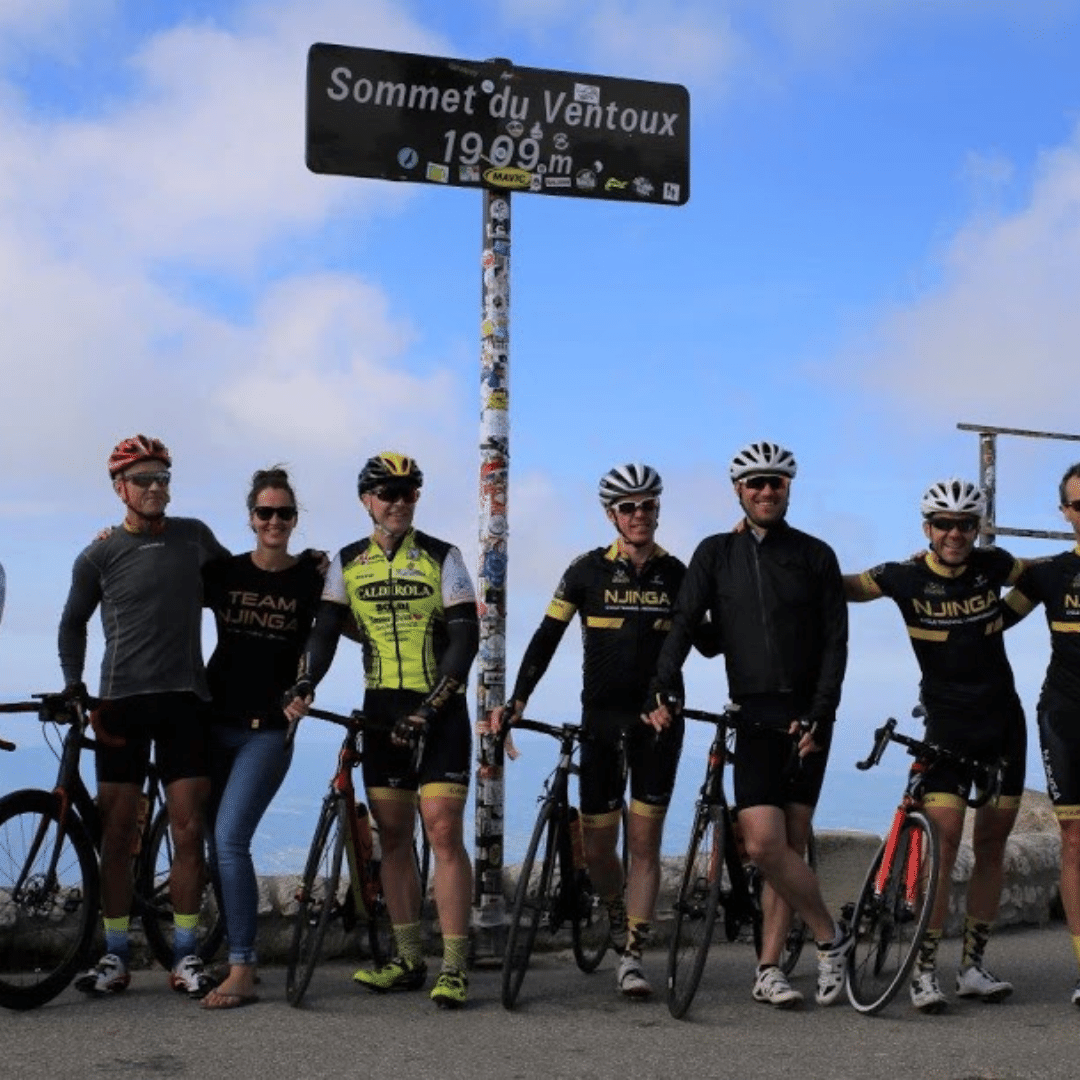 Andrew at the top of Mont Ventoux, having conquered the climb twice on our Challenge Ride No.2. 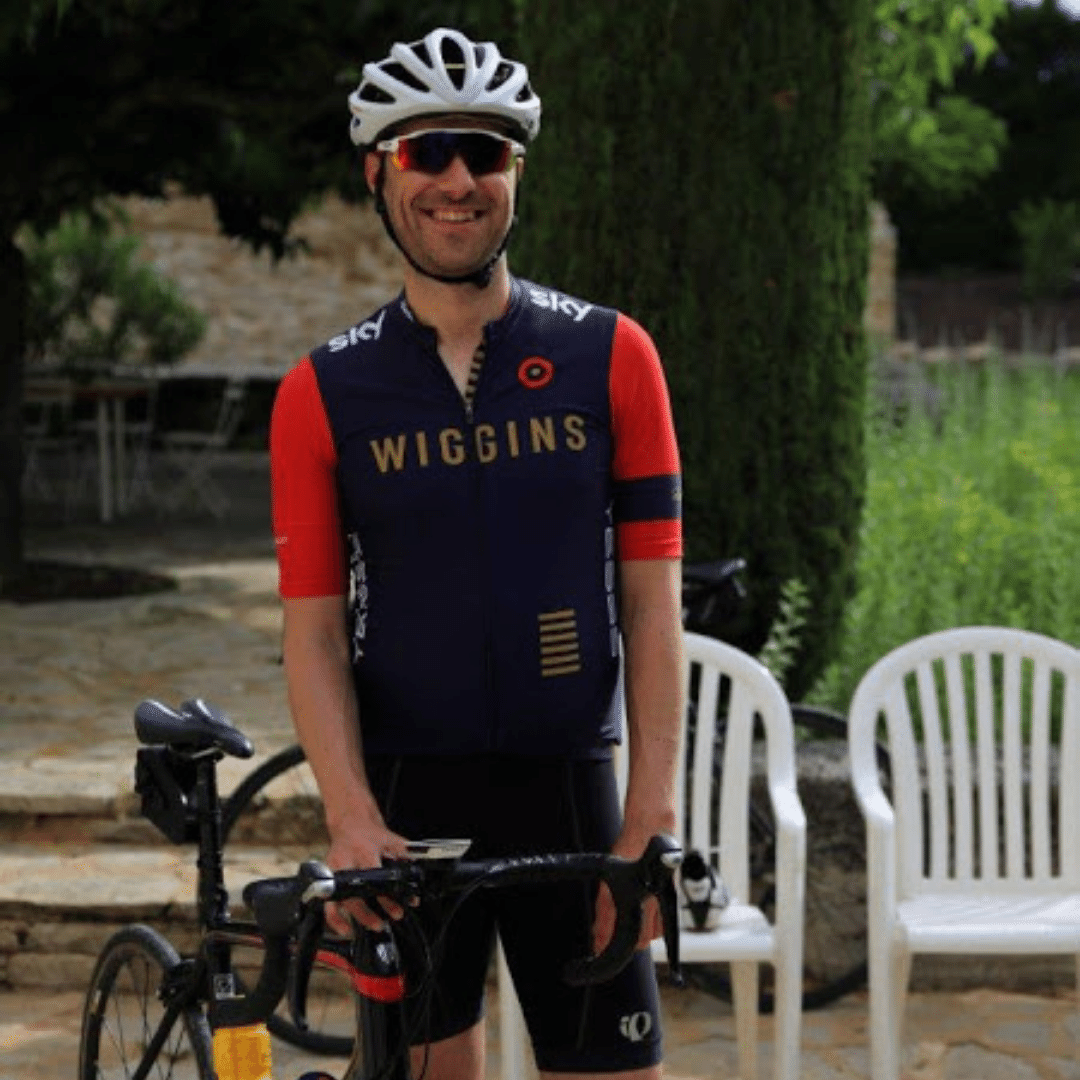 Andrew on our Challenge Ride No.2 - The Ventoux Triple. 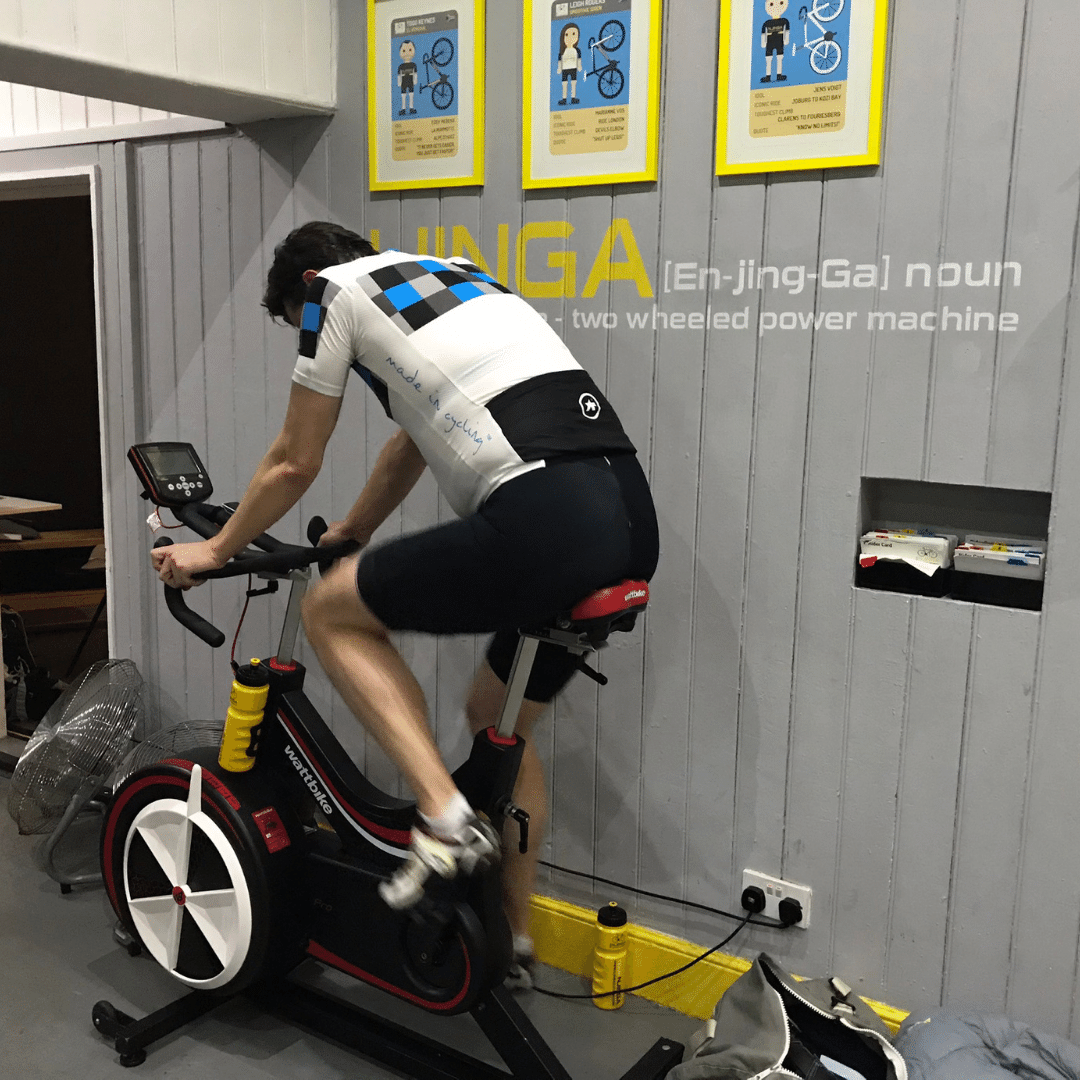 Andrew training in the Njinga Lab as part of his Bespoke Indoor Training Programme.

Their passion, drive, and support got me to the top of that mountain. Twice. Njinga, thank you.
WHERE IS ANDREW NOW?

What a comeback story after such a horrible ski accident! Andy’s cycling journey from a recreational cyclist and fair weather commuter to a hors categorie climb conqueror has been nothing short of inspirational. All his hard work and dedication paid off and his journey with Njinga has continued to see him improve.

Andy also joined the Njinga Collective, our not for profit cycling club and moved up the peloton ranks from group 3 (Njati - 14mph) to group 1 (Kalulu 16+ mph) pace and last year he trained with us and did his first multi day stage race in Italy representing Njinga at the Giro d’Sardegna.

The stats speak for themselves: Andy’s strength, speed and stamina has continued to improve and his FTP score is now staggering 89 watts up since he started with us 2 and a half years ago. He currently has a new FTP score PB of 290 watts and improved his power to weight from 2.43 to 3.61 watts per kg.

On top of this Andy has lost 8.3kgs / 18 pounds in weight since he started training with us as well. What a transformation! So proud of Andy and how much he has grown as a cyclist both on and off the bike.